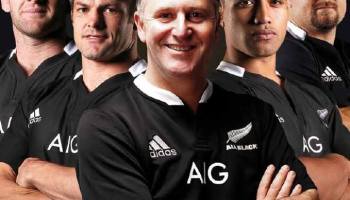 What we need now is weeks of intense outraged Rugby frame-by-frame navel-gazing headlines screaming at injustice of a draw for a game barely anyone else on the planet plays.

That would be most excellent

As a very young and juvenile country, New Zealand has all the cultural maturity of a can of day old Coke. Rugby dominates our sense of identity like a jealous tyrant. This myopic focus allows Kiwi’s to distract themselves to the point of outright denial over the numerous social ills currently rotting our society.

We have 41 000 homeless, a suicide rate that critics claim is 3 times higher than officially acknowledged, over 10 000 now in prison, 250 000 children living in poverty, 1600 dying each year from cold houses, 550 000 living with extreme hardship and generations locked forever out of home ownership, but none of that matters because we are the best in the world at a game very few other nations seriously play.
The total dominance of toxic masculinity rugby over our civic landscape can be seen in the enormous amount of rugby players who 9 times out of 10 manage to avoid any conviction of any crime because of the pedestal they are placed upon and the anecdotal evidence that tells us Women’s Refuges become full as domestic violence follows any big All Black’s game.
Other country’s play Rugby as a skilled game they wish to master, in NZ we play rugby as a frenzied pursuit to win at all costs so as to avoid the painful empty shallowness of our country beyond the rugby field.
No one needs to lose as badly as New Zealand does.