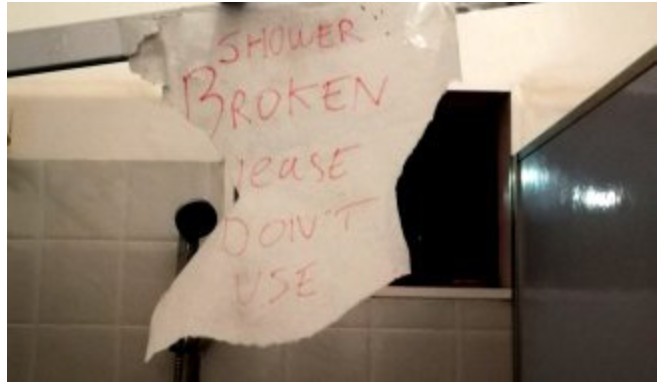 A few days ago, headlines appeared supposedly “exposing  a rort” by the NZ Labour Party to exploit American interns for electoral campaigning purposes;

The “Shock! Horror!” story occurred at the worst possible time for Labour and  the Opposition, as National was being held to account for attempting to  cover up the Todd Barclay Tape scandal and possibly perverting the course of justice; 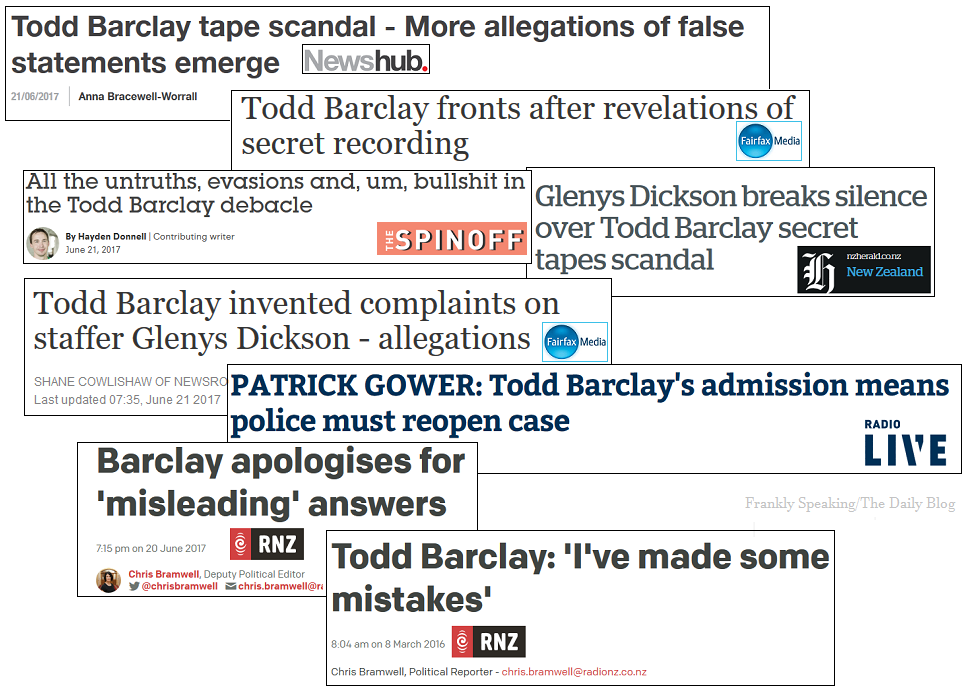 The facts behind the “headlines”

However, as the initial media frenzy subsided and gave way to a closer look at the allegations, the narrative soon changed from “slave labour conditions“; “substandard conditions“; and “a cramped marae with no working shower” – to some actual facts.

“ We don’t know what the organizers promised our guests but we are like any other marae we only have the facilities we currently have.

We don’t think our facilities are substandard although we are not a five-star hotel. We are working on developing our marae facilities to cater for the influx of schools, community and internationals.

Our role is to manaaki and awhi our manuhiri. If the organizers choose better accommodation that’s fine by us, we wish the young people all the best for the future as many of them have become our friends.”

Anthony Wilson appeared on TVNZ’s Q+A on 25 June, and further rejected the smears against his marae;

“ What was not being told was we’ve got eight showers. It’s not like that we only had one shower. And the other thing – the broken cabinet. We get broken things all the time when we have groups of this sort of size and nature using our facilities all the time. So we kind of resent the implications of disgruntled students trying to make a point out of this. I believe it’s quite good now that some of those stories have been outed. I’ve seen a few articles just recently now where the students have actually come out and defended the marae and saying that they had a wonderful time and also the facilities were adequate for what they required.”

The Politik story seemed bemused by the tasks expected from volunteers;

“They were told that they are broken down into teams- they will be either phone soliciting ( they’ve bought 30-ish Alcatel phones, and they sit in a room and call, from this marae, very disorganised, many of these people have been called already ) , door knocking in regions in Auckland, or approaching universities and “unions” to recruit votes ad more volunteers. They have one day of ‘training’ tomorrow. There is nothing else planned for these guys as far as I am aware.”

As a volunteer for the Alliance in the 1990s, this is precisely the work that this blogger, and thousands of others around New Zealand, carried out in the 1999 and 2002 election campaigns; “drudge” activities such as door-knocking, phone calling, leafletting, putting up billboards, staffing stalls; etc.

Unpaid volunteer work is not restricted to parties on the Left.  This is a page from the National party website* outlining what work unpaid volunteers are asked to carry out;

The Maori Party – which slammed Labour’s use of  volunteers as “slave labour” – also has a webpage touting for unpaid volunteers; 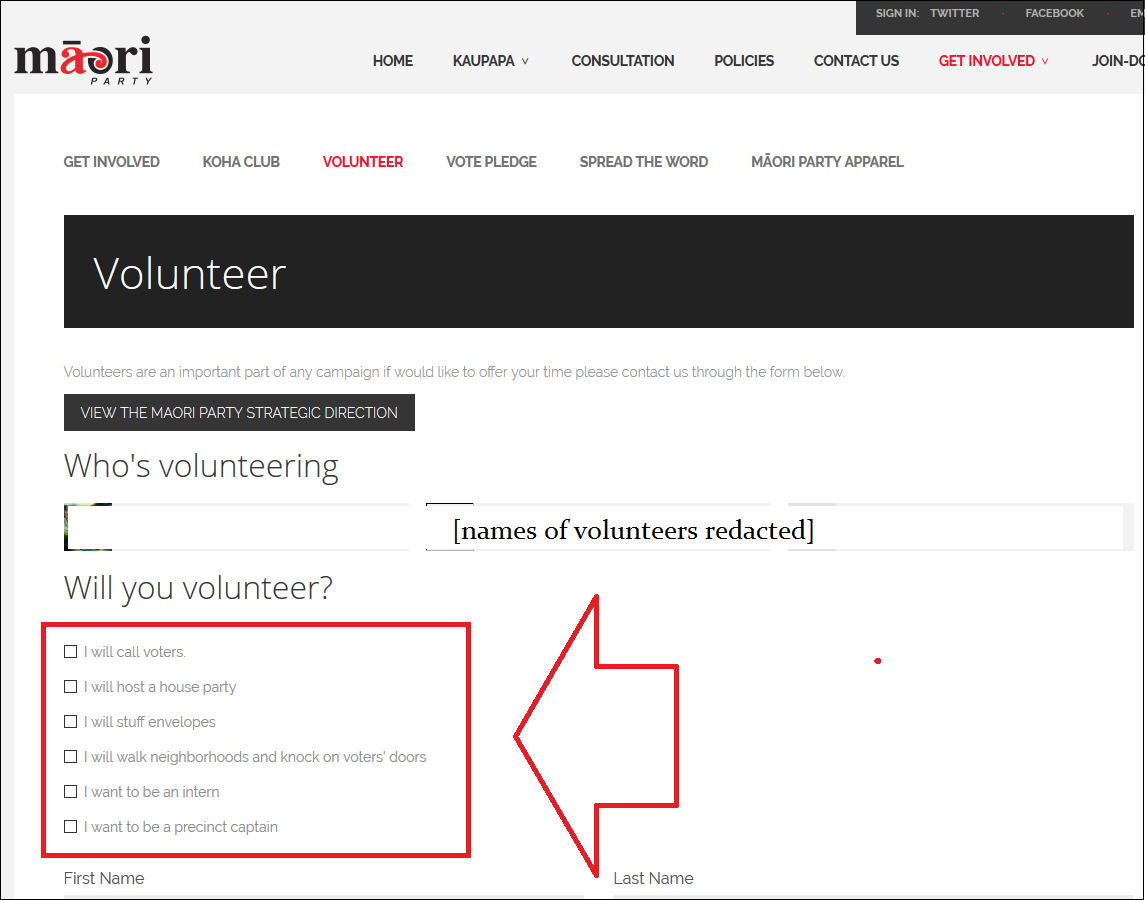 The ACT Party’s website is even more specific and wide-ranging in the expertise it demands from unpaid volunteers; 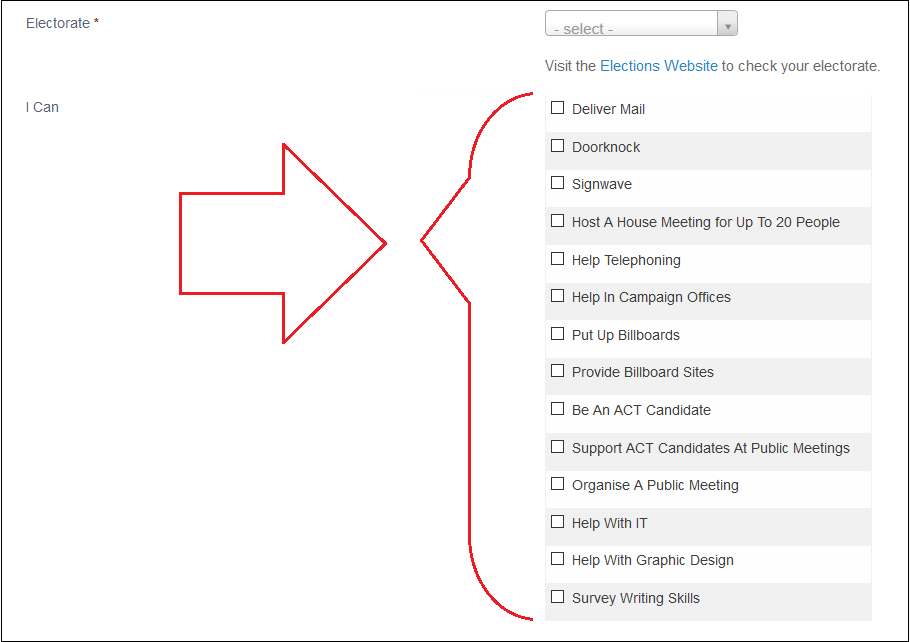 Considering the financial support ACT enjoys from its wealthy donors, it seems almost scrooge-like in it’s unwillingness to pay for services.

The American volunteers were described as “interns” by the media;

A group of 85 interns flew to New Zealand from around the world expecting lectures from Helen Clark and real world campaign experience.

They arrived to a cramped dormitory, no pay, no lectures, and a broken shower.

Aside from the one broken shower out of eight (which – according to some breathless media pundits – pushes New Zealand automatically into Third World status), complaints that interns were not paid appears contradictory.  Internship NZ suggests that interns are paid at aleast the minimum wage in New Zealand, to avoid exploitation;

However, when taken in conjunction with political volunteer work, the very definition of internship can involve paid or unpaid work;

Internships for professional careers are similar in some ways but not as rigorous as apprenticeships for professions, trade and vocational jobs, but the lack of standardisation and oversight leaves the term open to broad interpretation. Interns may be college or university students, high school students, or post-graduate adults. These positions may be paid or unpaid and are usually temporary.

Generally, an internship consists of an exchange of services for experience between the student and an organization. Students can also use an internship to determine if they have an interest in a particular career, to create a network of contacts, to acquire a recommendation letter to add to their curriculum vitae, or to gain school credit. Some interns find permanent, paid employment with the organizations for which they worked upon completion of the internship.

Unpaid work is not only recognised in New Zealand – Statistic NZ even counts it toward employment data;

Following  complaints from some interns, others came forward with  more positive experiences. And there was a revelation of what might have pricipitated  the complaint(s);

An American student taking part in a “fellowship” programme for the Labour Party campaign has defended it, saying most of the 85 interns on it are happy.

The student spoke on the condition of anonymity because most in the programme had signed non-disclosure agreements before starting on the programme.

She believed the complaints and leaks to the media were driven by one or two interns who had a beef with the programme. She claimed one was dropped from a leadership position on the programme after allegedly taking bottles of wine from Labour MP Jenny Salesa’s house after Salesa hosted a meal for them.

“We sat down, we ate and he walked away with two bottles of wine. The organisers called him out for it. Since then it’s been a simmering pot.”

She said it was disappointing to read comments in the media about “sweatshop” conditions and “slave labour”.

“Three meals a day, every single day, were provided. The care they have provided is comprehensive. The one thing that has cause a bit of chatter is the cubicle situation, which I understand is not ideal. But the sweatshop conditions, where we were rallied into a line and forced to work, that’s not true at all.”

She defended Awataha marae, saying most were moved into proper living quarters on the marae which are “more than ideal”.

“The food is great and they are very accommodating.”

Perhaps the most outrageously hypocritical response to this non-story came from the ACT Party. On 23 June, ACT tweeted; 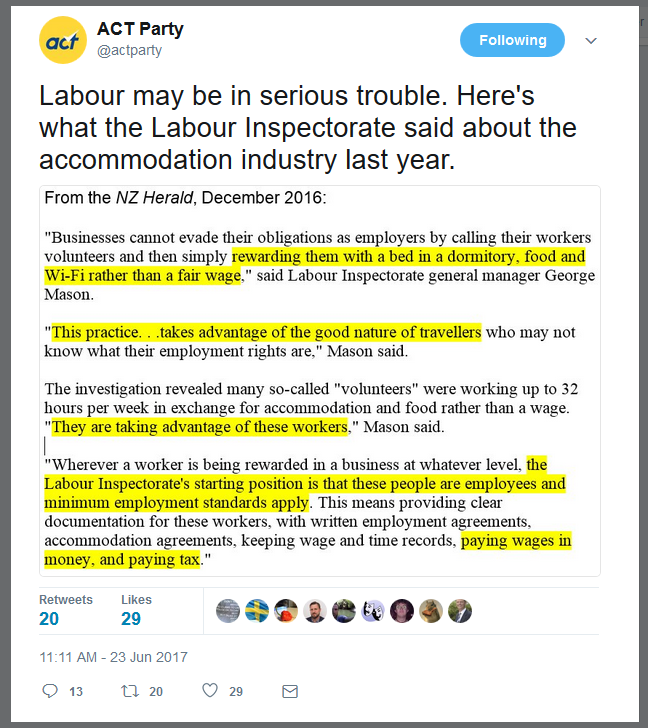 ACT is hardly known as a champion of workers’ rights.

ACT’s policy toward the minimum wage, for example, is anything but positive as former party-leader Jamie Whyte expressed three years ago;

“The economists in the National Party aren’t stupid, They know that this will have adverse effects for New Zealand workers and the economy. Yet they continue to intervene in wage rates, in an attempt to position themselves as moderates,” says Dr Whyte.

“In doing this, National perpetuates the myth that minimum wages protect the poor.

“John Key has skimmed over the inevitable consequences of this intervention, saying job losses will be ‘relatively negligible’. What Key doesn’t acknowledge is the unseen effects of minimum wages — those businesses which don’t directly lay off workers will be discouraged from employing more, or replacing those who leave voluntarily in future.

“The best thing that low skilled workers can do is get work experience. It’s hard to think of a more cruel policy than passing a law that bans the people most in need of work experience from getting any.

“Furthermore, many businesses will pass on their increasing employment costs to the consumer, contributing to the rising price of living which many New Zealanders have come to accept as normal.

“  Why, then, do the opponents of flexible labour markets in general, and this bill in particular, not see the futility in trying to legislate a different outcome in the labour market and the damage it is likely to do? Why, indeed, has the National Government compromised on the vulnerable worker clause and the requirement to conclude bargaining when these should be removed entirely?

I support this bill because it is a step in the right direction towards more flexible markets. Like all attempts to improve public policy, this amendment is imperfect. Economic reality and experience suggests it should have gone further.”

The only hypocrisy exposed in this non-story is the willingness of an amoral Right to seize an opportunity, to leap on an issue in a lame attempt to gain the moral highground.

A closer examination reveals a somewhat different  picture. Instead of skewering the Labour Party with a sloppily-written “exposé“, based on half-truths from a few disgruntled individuals, we are reminded that the ACT Party is no friend of the working class (or even the Middle Classes, who would suffer higher and more intrusive user-pays under a punitive ACT-style neo-liberal system).

Perhaps Laurie Fleming summed it up best on Twitter, when he posted this response to ACT’s faux tears about fabricated worker exploitation;

Yes indeed, ACT has exposed hypocrisy on this issue: it’s own.

* National Party webpages are saved and retained, as National regularly removes pages from its site.

Radio NZ:  Labour Party intern programme ‘got out of control’

The Spinoff:  All the untruths, evasions and, um, bullshit in the Todd Barclay debacle

The Jackal:  No comparison in substandard housing

The Standard:  Over egging the scandal soufflee

National-ACT supporters – not the brightest lights in the night sky, eh?

Today’s irony was brought to you courtesy of former ACT MP and Govt Minister, Rodney Hide 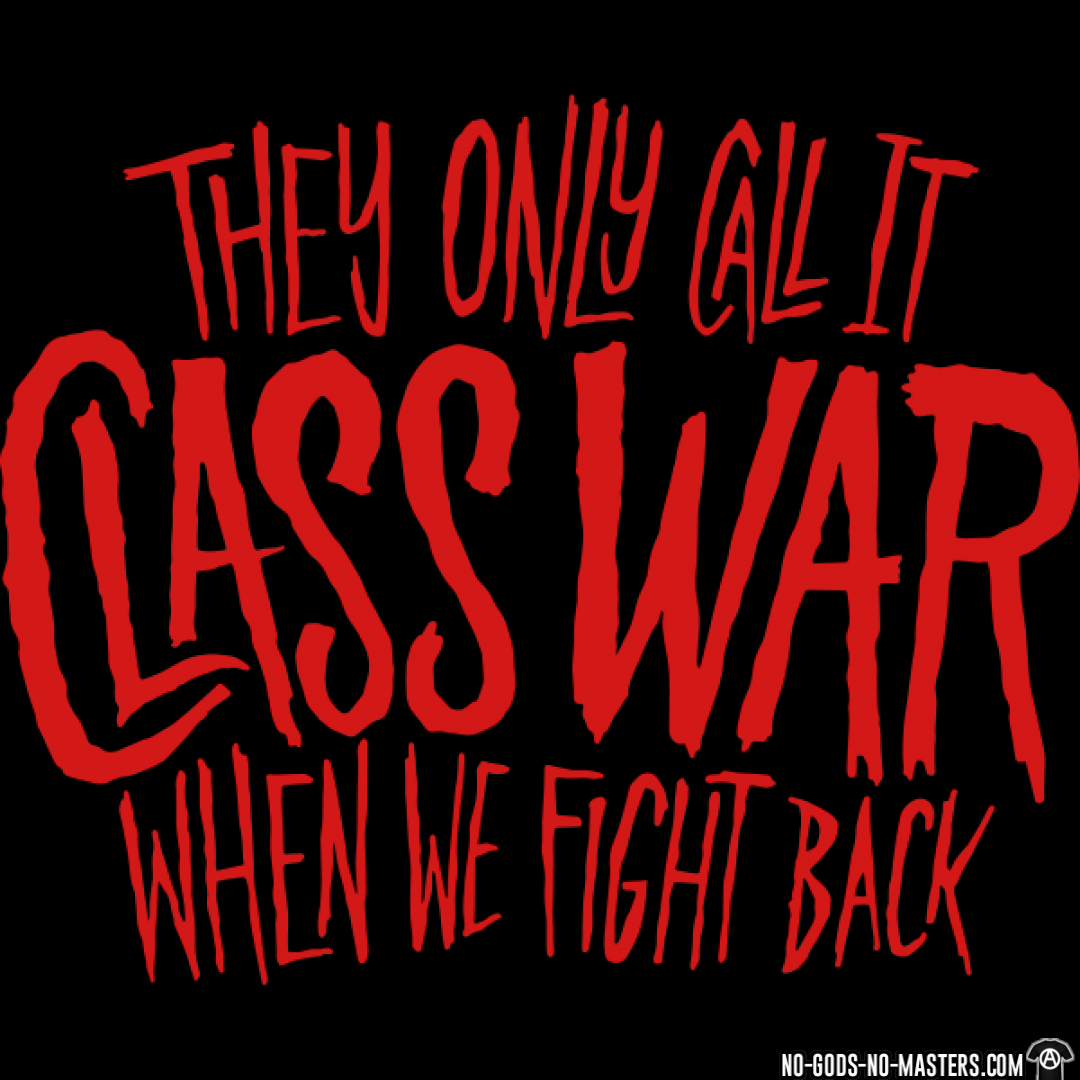