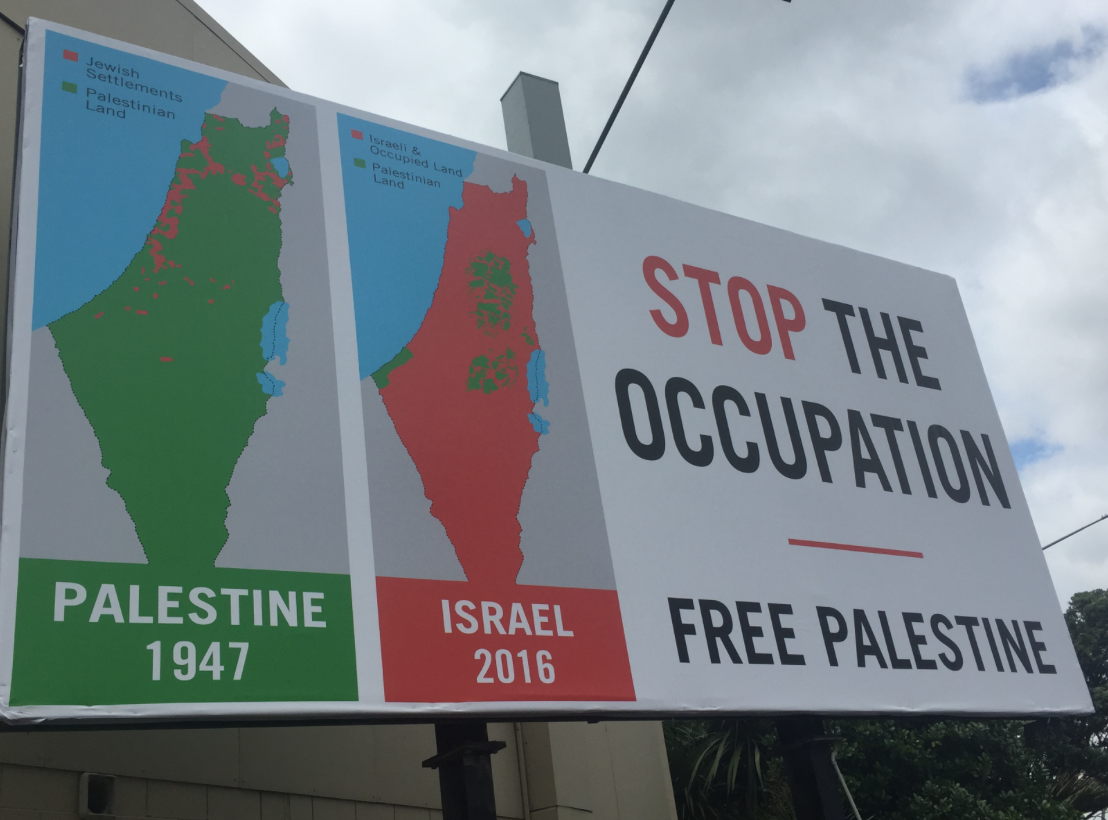 In 2016, the NZ Palestine Human Rights Campaign publicly set up a billboard that displayed two maps, one of British mandate Palestine in 1947 and another of Israel and the Israeli-Occupied Palestinian territories in 2016. The Advertising Standards Authority responded to four complaints about the display by finding that it was “unlikely to mislead.” However, on 22 June 2017, a writer for the Whale Oil website, SB, called the maps “misleading”, referred to them as a “map of lies” and suggested that they were “one of many distortions, anti-Semitic attacks and backlashes . . .”

The writer‘s comment concerning the billboard’s 1947 map actually confirmed its authenticity and correctness by noting that “At that time, the land was under British control as part of the Mandate of Palestine.” The land shown in the map is indeed Palestine and recognised as such internationally. The UN Partition plan allotted 55% of Palestine for the establishment of the Zionist state but the Zionists were not content with that and their developing project has taken evermore Palestinian land. The billboard’s 2016 map illustrates the expanded Zionist control over what is left of Palestine. Jewish author, Anna Baltzer, explains the truth about Israeli Occupation and what it’s like to live as a Palestinian in a video:Life in Occupied Palestine. Among other things, the video describes howpregnant Palestinian women, on their way to hospital, have been forced insteadto give birth at Israeli checkpoints, sometimes with fatal results. Over 80% of Israel’s annexation Wall does not even touch the Israeli border but extends far into West Bank Palestinian land.

The video shows the town of Qalqiliya completely surrounded, as are many other places in Palestine, by Israel’s Wall, which extends from the settlements to the very edge of Palestinian built-up areas. The surrounding farmland and open areas are taken for the settlements. Palestinian farmers are losing their livelihoods on land their families have held for generations. The Wall bars access to the religious centres of both Christians and Muslims. Also to be seen in the video is a Palestinian home completely surrounded by Israeli Army fences. Movement from and to the property is completely under the control of Israeli soldiers.

Israel’s imposition of illegal settlements outside its borders and brutal military control of the Palestinian people are war crimes. They are violations of international law that demand the urgent imposition of UN sanctions designed to bring Israel to account.