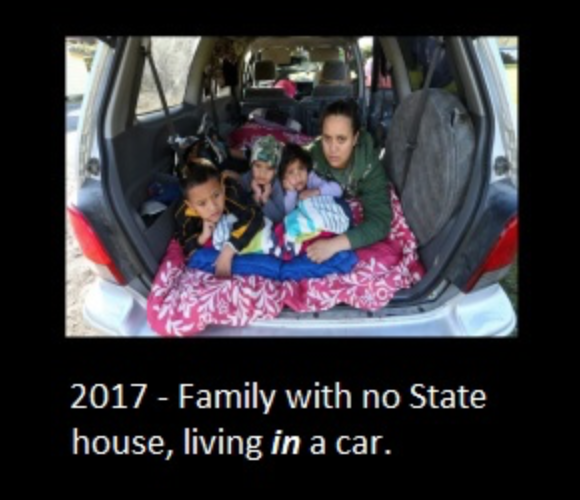 On 3 June, National announced with great fanfare that additional state housing would be made available in Tauranga  and  Papamoa;

Almost 220 new social and transitional places are on the way for Tauranga and Papamoa, the Government has today confirmed.

“Across the wider Bay of Plenty region, we will be providing a total of 146 transitional housing places meaning we’ll be able to help 584 families every year,” says Ms Adams.

“These houses are in addition to the 290 social houses we’re planning to secure in the Bay of Plenty. These new properties will be a welcome addition to the region, which is an area of growing need.”

“We are working hard alongside providers to address the demand on social housing and help those most in need of warm, safe housing.”

Which would be fine – except that in December last year, National signed an agreement to sell off 1,138 state houses to IHC subsidiary, Accessible Properties;

Accessible Properties has signed a contract with the Government confirming it will acquire and manage 1,140  [actually 1,138] state homes in Tauranga, and plans to add 150 more houses to its portfolio.

It was a similar deal to the one  the Salvation Army walked away from in March 2015;

The Government’s plan to sell off unwanted state houses to community housing providers has been dealt a massive blow with the Salvation Army walking away from the negotiation table.

The Salvation Army announced today it lacked the expertise, infrastructure and resources to deal with the number of houses and tenants that the Government wanted to offload.

“I don’t think there has been enough thinking gone into it.”

“ Last month the Government confirmed $1.2 billion of deferred maintenance on the state housing stock. Why would a provider want to purchase a liability? ”

“The properties have been assessed as being at a very good standard – we will maintain this and seek to make improvements.”

The sale of the properties took place at the same time that Tauranga was experiencing a housing crisis similar to Auckland’s;

National’s “grand plans” for 220 new social and transitional places remains woefully short of the 1,138 houses that National sold off to IHC’s Accessible Properties at the end of March.

It is also unclear what is meant by “ transitional places“. Are these actual houses? Or motel units, à la Auckland-style;

Only National would have the brazenness to sell off 1,138 state houses and then announce one-fifth of that number of “new houses” as some sort of “stunning achievement”.

Worse still is National’s over-all record when it comes to State housing;

No  wonder we have families living in cars in the second decade of the 21st Century.

Where did those state houses end up?

In September 2009, then-Housing Minister, Phil Heatley, announced that state house tenants would be allowed to purchase the state houses they were living in;

From today those state house tenants in a position to buy the house they live in can do so, says Housing Minister Phil Heatley.

Over the next week, Housing New Zealand will be approaching about 3,800 state tenants who pay market rent and live in a home that is available for purchase, to make them aware of the opportunity.

To ensure a property is not on-sold to developers, a tenant who purchases their state house will be unable to reapply for a state house for three years from the date of purchase.

Heatley specifically made clear his opposition to state houses ending up in the hands of anyone but occupying tenants.

In January 2015, our then-Dear Leader, Key, repeated National’s plans to sell state houses – but only to social service providers;

We’ll then look to sell between 1,000 and 2,000 Housing New Zealand properties over the following year for use as social housing run by approved community housing providers.

In doing so, we’ll use open and competitive processes.

Community housing providers may want to buy properties on their own, or they may go into partnership with other organisations who lend them money, contribute equity, or provide other services.

Properties will have to stay in social housing unless the government agrees otherwise, and existing tenants will continue to be housed for the duration of their need.

Selling properties in this way doesn’t reduce the number of social housing places. It just means more of the tenancies will be managed by a non-government housing provider rather than Housing New Zealand.

We’re very conscious that the sale of properties has to work for taxpayers.

We’re looking to get a fair and reasonable price for these properties, bearing in mind they’re being sold as ongoing social houses with high-need tenants.

We’re not selling them as private homes or rentals.

Note his unequivocal guarantee; “We’re not selling them as private homes or rentals”.

As with many of Key’s statements, he was somewhat ‘loose’ with truthfulness.

By May this year, it became very apparent where many of the 7,400 state houses sold off by National had ended up;

The article by Virginia Fallon makes this extraordinary revelation;

While the Devon St sale gives buyers the chance to choose their neighbours, it marks a bittersweet ending for Kay Hood, who once owned 80 per cent of the street.

“I would have liked to have bought the sixth one, that’s the only eyesore,” she said.

Over 20 years, Hood and husband Peter bought five houses on the street, and she wishes the last one never got away.

“We bought them off Housing Corp and I did approach them for the last one, but we never got it.”

” We bought them off Housing Corp…”?!

So while entire families are camping out in cars, garages, or  –  if they are lucky – motel rooms, private investors have ‘snapped up’ State House properties.

In this case, the Hoods on-sold their investments (ie, former state houses), and were candid in their plans;

“ We’re going to go skiing and spend the children’s inheritance. ”

Personally, I hold no antipathy toward the Hoods. In our current social climate of  hyper-individualism  combined with a degree of moral ambiguity, many of our fellow New Zealanders have exploited opportunities for speculation such as this.

But I do hold 100% responsible John Key and his fellow Ministers-of-the-Crown who allowed this travesty to occur.

More so John Key, who benefitted from a state house in his youth;

The over-powering stench I can smell is either a dead, rotting whale on my front lawn – or Key’s appalling hypocrisy.

The sound of a train-wreck hurtling toward you

It is abundantly clear that National is panicking over the issue of housing.

Whether it is homelessness or over-crowding by poor families, or home unaffordability for middle-class Millenials, National has managed to spectacularly cock this up.

New Zealanders may be able to tolerate poverty. This country has had varying degrees of poverty since the Year Dot.

But the notion of homelessness is more than they can stomach. Homelessness strikes at the very core of the “Kiwi Dream”, where a roof over your head and a place to raise a family is one of our strongest values. (The other being the now-mythical notion of egalitarianism. That social ideal had the life throttled out of it after 1984.)

Housing-related problems (I refuse to call them “issues”) for National keep mounting in a Trump-like way.

On 8 June, on Radio NZ, Major Campbell Roberts (the same Maj. Roberts who, in 2015, had thoroughly rejected National’s invitation to buy properties from Housing NZ)  from the Salvation Army’s social policy unit, had been invited by then Finance Minister English to become part of National’s Housing Shareholders Advisory Group.

Maj. Roberts revealed that now-Dear Leader, Bill English, had described a looming housing crisis as far back as 2010;

“ He [Mr English] said a couple of things; one, the use of of the $15 billion asset of Housing New Zealand, and the second was that he was seeing a major crisis in Auckland in housing in five or six years.  It was a passing comment – but it was one of the reasons for setting up the shareholders group.”

“ The Prime Minister was having a number of such conversations on housing reform at the time, including with a housing advisory group which included the Salvation Army, and he doesn’t recall exactly what he said.”

Who else had memory problems when it came to potentially embarrassing gaffs and scandals?

Meanwhile, in a latest move to dampen the ballooning housing market, the Reserve Bank is contemplating adding a new “tool” to it’s regulatory powers. The RBNZ wants to cap  debt-to-value ratios at five times a borrower’s income;

The Reserve Bank wants to be able to stop people taking out mortgages that are too big compared to their incomes.

It wants debt-to-income restrictions (DTIs), which limit the amount that people can borrow to a multiple of their income, added to its macroprudential toolkit, alongside loan-to-value (LVR) restrictions.

The restrictions are used in other markets around the world, such as Britain, where borrowers must have a loan no bigger than 4.5 times their income. The Reserve Bank is suggesting a limit of five times.

The size of New Zealand mortgages compared to incomes has increased sharply over the past 30 years. The Reserve Bank said increases since 2014 partly reflected the drop in interest rates over that time, but it was possible that rates could rise again in future.

The RBNZ estimates debt-to-income restrictions could prevent 8,800 investors from buying a property. But 1,600 First Home buyers  would also be caught up in stringent DTI restrictions and locked out of  owning their home.

The Bank’s chief agenda is to prevent a massive housing crash that would impact on the economy; cause mass unemployment; and result in thousands losing their homes through mortgage defaulting;

The housing market could collapse if mortgage rates rise to 7 percent, given the increasing numbers of households heavily in debt, the Reserve Bank says.

The Reserve Bank stress-tested the ability of borrowers to cope with mortgage rates at 7 percent, which is close to the average two-year mortgage rate over the past decade.

It found 4 percent of all borrowers, and 5 percent of recent ones, would be put under severe stress where they could not meet day-to-day bills for food and power.

“So that if a downturn comes, you don’t get a whole lot of forced sales coming onto the market that depresses house prices even further, and create a risk for the banking system and also the broader economy.”

All because National ignored a crisis that Bill English predicted seven years ago, and could have dampened with a capital gains tax equivalent to company tax, and stopping investors from claiming tax deductions on mortgage interest payments.

It is bizarre and inequitable that tax-payers are in effect subsidising investor/speculators on their investments. Especially when, after two years, those properties can be on-sold with little or no capital gains tax paid.

If the RBNZ introduces a debt-to-income ratio of five times a person’s income, it may well succeed in dampening down the property bubble.

But as usual, it will be those at the bottom (or near the bottom) who pay the price. They will be the ones who continue to be locked out of the property market and denied a chance to enjoy the Kiwi Dream of home ownership.

The resentment and anger this will cause cannot be over-stated.

The sound in Bill English’s ear is the roar of a train wreck bearing down on him and his hopeless, self-serving ‘government’. ETA for the crash: 23 September.

All because National stubbornly refused to act to curb property speculation.

Accessible Properties:  What is happening?

Sunlive: Housing crisis under the spotlight

Fairfax media:  Can’t afford your own island? How about buying your very own street?

NewstalkZB: Demand for food banks, emergency housing much higher than before recession