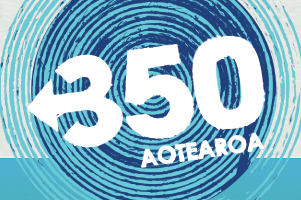 350 Aotearoa is calling Trump’s decision to pull out of the Paris climate agreement “a crime against our global future”, and is urging New Zealanders to come out in big numbers to protest against US Secretary of State, Rex Tillerson’s, visit to Wellington next week.

“Trump is out of step with the rest of the world, and we need to make sure he feels that when his Secretary of State lands in Wellington on Tuesday. People and governments around the world are backing the US into a corner where they the lonely outlier. Bill English must denounce this move to show whose side we’re on” said Niamh O’Flynn, Executive Director of 350 Aotearoa.

“At least now we can move forward without any false hopes that the Trump administration is going to do anything to responsibly address its part on climate change. The shift to renewable energy is happening, and it’s happening with or without Trump.”
“2016 was the hottest year ever, and a huge wakeup call. But 2017 is a fire alarm. We have to remember what is at stake here – it’s people’s lives and livelihoods”
On Tuesday next week US Secretary of State, Rex Tillerson, will be visiting Wellington to meet with Gerry Brownlee to discuss “some of the world’s most pressing issues”. Before his appointment as Secretary of State, Tillerson was the CEO of ExxonMobil.

“ExxonMobil is the company that despite knowing the truth about climate change since the 1960s waged a war of misinformation and denial that robbed humanity of a generation’s worth of time to reverse climate change. We must stand up against climate denial and war-mongering, and oppose his visit to Aotearoa.”

“ We need to protect our government from the influence of dirty oil and climate denial. We are mobilising on Tuesday to send a message to Tillerson, Trump and Bill English that climate denialism is not acceptable under our watch.”

The rally against Tillerson’s visit will be held on Tuesday at Parliament. People can sign up to receive rally updates here: http://act.350.org/signup/rex-tillerson-nz/