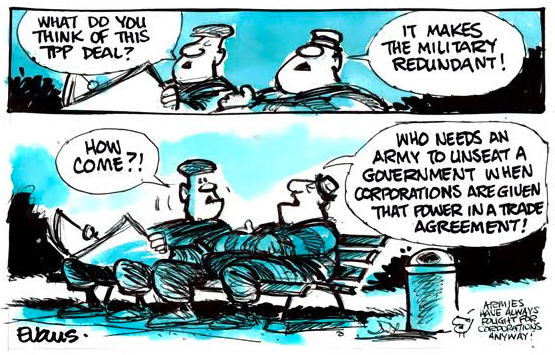 It’s like a scene from a Dracula movie where the zombie comes back from the dead. The TPPA is dead but the TPPA-11, without the US, has just opened one eye.

The idea of reviving the TPPA without the US, but still including all of the dangerous aspects that the US introduced into negotiations, makes no sense.

It makes no sense economically. Todd McClay has asked his officials to assess the economics of the TPPA without the US. This time they should not use the speculative modelling developed by a right wing institute to justify deregulation and instead of just looking at the benefits, like they did last time. At minimum, they should look at the costs as well.

Even so, the government’s analysis showed that the benefits are tiny. If the speculative assumptions are stripped away, the benefits would be around 0.1-0.2% of GDP by 2030. That’s virtually irrelevant.

It also makes little sense to most of the other countries that signed the TPPA. Most of them are calling for re-negotiation of the extreme rules that were put into the TPPA by the US corporates. Some of them, like Vietnam, were in the TPPA primarily because of the access to the US market, limited though it was.

Todd McClay is trying to sound like Trump in saying that the 11 countries are “very, very united”, but just sounds desperate.

The core countries that are talking about a revived TPPA without making big changes are Japan, Australia and New Zealand, and perhaps a few smaller Asian countries like Singapore and Brunei. Canada and others want to renegotiate key terms.  There is also doubt about Australia because the TPPA was rejected by the Australian senate, and any new TPPA clone even less likely to be passed.  The TPPA-11 looks more like a TPPA-4.

Japan is justifying it’s enthusiasm for the TPPA by saying that it is a champion for free trade to fight the spectre of protectionism. But Japan’s reasons for wanting a trade deal are also political. They want to future US government to come into a TPPA as a way to strengthen their strategic engagement in Asia. It’s about China and North Korea.

The revival is also being driven by Bill English and Todd McClay, desperate for a deal, any deal, to give the impression they are helping exporters. It is the trophy they want to display before the election, especially since National is abjectly failing the goal they set themselves to increase our exports to 40% of GDP.

It is also about trying to lock in their trade liberalisation agenda before they get voted out of office on 23rd September.

The stage is set. The TPPA will become an election issue. Bring it on. The Green Party has repeatedly rejected the TPPA and we continue to do so. In government, we will push for a fundamental change in our approach to trade agreements to re-balance trade agreements in three ways.

We will oppose the excessive rights for global corporations and work to institute stronger controls on foreign investment, requiring them to pay tax and strengthening support for small business and social enterprise. This would include rejecting the rights of multinationals to sue our government in an international tribunal – the controversial Investor-State Dispute Settlement (ISDS) provisions.

We will stop deregulation that enables exploitation of workers and the environment, we’ll properly regulate foreign investors and business, and uphold human rights, te Tiriti and environmental protection.

We will move away from National’s destructive resource extraction and pollution, strengthen local economies, and transition rapidly towards a low emissions future. We will support value-add processing of our commodities, re-building our clean green brand and investment in education and training for opportunities of the future.

Even the wildest scenarios for a TPPA-clone won’t happen before the election. We will have a chance this year to put a stake in the heart of the TPPA and its clones, and make a fundamental change towards fair and sustainable trade.