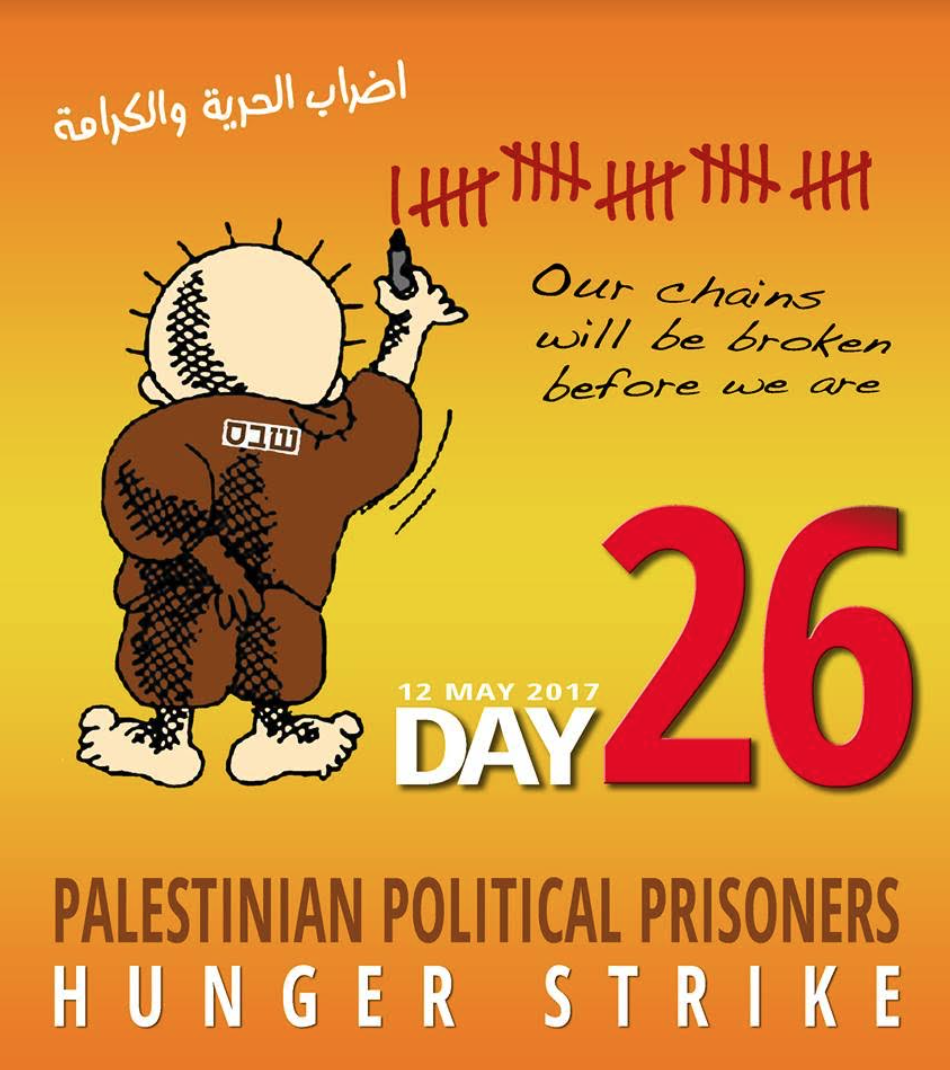 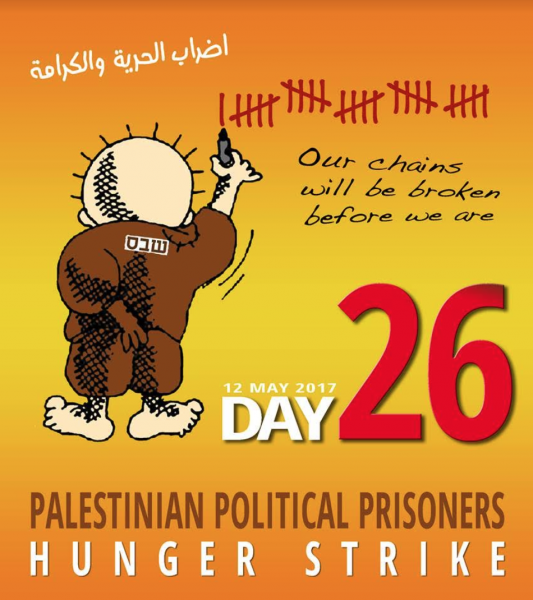 SHUSH! DON’T TELL ANYBODY!  Could this be the motto of New Zealand mainsteam media, as regards world news that is in any way critical of Israel?

Or,  could it be that an  ongoing hunger strike , well over 20 days now, of some 1500 to 1600 Palestinians is too trivial an issue, too local, to receive any attention ?

Does our media assume  that no one outside of Palestine gives a damn? After all, Israel is far away.

Israeli media reports that Israelis themselves aren’t the least bit interested in hearing about the prisoners, who they are, what they go through, why they are on hunger strike,  or what a hunger strike does to the body.  Israeli journalist Gideon Levy reports that some Israelis are happy about the hunger strikes and hope the strikers will all die. Levy himself, as he has written in Haaretz, is horrified by the depths the regime has sunk to, “Evil is the only inclination guiding the Israeli response to the hunger strike of the Palestinian prisoners. All the rest is pretense about security and hollow political excuses intended only to cloak the evil.”

Yet  demonstrations of support for the prisoners  have been, and are being, held  in  many cities around the world: USA, Canada, France, Italy, Turkey, Germany, Sweden, Greece, Ireland, South Africa, Australia, Tunisia, Jordan and, yes, even in Auckland NZ.

Our media bosses could argue that some of the demonstrations were small. ( I assume they varied in size, drinking a glass of water with a small amount of salt, as a show of solidarity, is not everyone’s cup of tea!)  Our media could claim that it only reports international news of immense significance, like umm, like whatever the royal family is up to.

However, global outrage is intensifying. Norway’s biggest and most influential trade union, LO,  has just  approved a boycott of Israel.  (source mondoweiss.net/2017/05)  From mondoweiss, ” LO joins some of the world’s most important trade union federations, including South Africa’s COSATU, Brazil’s CUT, Quebec’s CSN and the Irish ICTU, in calling for meaningful Boycott, Divest, Sanctions pressure on the corporations and institutions that have enabled decades of Israeli occupation, settler-colonialism and apartheid.”

Over 200 American and international lawyers, legal workers and legal organisations, have signed a Letter of Support for Palestinian Hunger Strikers. The letter is worth reading as it addresses  issues of the Israeli legal system that impact negatively on Palestinians, including: the reality of a dual legal system in the West Bank ie military courts for Palestinians and civil courts for settlers, the arrests and degrading treatment, even torture, of children, the systematic use of   administrative detention, ie  imprisonment  without charge or trial for renewable periods of up to six months,  and the use of  long-term solitary confinement, widely understood to be a form of cruel, inhuman or degrading treatment that may amount to torture. The letter is found here.

The letter finishes with a long list of the signatories, individuals and organisations including National Lawyers Guild, International Association of Democratic Lawyers and the Center for Constitutional Rights.

Surely there is a story here for NZ print and radio media to get their teeth into.

Yet there is more.

It certainly seems that political leaders everywhere, including here, assume that showing interest in the Palestinian cause, is political suicide.

Not quite everywhere. In South Africa there is strong support, even at government level,  for the Palestinian prisoners and their leader Marwan Barghouti (Palestine’s Nelson Mandela). A 24-hour fast, drinking salt and water, was scheduled to begin Sunday evening 14 May with Deputy President Cyril Ramaphosa and several Government Ministers and Deputy Ministers taking part. Other well known personalities pledged to participate, including several elderly ex-Robben Island prisoners. Amnesty International and Jewish Voices for  Just Peace endorsed the campaign.

In parts of Europe too, politicians are taking a stand. On 11 May, the  Portuguese Parliament  approved a text of solidarity with the  Palestinian political prisoners on hunger strike.

As international support for Palestinian prisoners grows, so does the cruelty of the Israeli regime. Leaders are put in isolation, salt is confiscated. Some IDF soldiers held a barbecue outside a prison hoping that the smell of meat would reach the prisoners. There are fears that Israel will import Indian doctors to force-feed prisoners. The IDF created a fake video which amused the Israeli public. It is supposedly of Barghouti eating a cookie in his toilet cubicle.  Pizza Hut Israel even posted an ad offering Barghouti a pizza.

The strongest support for Palestinians  comes from South Africa and from Ireland, because of  memories of colonisation and of Bobby Sands. Remember Bobby Sands?

What about here in New Zealand?  Pressure needs to be put on Israel for real change. But for that, we need an informed public.

Gideon Levy is spot on, saying that the treatment of Palestinian prisoners is evil. I respect Levy’s outrage. I wish our NZ media would show some outrage too. Martin Luther King said, “To ignore evil is to become an accomplice to it.”

The public deserves  media that doesn’t say to itself,  SHUSH! DON’T TELL!

Lois Griffiths is a Palestinian and Human Rights Activist