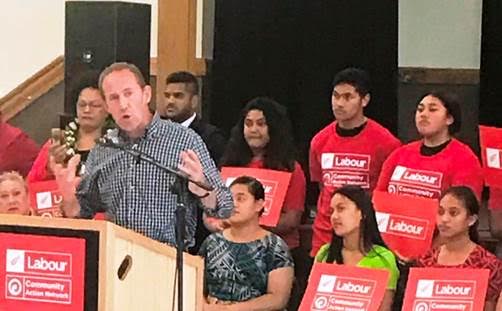 LABOUR ACTIVISTS bang on and on about “community”. It’s a nice safe word that allows them to express ideas that are vaguely collective in nature, but without resorting to that awful, unspeakable word – class. That said, it is difficult to drive into an ageing state-house suburb like Otara, in Auckland, without the word “community” popping into your head.

Maybe that’s why Labour, in attempting to maximise its vote in the South Auckland electorates, has come up with the “Community Action Network” (CAN). In a nutshell, the party is attempting to sign up as many volunteers as possible to make sure that the voters of Manukau East, Mangere, Manurewa and Tamaki Makaurau: a) Enrol; b) Receive Labour’s Message; and c) Vote.

This is a very big deal for the Labour Party because, in the general election of 2005, the voters of South Auckland came through for Labour in a very big way. For most of election night, National’s thin blue line had been edging just ahead of Labour’s on the TVNZ graph. But then, almost literally at the eleventh hour, the massive polling booths of South Auckland finished their count and Labour’s red line edged ahead of National’s.

Thus were Don Brash’s plans to scrap the Treaty of Waitangi and get rid of the Maori seats thwarted. Those South Auckland voters – Maori and Pacifica for the most part – are the people we have to thank for New Zealand avoiding what would, almost certainly, have been a rapid descent into massive civil and racial strife.

So, South Auckland matters – a lot. Which is why, on Saturday, I took myself down the Southern Motorway, to the Otara Mormon Church on Ferguson Road, for the launch of CAN. I wanted to get a feel for whether this was a viable election project or just wishful thinking. Is Labour still able to make an appeal that resonates with Maori and Pacifica voters – or not?

It should be easy. In Su’a William Sio, Jenny Salesa, Louisa Wall and Peeni Henare, Labour has a group of MPs who look and sound very much like the people they’ve been elected to represent. Moreover, their constituents give the impression of both liking and respecting them. If people need help, these MPs are there, no matter what the day or the hour. That’s why they keep getting elected with ridiculously large majorities.

But Labour? Well, that’s slightly different. The loyalty to Labour that still exists among the voters of South Auckland appears, to me at least, to be more residual than active. The Labour Party they celebrate is the Labour Party of their hearts. A party that stands for all the values they hold dear: a political symbol – not a real political force.

I guess that’s why the appeals of Jacinda Ardern and Andrew Little were received with warm, rather than fervent, applause. In essence, both Deputy and Leader told their audience (of about 300) that Labour can’t make it into government without them: without South Auckland voting like it’s 2005. And, yes, by way of inducement, they ran through all the usual things that Labour likes to think of itself as standing for: health, education, housing, jobs; but not in a way that even remotely suggested that they knew what the lack of these things means, in terms of brutal everyday realities, to the people seated in front of them.

To get these people out in the numbers Labour is hoping for, they’ll need more than Andrew Little’s war stories from his days as a student politician. As one trade unionists quipped: “It might have been better if he’d told a story or two from his days on the picket line.” To which, I could not forbear from responding: “Has he got any?”

Nor could I forget, as I headed back to my Three Kings bungalow, the power of the singing led-off by Su’a William Sio to end the day’s proceedings. Intricate female harmonies were laid over the full-throated basso profundo of the men – the whole hymn rising and falling as effortlessly as breathing in and out. Unshakeable values, widely shared: the words known by everyone; believed by everyone; sung by everyone.

That is the music a real community gives voice to – and Labour’s leaders know neither the words, nor the tune.