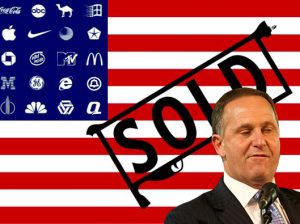 Just let it die. Let the TPPA die. Not a dignified death, because it doesn’t deserve that. But at least let the corpse be buried in some deep hole, wrapped in the American flag, without the threat of being disinterred and shrouded in some surrogate garb.

Of course, Team TPPA isn’t about to let that happen. Their latest scheme is to bring the zombie agreement back to life, rebranded as the ‘TPP-5’. Only three of the five reported participants have been clearly identified. You guessed it – New Zealand, Australia and Japan. The other possibilities being mentioned are Singapore and Brunei Darussalam. Aside from Japan, this is hardly the big league.

That seems to be the main outcome from this week’s two-day meeting of chief negotiators from the TPPA-11 (12 minus the US) in Toronto. The officials were tasked at the previous trade ministers’ meeting in Chile in March with devising a rescue plan for them to consider when they meet on the margins of APEC in Hanoi from 20-21 May.

The Toronto meeting was shrouded in secrecy, yet again. Even the Canadian media couldn’t find out the venue. There is no possible excuse to continue this obsession, except to avoid public scrutiny and political accountability. Their claim that they couldn’t openly negotiate the TPPA because it required sensitive trade-offs no longer applies. They are simple trying to work out how to rescue the political capital and public funds they have invested over seven years of TPPA negotiations.

Reports of the meeting are confused and confusing, but it seems to have ended without any agreement. The most consistent story, emanating from Japan, suggest a majority of the TPPA-11 have reached the only tenable conclusion – there is no benefit to them from resurrecting a deal that was designed for and in effect by the US.

Some ASEAN countries seem wary that proceeding with the TPPA for the sake of it would send an unwelcome message to China, and restrict their new-found flexibility in the parallel negotiations for the Regional Comprehensive Economic Partnership (RCEP) currently taking place in Manila. Vietnam has no interest in decimating its access to affordable medicines and smashing its SOEs, as the TPPA required, without access to the US garment market. Chile and Peru are not interested either. Canada and Mexico are preoccupied with the pending renegotiation of the North American Free Trade Agreement (NAFTA).

That leaves New Zealand, Australia and Japan. According to Japanese media, the gang of three, which they hope to expand to five, plans to go ahead with the existing text. They would have to strip out the US’s annexes and schedules and bilateral side letters, draft new provisions for entry into force, and probably give it a different name. But they would keep the toxic elements on pharmaceuticals, investment, state-owned enterprises, among other policy issues, which they agreed to only reluctantly because the US said they were non-negotiable red lines.

There can be no pretence of a compelling economic rationale for a TPPA-5 when the projected costs are weighed against the benefits. That is especially so for New Zealand. Their main rationale – securing a free trade agreement with the US through the only possible path of a multi-country negotiations – has been stripped away. The downsides of the deal are as toxic as they always were, with no prospect they will be justified by substantive economic gains in return.

For New Zealand and Australia, keeping the TPPA alive is purely ideological so they can keep the ‘wobbly bicycle’ of liberalisation agreements moving forward. Japan’s motives are more complex, as the original agreement was an instrument to force internal restructuring, a counter-force to China and a way of building the Japan US relationship by adopting US corporate rules.

There are two weeks to the Hanoi meeting – two weeks in which to send an unequivocal message to Trade Minister Todd McClay that there is no democratic mandate to commit New Zealand to a TPPA-5 or any other rescue remedy. The National government got the implementing legislation through Parliament on a single vote, against the background of unprecedented protests and a massive number of submissions opposing the original TPPA. It was rejected by the major opposition parties, including Labour.

New Zealand is heading into a general election. National may not be the government in a few months’ time. McClay needs to confess what he and National are up to, what he has been advised, and what he plans to do in two weeks’ time in Hanoi.

The opposition parties then need to get off the fence. They can no longer pretend that the TPPA is off the electoral agenda. If they don’t nip in the bud the TPPA-5 or any other hair-brained scheme now, they could inherit a mess to which the only ethical response is to do a Trump and withdraw New Zealand from the process or the outcome. Heaven forbid that we would invoke that precedent!

So, it’s time to stop this nonsense now, for the party faithful to get Labour, the Greens, New Zealand First, Maori Party and Mana to make enough noise to make McClay back off, and for the voters to make it clear to all the political parties that support for a zombie TPPA is a vote breaker for them.