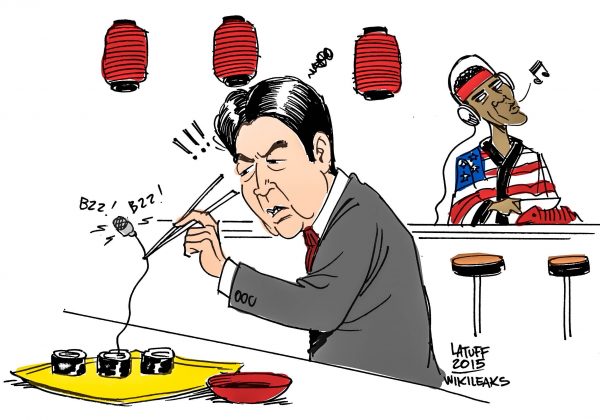 New Zealand’s reputation in Japan has been damaged by revelations that our GCSB has been spying on its government communications. “New Zealand spied on Japan to help US at 2007 whaling confab” read the 26 April headline in the Japan Times.

The evidence for this spying came from NSA documents in the Snowden papers, published by The Intercept. They disclose that every morning during a 2007 whaling conference (held in Alaska) the GCSB would provide a paper on Japan’s pro-whaling lobbying efforts. Information for this briefing had been gathered by intercepting communications between Japanese officials.

“New Zealand had the target access, and collected and provided insightful SIGINT that laid out the lobbying efforts of the Japanese and the response of countries whose votes were so coveted,” report an NSA document.

According to the NSA, the American, Australian and New Zealand delegates came together each morning to read the material. “We knew the delegates valued the material simply because they took time from their very hectic schedules to be there and read it.”

In the short term the spying might have helped the anti-whaling cause, but in the longer term it was disastrous.

Firstly, most of the Five Eyes spying on Japanese diplomats would have been for more reactionary purposes. America has been pushing for Japan to be more engaged in its military adventures in the Middle East.

Secondly, the ends do not justify the means. Spying on the diplomatic communications of a friendly government is a gross invasion of privacy, and contrary to the Vienna protocols which govern diplomatic relations.

Thirdly, this new evidence of GCSB spying has naturally angered ordinary Japanese people. It is an attack on their democracy. It will make Japanese people more critical of New Zealand both for spying on them and for acting as a spy for America.

Unfortunately, this GCSB spying on Japan is not new. When he wrote his 1996 book, Secret Power, Nicky Hager was surprised that so much of the GCSB’s then resources were devoted to Japan. Not only was the Waihopai spy base used to monitor Japan’s international communications. The GCSB also had a role within the Five Eyes, to process Japanese material coming from the other Five Eyes partners.

For many years our tax dollars have been misused to spy on Japan’s diplomatic communications. It is abhorrent and not in our best interests. It is another reason why we should withdraw from the Five Eyes network.