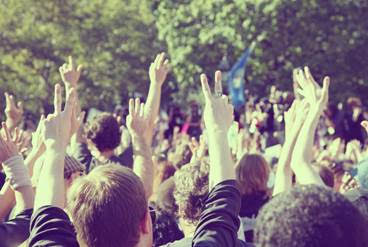 I’M A BIG FAN of Rachel Stewart’s writing. Her column in the NZ Herald has quickly become one of those “must-read” contributions to the national conversation. She’s to be admired for her courage, too. Anyone who takes on Big Dairy in this country knows exactly what to expect – and it usually arrives. This weeks contribution,  however, on the subject of democracy, was not one of her best.

Even when undertaken with the best of intentions (as I’m sure this particular column was) dissing democracy is never, ever, a good idea. It stands among the most extraordinary – and fragile – of human achievements. Its cost, in terms of human suffering, has been huge, and most of its victories have been tragically temporary. The historical default setting for state conduct is authoritarian (descending all-too-frequently into brutal tyranny). When it comes to political systems, democracies remain the precious exception – not the rule.

Which is not to say that the practice of democracy is always entirely edifying. It was the German Chancellor, Otto von Bismarck, who quipped that: “Laws are like sausages – it is best not to see them being made.”

A sentiment with which Rachel clearly has some sympathy.

“If society feels less moral reverence to the democracy ideal, who can honestly blame them? Having listened to Clinton and Trump battle it out for a year before the unthinkable became real, I get it.”

Obviously, last year’s US presidential election still rankles. But it is always a mistake to confuse outcome with process. Rachel may have been disappointed that Bernie Sanders lost to Hillary Clinton, but to suggest that the Democratic Party “fiddled with the dials and switches to ensure Bernie Sanders never got the nod” is just plain wrong. Bernie lost because he got fewer votes than Hillary – pure and simple. He made the cardinal error of not competing hard and early in the American South – the very same mistake that cost Hillary the nomination back in 2008.

Rachel is also scornful of the US Electoral College’s contribution to democracy: “Then there’s Trump. Astonishingly elected, but by fewer than three million votes than his rival. Only in America. Land of the seriously deficient electoral system.”

Except, of course, the whole point of the Electoral College is to ensure that the rights of the smaller American states are not completely obliterated by the superior numbers of the larger ones. The United States is, after all, a federation. What benefit would the citizens of Wyoming or Rhode Island derive from belonging to the Union if they were forever being outvoted by the citizens of California, New York and Texas? If Hillary had spent less time in those three states and more time in Wisconsin, Michigan and Pennsylvania she would now be the second President Clinton.

More worrying still, is Rachel’s evident lack of understanding of her own country’s democratic system.

“Here at home we find we’re stuck with the lack-lustre Mr English as Prime Minister, and not of our choosing. He was the pre-ordained prefect left to us by Key when he exited stage right. Yeah, the Nats held an internal mock election but, that’s all it was. The appearance of democracy when you’re not really having it.”

Umm, no, the Nats didn’t. Caucus elections frequently fail to come to an actual vote, for the very simple (and obvious) reason that if there’s one thing democratic politicians know how to do really, really well – it’s count. When a candidate realises that he or she doesn’t have the numbers to win, they simply withdraw from the race. Why stand if you’re certain to lose? There’s always next time!

And besides, under our Westminster System of parliamentary democracy, voters NEVER get to elect the Prime Minister. That job goes to the Member of Parliament who convinces the Governor-General that he or she commands a majority of the House of Representatives – the politicians we DO get to elect.

Political parties make this job a great deal easier and ensure that the person who emerges as Prime Minister gets to remain in office for a sensible period of time. That’s why we have them. And if they often seem rather cautious and overly influenced by special interests, then there’s a very simple way to remedy that deficiency – become a member and turn them into something worth voting for!

Danyl Mclauchlan makes the case for practical, get-down-and-dirty politics much better than I ever could in his excellent review of Max Harris’s “The New Zealand Project”:

“Politics is technocratic because modern societies are complex: many things could be better, but almost everything could be much, much worse, and all the high-minded values in the world are worthless if you can’t keep the lights on. It is compromised because pluralism – the challenge of different groups in society holding different and conflicting but reasonable and valid views – is the central problem in politics, and cannot be fixed by re-educating everyone. Political reform should be cautious, because outcomes are uncertain and overconfidence bias is real, especially among groups of intelligent experts who reinforce each other’s assumptions – a dynamic that often leads to catastrophic failure despite the best of intentions.”

So, Rachel. Is democracy having a rough time at the moment? Yes, it is. But that only reinforces the need to get stuck in and organise it back into robust good health. Do money and backroom wheeling and dealing sully the search for “pro bono publico” – the public good? Of course they do – but not to anything like the extent you might expect. And even when they do get out of hand, and the plutocrats start menacing the democrats: a corrupt democracy is always – always – better than a virtuous tyranny. (As Carrie Mathison discovers in the final episode of the sixth series of “Homeland”.)

Because, to quote the pithy summation of that old rogue Winston Churchill: “Democracy is the worst form of government, except for all the others.”