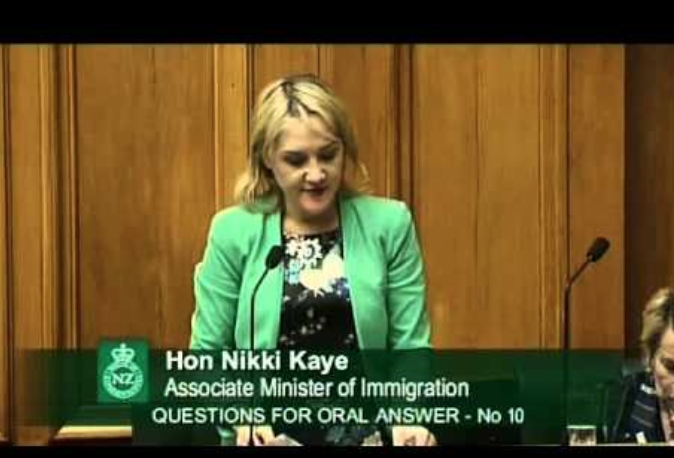 Both Ms Adams and Ms Kaye have conveyed a public perception of calm efficiency, without the PR cluster-f***s that have come to characterise Nick Smith and Hekia Parata’s erratic performances in their respective ministerial  portfolios.

Smith’s accident-prone political career reached it’s nadir in March 2012 when he was forced to resign for mis-using his ministerial influence on behalf of a close friend and National Party apparatchik, Bronwyn Pullar.

Hekia Parata’s controversy-riddled career crashed in June 2012 when her proposal to increase class-room sizes was met with a deafening chorus of outrage from middle-class mums and dads. The backlash from voters was such that Parata was forced to back down in a humiliating policy u-turn.

English’s re-shuffle puts new(-ish) faces into his Cabinet giving the illusion of “rejuvenation”. But more importantly, it removes Parata and Smith from public view and from  media questioning.

As  housing and education are both going to be hot election issues this year, having Parata and Smith front to answer difficult questions regarding National’s problematic portfolios (health, education, housing, and dirty waterways) would be embarrassing. National’s tax-payer funded spin-doctors would be banging their heads against brick walls in sheer frustration.

Adams and Kaye had very little of the baggage that their predecessors had, in abundance.

Until, that is, on  15 March this year when then-Youth Minister, Nikki Kaye, launched into an ad hominem diatribe against Jacinda Ardern during a debate in Parliament. It was an orchestrated, pre-planned, personalised attack;

“ I want to talk about the deputy leadership of the Labour Party. We lost Annette King. I want to acknowledge Annette King. She has been a brilliant member of Parliament. She is someone who has huge respect across the House—and we got Jacinda Ardern. Now, I have been based in Auckland Central for 8 years. I struggle to name anything that Jacinda has done. What I can say is that a great example is when Kevin Hague and I developed an adoption law reform bill. We spent a year on that bill; we put it in the ballot. Jacinda Ardern did a one-line bill telling the Law Commission to write the law for her.

On her first day in the job as deputy leader, on one of the biggest issues confronting our generation, Generation X and Generation Y—on the issue of superannuation affordability—where was she? She had made a whole lot of statements previously about the importance of raising the age, and Jacinda Ardern was nowhere to be seen. She had cut and run on the biggest issue facing our generation, and that is another example of what is a whole lot of photo ops—yes, she will be across every billboard, but she absolutely failed our generation on her first day on the job.”

Ardern, to her eternal credit, refused to take the bait to dive head-first into a political sewerage and replied in a manner that epitomises statesmanlike behaviour;

“ It’s certainly not a style of politics I’ve seen her use before. Nikki and I have run against each other in Auckland Central for a number of years and usually pretty much stuck to the issues and avoided making it personal. I’m going to stick to that. I’m going to stick with the way I like to do politics, and it’s making sure that you keep away from making it too personal. But each to their own.”

It was also in stark contrast to the 2014 General Election where Kaye and Ardern agreed to conducting an issues-driven campaign and not resort to increasingly dirty, personalised attack-politics.

That agreement served both women well. They became (generally) more respected than their more “excitable” colleagues in Parliament who were not averse to “getting down and dirty in the bear pit of politics”.

Two days after Kaye’s attack, Jacinda Ardern went further and actually tried to defend her rival on Mediawork’s ‘AM Show’;

“ I just know that Nikki doesn’t believe that…

… I don’t actually think she believes that, because we’ve worked side-by-side, she knows the case work I’ve done, she knows what I’ve done locally, so I’m going to shrug it off. ”

National’s Deputy PM, Paula Bennet – herself no stranger to a bit of ‘bene-bashing’ to stir up support from the red-neck element in our society – was having none of it, and refused to accept Ardern’s placatory comments;

Bennett was making sure that Kaye’s vitriol would stick and no amount of charitable turning-the-cheek from Ardern would be allowed to dilute the venom.

The result of this petty bickering, name-calling, point-scoring chest thumping is ongoing public scorn and derision at behaviour they would not tolerate from their own children.

In her attack on Ardern, Nikki Kaye has shown that she is not above cheap politicking. It is not Ardern’s reputation that suffered when Kaye launched into her contrived bitchfest.

On the same ‘AM Show’ Bennett attempted to re-frame the viciousness of political scrapping by referring to it as “robust” debate;

“ Of course she meant what she stood up and said and she’s got every right to say it. It’s robustness, and when you step into leadership roles, you are going to be called out and times that’s going to be uncomfortable, and at times you are going to disagree. ”

“Robust” is one of those new ‘buzz-words’, like the increasingly loathed ‘resilient’ or weird-sounding ‘stake holders’. It  can be used to disguise bullying behaviour that would not be acceptable in any other workplace.

Imagine for a moment if the behaviour of personal attacks was replicated throughout society, in every workplace and home in the country. Such behaviour in domestic situations would be labelled domestic abuse. Very few would accept it as “robust discussion”.

Unfortunately, the host of the ‘AM Show’ – Duncan Garner – failed to pick up on this abusive aspect of politics. (Modern  media commercial imperatives demand conflict raging – not conflict resolution. Garner might as well handed both women a knife each and told them to get on with it.)

If Nikki Kaye (and all other Members  of Parliament) wants to work in a constructive, professional manner instead of a toxic culture of threats, point-scoring,  and abuse, each Parliamentarian is personally responsible for their own behaviour.

Ardern’s mild response to Nicki Kaye’s verbal abuse, and refusing to pander to Bennett ‘egging’-on, has raised the standard of behaviour for her parliamentary colleagues.

Ms Ardern was correct to refuse to lower herself to their level.

Kaye, Bennett, et al need to raise themselves up.

Nikki Kaye,  don’t let yourself be persuaded by your colleagues to engage in behaviour you would find unacceptable elsewhere.

Be the person you really are. You are better than this.

One of Nikki Kaye’s “criticisms” of Jacinda Ardern was that she “struggle to name anything that Jacinda has done”.

The simple reality that being in Opposition renders an MP with very little legislative power. Even when a Private Member’s Bill is drawn from the Ballot; debated; put through Select Committee process; and passed into law by a majority of MPs – it can still be vetoed by a dogma-driven Finance Minister.

However, even in Opposition,  Ms Ardern is not without her personal achievements.

In the 2014 General Election, Ms Ardern was Number 5 on the Labour Party list. Nicki Kaye was Number 19;

One of those parties has more faith in their candidate and her abilities than the other.

In her 15 March diatribe, Nikki Kaye accused Labour of indulging in a certain style of superficial campaigning;

When it comes to photo-ops, there is only one person in the last decade who mastered the art to a preternatural degree;

Whether it be babies, kittens, or puppies…

Though some weren’t quite so keen…

Some turned out to be downright dodgy…

And some turned into an unmitigated disaster…

But let’s get back to kitten and puppies – always an easy, safe bet for a photo-op… (especially with a visiting compliant Royal chucked in for good measure)…

And there were photo-ops-galore with various sundry Royals…

Chuck in an Aussie Prime Minister…

And another Aussie Prime Minister…

Yet another Aussie Prime Minister…

And – wait for it! – an Aussie Prime Minister!!

Ok, that line of Aussies was getting tedious. Let’s try something different.

Or the current Brit Prime Minister.

Slow down, Dear Leader, you’ve got Cameron dead in your sights for that manly grip…

Or a (former) US State Secretary…

And a Queen or two…

Some bloke from China…

And some bloke from America…

And we know what followed next…

Though perhaps not quite as embarrassing as this…

But just to keep the “common touch” with the Great Unwashed…

And when you get tired of doing your own driving…

But for the Top Prize for photo-ops, you just can’t get more Ordinary Blokey than hanging out with Ritchie and The Boys…

Still hangin’ out with Ritchie and The Boys…

Ah, John, I think this is The Boys telling you ‘enough is enough, go the f**k home!‘

Ok… getting a bit wanky now…

And then it just hits rock-bottom, in Key’s eagerness to be In-On-The-Act…

It’s obvious that our esteemed Dear Leader is not shy in front of a camera.

So… what was that you were saying about photo-ops, Ms Kaye?!

[Images and text above re-printed from previous blog-story: John Key is a principled man – except when a photo op arises (A Photo Essay) ]

TV3 News – The AM Show: ‘Gloves off’ for Bennett, Ardern on The AM Show

The Standard: “All show and no substance”

The Daily Blog: With all due respect to Nikki Kaye and Paula Bennett, if you want to slag off Jacinda Ardern

National MPs – giving us the finger in election year

Why Hekia Parata should not be sacked