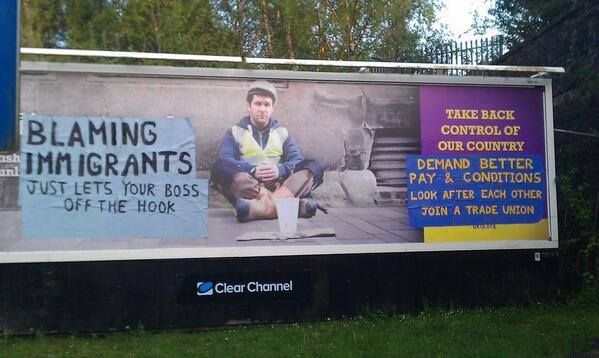 Electoral politics is about practicing the art of symbolism, and no more so than in election year. Reactive and populist political successes, aggravating and then preying on peoples’ fears in the election of Donald Trump and the Brexit campaign, show how unfortunately ripe ‘mature’ western democracies are for knee jerk, xenophobic responses to complex, structural problems. It’s the time and the era for political discourses that reinforce prejudices and divisions in society to reinforce the impression of divisions in politics even when the larger agenda shared among political parties is the same. At present in New Zealand we have a rush to the right to see which political party can distinguish itself from the others by blaming immigration and immigrants the most. And strange quarters, like the Labour Party, are coming up ‘Trumps’.

To paraphrase Malcolm X, if we’re not careful, we’ll end up hating the oppressed and loving the oppressors, and that’s the real risk with the anti-immigration foment here in New Zealand and around the Western World.

Instead of blaming the government and the neoliberal capitalist paradigm, for inequality, housing shortages and high costs, and low wages, we blame immigrant workers from the global reserve army of labour come here looking for better lives for themselves and their children. In Europe in an ultimate injustice, refugees from the ravaged Middle East get the blame. Here, some of our immigrants are from the world’s under-developed centres of poverty, working for a pittance because it’s more than they’d make back home. Think of the Filipino care workers, doing humbling, humane and hard work through long hours, for as low as $15.75 an hour, looking after our elderly. At the same time, we blame ‘them’, those ‘others’, ‘immigrants’, for working in servitude, for blocking our roads and buying our houses. (Even if we have several cars and houses ourselves).

We blame immigrants for occupying low paid jobs even though they might have high skills they can’t deploy sometimes because of prejudice against them. We blame immigrants for undercutting New Zealand wages instead of blaming the government and business sectors for a lack of industry relative minimum pay rates, like the old award system. We should be striving for no exploitation of any workers, not just ‘Kiwi’ workers, but including those from other countries come to live here, work here, or supplement the New Zealand work force.

Instead of blaming immigrants and immigration for Auckland’s traffic congestion and infrastructure deficits, we should hold current and previous governments and political parties, and their broader economic agenda, to account, for privatising assets, selling public services, withholding funding tools and investment in the physical and social infrastructure necessary for any city’s maintenance and growth. It’s not immigrants’ fault thousands of litres of partly treated sewage are washed into our harbours every rainstorm. It’s not immigrants’ fault we don’t have a decent public transport network.

It’s not immigrants’ fault that we’re a city of cars.

Statistics New Zealand reports that immigration is mainly driven out of Australia, China and South Africa. As well as seasonal workers from the Pacific, many immigrants are international students, ‘friendly state’ working holiday visitors as part of reciprocal ‘OE’ agreements, spouses and family of new New Zealand residents. Just as we welcome the right to have working holidays in those ‘friendly’ countries, to live with those we have fallen in love with, to learn and even live overseas, so people from the rest of the world, look to those opportunities here.

Manipulating fears of an Asian invasion, it’s the immigrants who don’t look like us, or talk like us that are portrayed as the greatest problem (“Asian drivers”, “Chinese speculators”, “Filipinos taking jobs in Christchurch and on dairy farms in the South Island”). Different physical characteristics or ways of living and dressing set non-European immigrants apart and make them obvious targets for racism. We’re happy to eat ‘exotic’ food, but don’t want those people living in our communities, or really, in our country. They should ‘assimilate’, ‘become kiwis’, ‘they’re destroying the Kiwi way of life’ – for ‘real kiwis’, and themselves, according to Jacinda Ardern, Deputy Leader of the Labour Party.

But in the year to June, 2016, 1/5 of immigrant arrivals were from Australia. 2/3 of them were returning Kiwis. And even though Auckland is feeling the pressure of population growth, the squeeze in Auckland is from a mix of causes, not just a single simplistic one. In 2012 we wanted Kiwis to stay in NZ, and come home. The 70,000 net population increase over the last three years is unprecedented, an artefact of economic and political convenience and circumstance, but to keep it in perspective, that equates to only a 1.5% population increase per annum. We’re already one of the most urbanised countries in the world in terms of proportion to the national population, and amid a long term and global trend toward urbanisation. And as our biggest city of opportunity, Auckland is naturally the main destination for internal migration too.

In this week’s announcement that Labour would cut up to 50,000 immigrants a year, by ‘going after’ work visas in particular, the party left unanswered, questions about who they’d cut. A subject for further policy announcements apparently, or maybe it’s policy rhetoric on the hoof, because the basis for those figures is unclear, the number is a bit fluid, it could be just a ‘breather’ to give infrastructure time to ‘catch up’. It might just apply to Auckland. And how would we know when the infrastructure has ‘caught up’? If it’s like past government promises of investing in public transport infrastructure to a decent level when the roading network is finished, then it’s not something we will ever reach an end state for, it’s like a mirage, a nirvana, a convenient story we are told just to get through.

Immigrants have become a scapegoat and an excuse for not even considering broader political and economic causes of Auckland’s problems. Broader workplace controls and minimum wage settings, levelling the playing field in investment property tax incentives, discussions about population growth per se, are all too complex, too challenging, un-necessary, when you can just blame immigrants for everything, and hopefully, probably, gain votes from middle New Zealand at the same time.
New Zealand’s early oppressive immigrant settler and colonial narrative was one where the dominant Western culture was portrayed as the optimum, and only desirable one. Capitalism, Christianity and colonialism were enlightened forces of development. Even still, if you’re of white European descent, you’ve got more chance of being a ‘real kiwi’. But New Zealand, and Auckland in particular, is a far more diverse, multi-cultural, and richer society than they once were because of recent immigration based diversification. But that original, colonial immigrant, capitalist narrative is dominant still. It’s a victor’s rhetoric, “we’re here now, we’re the righteous (white) occupants of this land, and the legitimate regime. We’ve made this society in our image, and unless you look like us, act like us, and accept the cultural and economic rules we impose, we’ll marginalise you, your beliefs and your way of life.” “What’s more, we’ll blame you for society’s ills’.

Instead of standing of the side of the cultural and capitalist oppressor and adopting its discourse of exclusion and the antagonism of difference, thinking workers of New Zealand, and elsewhere, should show solidarity with other workers and stand for better standards of living and workplace rights. Don’t blame the victim when the system itself is the problem.