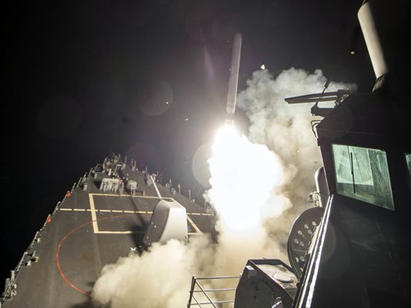 THERE WAS NEVER MUCH DOUBT in the minds of Austro-Hungarian military intelligence that Serbia was behind the June 1914 assassination of the Archduke Franz Ferdinand. Nevertheless, they allowed their police force and judiciary to conduct a thorough investigation before presenting the Serbian government with an ultimatum detailing the actions it would have to take to avoid war. The shelling of the Serbian capital, Belgrade, commenced only after the Serbian government’s response to Austria-Hungary’s ultimatum had been considered and rejected.

That is how a civilised nation responds to a terrorist attack.

Today, 7 April 2017 (NZ Time) the American President, Donald Trump, ordered the launch of 59 Tomahawk cruise missiles against military targets in the Republic of Syria. Having authorised an act of war against a fellow member of the United Nations, President Trump then called upon “all civilized nations to join us in seeking to end this slaughter and bloodshed in Syria and also to end terrorism of all kinds and all types.”

President Trump is, of course, relying upon the global outrage occasioned by the horrific gassing of Syrian civilians on Tuesday (4/4/17) to provide some sort of moral cover for his country’s flagrant breach of international law. The Trump Administration will point to the precedent established by President Bill Clinton in 1999. When, citing the “responsibility to protect” innocent civilians from lethal aggression by their own government, the Clinton Administration unleashed deadly airstrikes against the Republic of Serbia.

The problem with the Responsibility to Protect doctrine (apart from the fact that it is not recognised in international law) is that it is invariably invoked at moments of crisis, when it is extremely difficult, if not impossible, to verify the claims of the power, or powers, intent on doing the “protecting”.

In the case of the Khan Sheikhoun gassing, no time has been allowed for an independent investigation of the multiple accusations that the government of the Syrian President, Bashar al-Assad, is responsible. These claims, all of them made by enemies of the Syrian government, have not been tested by the United Nations Security Council. Nothing even remotely resembling proof of the Syrian Government’s guilt has been presented for international scrutiny.

The contrast between the conduct of the Trump Administration and the administration of George W Bush is striking. Prior to its invasion of the Republic of Iraq in March 2003, the United States Government dispatched its Secretary of State, Colin Powell, to the UN Security Council where he attempted to make the case for a military assault upon the regime of President Saddam Hussein. That Powell’s “evidence” of “weapons of mass destruction” subsequently proved to be completely false, does not detract from the fact that the American Government at least felt obliged to offer some form of justification for what it was about to do.

What has also become clear, since the missile launch, is that the American congress was not consulted or advised before the order to attack Syria was given. President Trump decided to make war upon another sovereign state unilaterally – apparently unconcerned that his decision was in clear contravention of Article One, Section 8, Clause 11 of the United States Constitution which states that “[The Congress shall have Power…] To declare War” – not the President.

No matter, President Trump was more than willing to advise his fellow citizens, and the world, that the Syrian President was a “dictator” who had “launched a horrible chemical weapons attack on innocent civilians”. He made this statement from his Florida retreat, Mar-a-Lago, breaking briefly from his talks with the Chinese President, Xi Jinping. The fact that President Xi also wields dictatorial powers, and that the Peoples Republic of China also stands accused of serious human-rights violations, clearly did not strike President Trump as either ironic or hypocritical.

The American President concluded his public statement by expressing the hope that “as long as America stands for justice, then peace and harmony will in the end prevail.”

More important, however, in terms of preserving “peace and harmony”, was the forbearance of the Russian President, Vladimir Putin. Informed by the Americans that an attack was imminent, President Putin advised his military commanders in Syria (and, presumably, his Syrian allies) to take no preventative or retaliatory action in response to the United States aggression.

For all our sakes, it is to be hoped that, in the days ahead, the Russian President’s commitment to civilised international conduct remains steadfast.