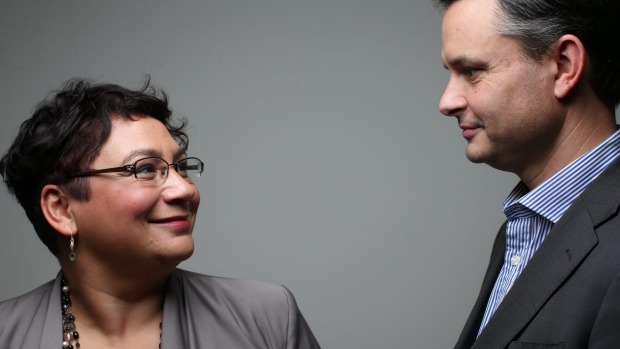 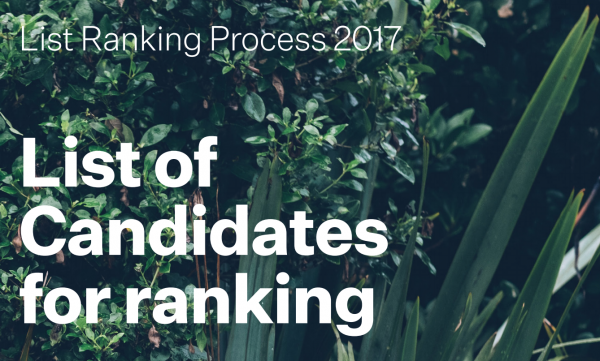 The Greens have released their initial list, now the factions splinter and pimp for their candidates.

It’s a good mix of new blood, which I argued for, but I still think they are being too safe. It’s good to see the huge numbers of green members who read TDB went with some of the ideas for a regeneration, but it’s just not enough to get above 11% in September.

How the Christ Jack McDonald got his ranking at 9 is a genuine surprise. The problem with the Green’s democratic process is that candidates start sucking up to the members which creates an insular list of people wanted by the members, but which can’t select candidates who will win over voters.

1 – Metiria Turei – She just gets better and better. One of the most genuine human beings in Parliament, and one of the best champions for human rights, Metiria is a political national treasure and if given room to make fundamental changes in welfare could be one of the greatest Cabinet Ministers we’ve ever had.

2 – James Shaw – Look, I’ll be blunt, I’m not a James Shaw fan. He’s pretty invisible most of the time and I’ve never warmed to the bloke, but the incredible skill and talent Shaw does bring is that he calms business and industry the fuck down. We can’t bring real change if the vested interests can’t be brought along for that change, and James has the ability to talk with business and industry and convince them that a Green Government won’t be Year Zero for them. Shaw is an essential part of the team and will be an important bridge to business and industry interests who will go into shock when Labour and Greens change the Government in September.

3 – Marama Davidson – As far as I’m concerned, she’s the Beyonce of the NZ Political world. All hail the Queen. I believe Marama is one of the best Politicians this country has and her compassion, generosity, tireless social justice campaigning and intelligence make her one of our more unique political talents and promoting her this far up the list is acknowledgement for the immense talent she brings to the Greens.

4 – Jan Logie – Jan is a political superstar. Her work on welfare and domestic violence makes her highly identifiable to the electorate as a champion for some of our most vulnerable. She is incredibly intelligent and her work over the last 3 years should be rewarded with an increase up the Party list.

5 -Gareth Hughes – The guys is just such a brain. You need a clever policy wonk like Hughes at the Cabinet Table if you want to effect real policy change. He has immense intellectual muscle and knows Energy inside and out.

6 – Julie Anne Genter – The Greens always do incredibly poorly in Auckland, and they desperately require an Auckland personality who can champion their cause. Genter could be our smartest Minister for Transport we’ve ever had in NZ history.

7 -Barry Coates – Yes I’m going there. Thrusting Bazza up this high is a nod to his huge activist support base and the incredible work he has done fighting TPPA. With Bill English bewilderingly still trying to push the TPPA through, despite Trump turning his back on the issue, Coates fight against the Trans Pacific Partnership isn’t over and the huge protest numbers are proof his cause has massive support in the electorate.

8 – Mojo Mathers – The disability community are a huge voting bloc who feel utterly ignored by the political landscape. Mojo’s own hearing impairment gives her true insight into disability issues and makes her a leader in Parliament. She and the electorate she represents deserves recognition.

9 – Chloe Swarbrick – Again, I’m going there. Chloe should be in the top 10 folks, the woman is a political event. Someone with her potential only pops along a couple of times a generation. Her incredible 3rd place ranking in the Auckland Mayoralty is nothing short of a political miracle. She connects with youth voters in a way I’ve never witnessed in my 25 odd years of political punditry, and giving her such a high ranking would excite the bloody hell out of the very electorate the Greens need to win in huge numbers if they are to hit 15% this election.

10 – Damon Rusden – Damon is a really interesting find as a candidate. He has guest blogged on The Daily Blog many times and his intellect and creative mind are surprisingly refreshing and he shows a worldview well beyond his 22 years of age. If the Greens want to appeal to their youth voter base, then stacking the top 10 with new faces and new blood is essential.

11 – David Clendon – David is an old hand and has enough experience behind him now to act as one of the Party’s internal guardians when it comes to process. Very important if you intend to be a member of Government.

12 – Eugenie Sage – Very intelligent and smart on the environment, but just hasn’t built enough of a profile to the wider electorate. Needs to be there because she is a policy wonk, but there are other candidates with stronger voting blocs.

13 – Golriz Ghahraman – Has there been a more perfect candidate? A human rights lawyer, a UN consultant and international justice fighter. She is a rising star, needs to be in the top 15.

15 – Robert Stewart – Huge networks in Dunedin where he has serious support. Strengthens the Greens in the South Island.

16 – Sam Taylor – I am a huge Sam Taylor fan, her enthusiasm and passion for politics, life and culture is deeply infectious. She is a Youth Justice Team Leader and Youth Worker with a Bachelor of Social Science. Perfect future Youth Minister.

18 -Dr Elizabeth Kerekere – Dr Kerekere carries huge mana in academia and within Maoirdom for her incredible work in Rainbow communities, youth and Treaty relations. A true kaumatua in every sense of the word. Would be an incredible gain for Parliament.

19 – Stefan Grand-Meyer – Well respected, highly intelligent and lots of interest in the voluntary and NGO sectors of society.

20 – Jo Wrigley – Strong Union voice inside the Greens who carries a lot of respect for her staunch stance on worker rights.

Here is the first blush of the new list…

3 Julie Anne Genter – Surprisingly higher than her terrible performance in the Mt Albert by-election should allow for.

4 Marama Davidson – Should be number 3, but good she has been boosted so high onto list.

10 Barry Coates – Had Coates at 7, deserves to be before Jack McDonald!

12 John Hart – Such a high ranking for such a rude arsehole on social media.

13 Chloe Swarbrick – Should feel very let down by the process, 13 while a staffer like McDonald gets 9? Ugh. Seeing as the youth vote is the only place the Greens can generate new voter mass from, placing chloe at 13 is a bit of a slap in the face to the youth vote.

The Greens would be lucky if they get 11% or 12% this election. I think Chloe and Golriz should be much higher because a higher ranking means their demographic will be far more inclined to come out and vote, which is the only way the Greens can get to 15%.

NZ First are poised over the next 6 months to possibly over take the Greens as the 3rd largest Party, this list has shaken some of the old guard with some fresh blood, but I don’t think it’s enough to excite the voters the Greens need to win to prevent NZ First from over taking them.

The factions will start to massage the numbers now, so it will be up to them to create something meaningful out of this, however when you consider what a mess this press release was for the Greens, I suspect the internal staffing problems are too large for them to overcome in time for September.