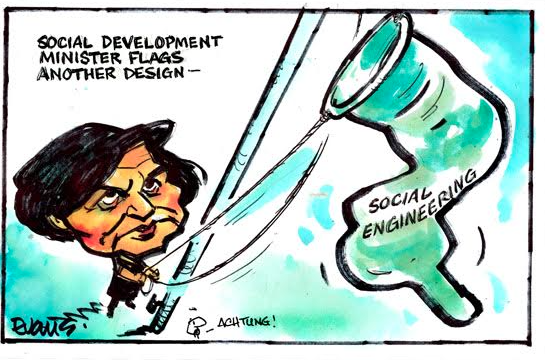 Do you remember when Anne Tolley revealed the need for massive changes at CYFs?

Of course you don’t remember. In NZ we only have the cultural memory of the last season of the Bachelor, we can’t remember anything that happened beyond 18 months most days.

I remember what happened.

It was hilarious and managed to sum up all the petty spite that passes as foresight in this tiny little nation of ours.

Anne had just released an incredibly damning report into CYFs that showed children in State care were being so badly abused WHILE IN STATE CARE that children actually had less chance of being abused if left in the wider community than they did if taken into State Care...

Children removed from their family home are being sexually and physically abused in foster homes – and the Social Development Minister says there’s no evidence they’re any better off in state care.

Children’s Commissioner Russell Wills has released his first annual report in to how well Child Youth and Family (CYF) are looking after children in state care. His findings reveal the Government department is failing thousands of children.

Children interviewed for the report spoke of sexual, physical and verbal abuse in foster homes; of being moved around constantly; separated from siblings; depression, drugs and alcohol.

Social Development Minister Anne Tolley said none of the findings in Wills’ report were a surprise.

Wills said CYF was failing to put children at the centre of what they do.

“When children are in care, Child Youth and Family is effectively their parent. That is a significant responsibility,” he said.

“These children should come out of the system in a better place and with the prospect of better future lives. Unfortunately we can’t say they are.”

In 2013-14 there were 117 children in the custody of CYF reported to be abused; 88 were in the care of a CYF caregiver, 25 were formally placed with their parents but still officially in CYF custody, and five were abused while living with an unapproved caregiver or in an unapproved placement.

Children interviewed for the report said despite abuse being quite common, very few cases were officially recorded.

Consider that truth for just a chilling moment. Children were less likely to be physically or sexually abused if left in the wider community than if taken into State Care.

We should be deeply ashamed of that.

So what was the reaction to news that children in CYFs care had more chance of being abused than if they were just let left in the wider community?

Why sterilisation of course.

That’s right, Anne Tolley’s first attempt to privatise CYFs into the Ministry of Vulnerable Children was to blame the beneficiary parents who kept having children. The knuckle dragging reason behind sterilisation was that if these terrible parents stopped having kids, then the state wouldn’t have to deal with so many, which would make the total number of children abused by the State a numerically smaller total.

Anne quickly backed away from her sterilisation comments, but instead of actually holding CYFs to account for the high number of children they were abusing, she simply remodelled the existing CYFs into a Ministry of Vulnerable Children which had mass surveillance powers over the lives of those it was responsible for.

No demanding why this underfunded model was causing the damage it was in the first place.

No holding anyone to account for historic damage caused.

No forcing the Government to actually do something.

Just a new lie dressed up with the old lie to paint a future lie that will never exist.

I just love that the first knee-jerk reaction was to attack the contraception of beneficiaries, its just manages to sum up everything petty about NZ.

CYFs has been remodelled 14 times before this, watching the mainstream media pundits faithfully do their sympathetic head nodding bullshit as the latest bureaucrat is wheeled out to promise a better future, as was seen on The Nation this weekend, is probably the most sickening part of this masquerade.

Key report findings:
• It is not uncommon for a young person leaving CYF care to quickly end up homeless, jobless, and lacking support from a caring adult.

• Many will become parents themselves very young. Others end up in prison.

• In 2013-14, there were findings of substantiated abuse relating to 117 children in the custody of CYF.

• Some CYF residences needed to be upgraded, the report found. “In one residence, a number of young people complained that sleeping in close proximity to their in-room toilet was unpleasant.”

• CYF has difficulty recruiting and retaining staff, and capability issues mean some staff do not have the skills and capability necessary to do their job well.

• Many CYF sites have unfilled vacancies. It is challenging for sites and residences to recruit Maori staff.

• Issues with retention of staff were due to people moving into different jobs within the sector or experiencing burnout.

• Some Youth Specialty Service carers characterised CYF’s attitude to placement of children as “dump and run.”

This is an underfunding issue, and because we have a hard right Government who actively mutilate the States ability to generate revenue so that it can’t afford its social obligations, that makes this child abuse at the hands of the state a political decision, not an economic reality.

We refuse to look at abuse in state care because our cultural need to blame the beneficiary for being in such personal circumstances that require state intervention is what most angers middle Nu Zilind , NOT that the state then goes onto abuse, assault and sexually molest the taken children.

We refuse to blame the system of poverty that sees tens of thousands of children go to school hungry each day and we blame the parents for the 220 000 kids who live in poverty.

We here at The Daily blog have launched an election platform for all beneficiaries who have been abused, belittled and emotionally damaged by their interaction with the neoliberal welfare state.

The stories that have come in to date are heartbreaking and we have many more coming.

There are almost 300 000 beneficiaries in New Zealand, yet their voice and true political muscle are ignored and forgotten. The Daily Blog offers them a chance to take back some mana and have the empowerment of a platform that will amplify their truth anonymously so that the Government agency can’t punish them.

National have run down the revenue streams and borrowed billions for tax cuts, they have no choice but to cost cut using privatisation in social welfare and the neoliberal welfare state will continue to abuse and damage the most vulnerable needing their help.

I am convinced that the draconian policies of the neoliberal state are part of why our suicide rates are so horrifically high.

An incoming Government must look to radical reforms within the Welfare State that starts putting peoples actual welfare first rather than the idealogical cruelty so many within these agencies enjoy over their fellow citizens.