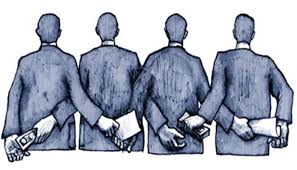 There’s a pattern. The government lets companies regulate themselves until they get exposed for causing damage to the public interest. Deny, fudge, delay, until there is enough of an outcry that it starts to be politically damaging. At that stage, the government does just enough to make the public think that the problem is sorted. But not enough to stop the companies from making big profits.

This is the pattern of so called ‘light regulation’ that has allowed companies to get away with pollution of our rivers, illegal fishing, the Pike River mine disaster, leaky buildings, truck shops ripping off consumers, loan sharks, exploitation of migrant workers, etc.

In addition, some recent financial examples have been the scandal of tax havens, exposed in the Panama Papers, and massive tax havens. Last week, the government introduced new legislation on money laundering.

The government has had plenty of warnings about money laundering. A 2009 evaluation of New Zealand’s money laundering controls undertaken by the Financial Action Task Force (FATF) found 197 investigations into money laundering between 2004 and 2008 relating to fraud, drugs, robbery, theft, blackmail and burglary. Their critical report in 2010 resulted in New Zealand being struck off the ‘White List’ list of non-corrupt countries by the EU.

One of the key ways that money is laundered in New Zealand is in real estate. The NZ Police Financial Intelligence Unit (FIU) last year noted real estate remains an attractive option for money launderers, both in the layering and integrating of the proceeds of crime. An example quoted by Caroline Courtney in North-South was of a foreign house buyer viewing more than 50 houses and snapping up in excess of 40 of them in one buying spree.

Dirty money laundered through buying and selling houses is not only a way to clean the money, it’s also tax free. It is likely that dirty money has been a big influence on the house price bubble. People who can’t buy a house and who have to suffer high housing costs are collateral damage.

Money laundering is also closely linked to gambling and political influence. In August last year, the High Court ordered recovery of $42.85m from William Yan and associates after a money-laundering inquiry. William Yan (also known as Yang Liu) was granted citizenship by the former Minister of Immigration, Shane Jones, overruling the advice of officials and attracting criticism from the Auditor-General. He gave political donations to the National and Labour parties and gambled $293million at Sky City over 12 years, losing $23 million. Sky City was allowed to keep the money, even though at least part of the funds were probably the proceeds of crime.

After public concern and pressure from the FATF, the government passed a first phase of anti-money laundering laws in 2009. However, these didn’t come into effect until 2013, and covered only banks, financial intermediaries and casinos. They clearly did not go far enough, and finally phase 2 legislation on money laundering has now been introduced into Parliament, requiring lawyers, accountants, real estate agents and others to report on suspicious transactions.

Will the new Anti-Money Laundering Bill be strong enough to stop the flood of dirty money into New Zealand? The signs aren’t promising. Already the government has delayed the introduction of the Bill, weakened its provisions, carved out companies that have activities outside New Zealand, and narrowed its scope after lobbying. The Minister, Amy Adams, admitted that the Bill was only a start in that it would disrupt only$1.3 billion each year, a small fraction of the estimated level of money laundering.

Proper regulation of our economy is needed. We need to crack down on white collar crime that is facilitating crime, the drugs trade, speculation in property and eroding public trust in the financial sector and the government.

The Green Party will be pushing hard for a stronger money laundering Bill, as well as other measures. These include a Diverted Profits Tax to ensure multinationals pay their fair share of tax, a public register for foreign trusts to stop our collusion in tax havens, a requirement that only residents can buy residential homes, a capital gains tax, and a requirement that casinos should forfeit the profits they make from gamblers using the proceeds of crime.