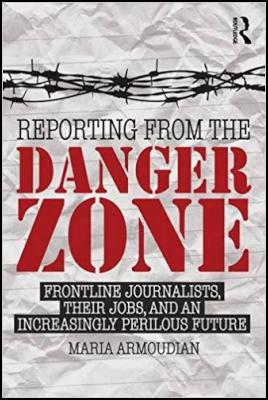 After a member of the country’s Special Forces was killed during a raid in Afghanistan, Jon Stephenson, co-author of Hit and Run, sought to fact-check what he believed was propaganda disseminated by the New Zealand government.

“They took the unusual step of talking about what had happened in some detail while providing their account of what happened,” he said to University of Auckland lecturer Dr Maria Armoudian for her new book, Reporting from the Danger Zone: Frontline Journalists, Their Jobs and an Increasingly Perilous Future.

Dr Armoudian, a lecturer in the School of Social Sciences at the University, wrote Reporting from the Danger Zone to reveal the complications facing frontline journalists who cover warzones, hot spots and other hazardous situations.

The book details the risks that journalists take to reveal what they believe are important truths about life and death matters, in the face of shrinking journalism budgets, greater reliance on freelancers, tracking technologies, and increasingly hostile adversaries.

In the book, Stephenson said: “We hear about these things—if we hear about them at all—in a very opaque sort of manner, but no one knew anything about it. It was completely covered up. It wasn’t until a year later that some details leaked out almost by accident. And the Defence Minister, during an interview on television, was confronted with the question ‘Did this involve the SAS?’ and he essentially confirmed, but very few details were given.”

That’s what sent Stephenson unilaterally into Afghanistan. “That’s been a big weakness with New Zealand’s coverage of the so-called war on terror because we haven’t had [witnesses] in Afghanistan. You can find out a lot by going on the ground that you can never find out back [reporting from home]. Of course, that’s very difficult work.”

A flight to India, a train ride to the border of Pakistan and a long walk along that border took him first in to Pakistan and eventually into Afghanistan where Stephenson found the village and interviewed witnesses. “It took me quite a while to find out from sources the location of the village. And the village was in an area that was very risky to travel to. So I ended up going to meet people from the village, because civilians died in that operation,” he said. “I got a very different story from the one that had been presented in the media or presented by the Defence Forces, the scripted version.”

“Stephenson took great risks—for his own safety and reputation—to seek this information on behalf of his fellow New Zealanders. We rely upon journalists to uncover and reveal information that governments prefer to keep concealed,” said Dr Armoudian.

“In this particularly trying time for journalism, you have to admire Stephenson for his willingness to risk everything to physically go into the danger zone to report on this important matter.”

Dr Armoudian is also the author of Kill the Messenger: Media’s Role in the Fate of the World.