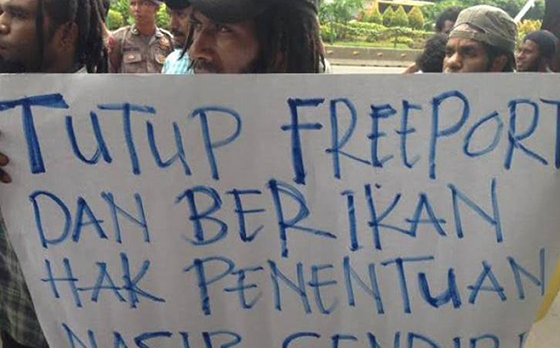 From the Pacific Media Centre’s Asia Pacific Report. West Papua is the ongoing Pacific human rights story that the mainstream New Zealand media ignores. Freeport in West Papua is the copper and gold mine – the world’s second largest — that the $20 billion NZ Superannuation Fund was forced to pull out of in 2012 after sustained protest about its “unethical” investment in the company.
PROTESTERS from the Papuan Student Alliance (AMP) and religious pupils from an Islamic boarding school (pesantren) have faced off against each other at the Malan city hall in East Java.Both groups held the protests on Friday under tight police security, as West Papuan protests over Freeport took place at several other places across Indonesia over the weekend.Scores of demonstrators from the AMP and the Indonesian People’s Front for West Papua (FRI-West Papua) unfurled banners and conveyed a number of demands, including the closure of the PT Freeport gold and copper mine in Papua.They also brought banners with demands such as, “A joint action to support the Papua problem at the United Nations Human Rights Council” and “Close and Expel Freeport”. Protesters took turns in giving speeches.

The spokesperson for the AMP and FRI-West Papua, Wilson, said that the action represented Papuan society’s anxiety saying there are so many violations at PT Freeport that it was creating ever more misery in the land of Papua.

The action also demanded the right for and self-determination for the nation of West Papua. The groups also demanded a resolution to human rights violations in Papua and the withdrawal of the Indonesian military from the land of Papua.

Counter action
Meanwhile, five people calling themselves the Malang City Darul Hikmah Kebonsari Foundation Islamic Boarding School Religious Pupils said they were there to counter the action which they believe threatened the disintegration of Indonesia.

“Our action is intended to counter them”, said Widoku Rahman, one of the religious pupils taking part in the rally.

The religious pupils claimed that would continue to monitor actions by the AMP who they believe is promoting separatism because of their demands for independence. The group supervised the action from the beginning until the end.

“Please if you want more information contact the head of our boarding school”, said Hadi Widiyanto, one of the other religious pupils.

Although one of the participants brought a megaphone, it was not used for a speech.

KBR audio report on the Jakarta protest in Bahasa.

In Ade Irmansyah, Jakarta, KBR reported that action coordinator Samsi Mahmud said taking the issue to the United Nations was the only way to resolve the numerous problems in Papua, particularly human rights violations.

Samsi also urged the government of President Joko “Jokowi” Widodo to give the Papuan people the right to self-determination.

“We also want to convey to the people of Indonesia, to the Indonesian government, the wishes of the Papuan people, namely that self-determination is the democratic solution for the future of our people and our nation. And for us, in relation to the problems that exist in Papua, the solution is self-determination for the Papuan people”, he said in a speech in front of the United Nations representative office for Indonesia in Jakarta.

Samsi also called on the government to withdraw all military forces, including the police. from the entire Papuan territory saying that the presence of military forces was causing human rights violations in Papua.

Translated by James Balowski for the Indoleft News Service.