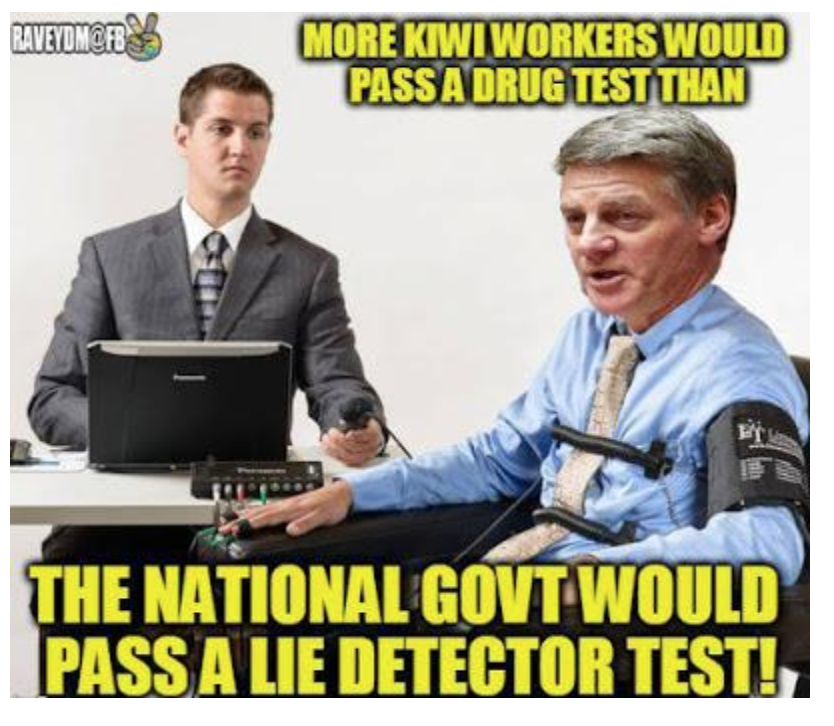 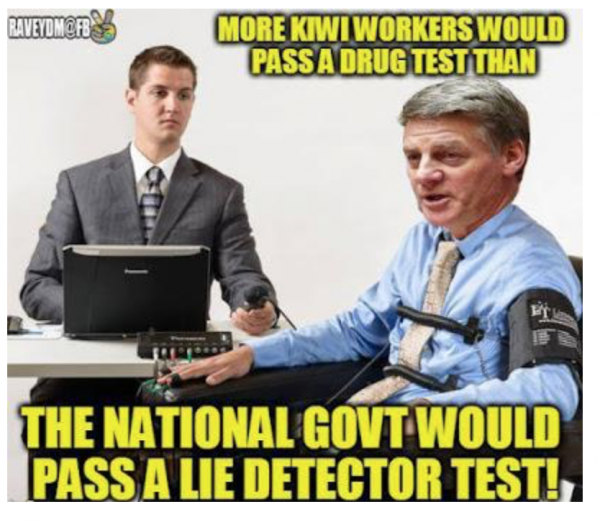 New Zealand’s un-elected Prime Minister has taken a swipe at workers for refusing unfair and intrusive tests of their bodily fluids. We should all be lining up to joyfully pee in Bill English’s cup!

Not content with checking the pee of beneficiaries, the leader of the Big Business Party has now complained about local workers, blaming their refusal to submit to pee tests for the National Party policy of encouraging record immigration, which others say is making housing unaffordable, depressing wages and driving locals out of work.

The “anecdotal evidence” English had heard was that employers needed to import low-paid immigrant labour because they could not find Kiwi workers who could pass drug tests. It comes just a few months after his predecessor, John Key, said the same thing.

However even if this is true, it says more about low-paying employers and structurally low wages being below what it takes to live in this country, and what’s more it is happening under the current law: the Misuse of Drugs Act they passed way back in 1975, and continue to defend to this day.

Criminal sanctions have failed to prevent or reduce cannabis use. They have instead created a lucrative black market controlled by organised crime, that is fueling their expansion into methamphetamine and other enterprises. Sanctions around what workers can do with their own mind and bodies have likewise failed to prevent use, measure impairment, or reduce workplace risks.

There are several problems with Bill English’s approach:

1. It may not be legal. There is no law allowing workplace drug tests, so they require the consent of the worker. If it’s not in your employment contract, you don’t have to do it, unless you work in a safety sensitive role. The Supreme Court has ruled, in NZ’s only precedent case which involved Air New Zealand and the EPMU, that random workplace tests are unlawful unless restricted to the most safety sensitive roles. They gave as examples within Air NZ the engine mechanics but not the pilots or tarmac drivers. Because they are highly invasive and demeaning, workplace drug tests may also breach the Bill of Rights (unreasonable search and seizure), the Human Rights Act, and the Privacy Act.

2. It doesn’t work. One of the early and enthusiastic adopters of workplace drug testing in NZ was the forestry industry – yet they remain one of the most dangerous industries to work in, with 32 deaths from 2008 to 2014, 15 times the national average. Impairment on the job is a real issue, however urine testing does not actually measure impairment. Urine tests will pick up traces of cannabis up to four months after the last use. There is no way that cannabis use would affect job performance the next day, let alone several months later. Heavy or regular users (including medicinal users) may always have traces in their system, whether straight or high. Every business that touts drug testing services knows this, yet they push their sham products onto gullible employers desperate to appease their insurers and country club colleagues. This faulty methodology creates disrespect and animosity from workers, who seek ways to beat the system they rightfully perceive as unfair and stacked against them.

3. There are better approaches. We don’t need the State to go around arresting and punishing citizens for what they choose to do on their own time. Research from the USA found lower rates of absenteeism in states that allowed medicinal cannabis. Use of cannabis is associated with lower rates of accidents, according to actual research (not the anecdotes preferred by our Prime Minister). There are more effective ways to reduce safety risks in the workplace – such as better training and management, better equipment and working conditions, reducing fatigue and allowing more rest breaks, not forcing workers to perform mundane mind-numbing tasks, not forcing workers to take up overtime or extended shifts, paying decent wages, and so on. These costs tend to lie with the employer, and this may explain why so many are duped into taking up the cheaper option of forcing their slave-workers to demean themselves by peeing in cups.

Setting a THC level that is based on evidence and comparable to alcohol impairment would be more effective, just, and more widely accepted by workers and decent employers. To that end, NORML has developed a model workplace policy for off-the-job cannabis use in order to help employers implement a more tolerant and enlightened workplace drug policy, a guide to drug testing in order to help employees disadvantaged by the current regime, and an iPhone App that more accurately measures impairment.