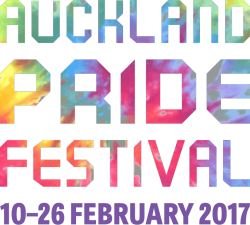 With over 80 events live on the website and the FREE Pride Guide programme out on the streets, the much-loved Auckland Pride Festival (10 – 26 February) is just one week away!

Our biggest Auckland Pride Festival to date, 2017’s programme showcases the many and diverse talents of the Rainbow communities of Aotearoa, as well as some breathtaking international acts. The 2017 Festival commences with a spectacular official opening night, The Auckland Pride Gala on Friday 10 February, and climaxes with the massive Auckland Pride Parade on Saturday 25 February.

A best-of-the-fest black-tie extravaganza, The Auckland Pride Gala returns to Q Theatre on Queen Street for the official opening of Auckland Pride 2017! This fabulous evening showcases the most dramatic performances and devastatingly talented performers whose full-length works feature within the Auckland Pride Festival programme.

In keeping with Auckland Pride’s kaupapa of progress and change in 2017, this year’s Gala will be hosted by New Zealand’s beloved trailblazing transgender politician and superstar, Georgina Beyer. Georgina will be accompanied by the voice of a new generation, respected young Fa’afafine performance artist and Auckland Pride Board member, Jaycee Tanuvasa.

Auckland Pride Board chair, Kirsten Sibbit says, “Auckland Pride’s role is to reflect the different needs, perspectives and views of our communities, and to provide safe spaces to celebrate our achievements and talk about our issues. The Festival does this through an incredibly varied range of events, from theatre and literature to sporting tournaments, drag cabaret to debates and discussions, even gardening and pets.”

Auckland Pride’s final weekend will be HUGE! New Zealand’s largest and loudest carnival of change and diversity, the Auckland Pride Parade 2017 will rock and roll along Ponsonby Road on Saturday 25 February from 7.30pm. With over 50 fabulous float entries, the Parade will commence at the north end of Ponsonby Road near Tole Street, progressing along Ponsonby Road, to finish just past Western Park.

The theme for this year’s Auckland Pride Parade – Pride and Progress: The Carnival Continues – recognises the ongoing journey for our Rainbow communities, and the need for continued change.

Following the Auckland Pride Parade on Ponsonby Road, continue around the bend to K’ Road – the heart of Auckland’s queer nightlife – for PROUD 2017, the biggest LGBTIQ+ party of the year, incorporating all levels of the indoor Studio superclub, plus an outdoor Galatos Street party.