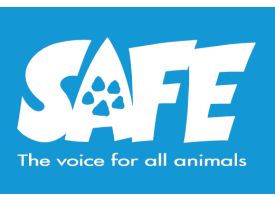 Following the release of new video evidence filmed at the Mid Northern rodeo in Whangarei demonstrating the brutality of rodeo events, plus further footage from the Upper Mohaka rodeo, eight companies have severed ties with rodeo, says SAFE.

Real estate agents LJ Hooker, Ray White and Harcourts; Firth Industries, Rock Gas, Saddlery Warehouse, Placemakers and Meridian Energy, have all pledged that they or their franchisees will not sponsor rodeo. A representative of Saddlery Warehouse said: “As of today it is policy that no Saddlery Warehouse store can sponsor a rodeo event.” Similarly, LJ Hooker says it “does not condone any form of animal cruelty.” Firth Industries said, “While Firth encourages local teams to support local events, the teams are being advised not to support rodeo events in the future.” Meridian Energy was surprised to hear it was listed as a sponsor, saying that they had not done so since 2008. They said, “Meridian does not condone cruelty to animals, which includes events like rodeos that have recently been highlighted as putting animals at risk.”

SAFE says rodeos rely on their sponsors, who give money or donated goods, and would not be financially viable without them, which is why it is significant that companies are withdrawing their support. Rodeo is already condemned the world over by animal welfare experts. New Zealand has seen an increase in anti-rodeo sentiment with a recent poll showing 59% want a ban. Just 25% want rodeo to stay.

“The bullying of animals for the fun of a minority is not something businesses want to be aligned with, when they see the cruelty involved in rodeo”, says Mandy Carter, head of campaigns. “We commend those companies who have turned their back on rodeo and urge all sponsors to follow this compassionate lead and instead support positive community events that are animal-friendly.”

The new footage from Mid Northern rodeo which horrified many shows animals in clear distress. A bull crawls on his knees, in a desperate attempt to get away from rodeo performers; young calves are shocked with an electric prod while confined in a chute, which is a breach of the rodeo code of welfare; a rodeo performer roughly wrenches a calf’s leg and body in his attempt to tie the animal’s legs together. When members of the public were shown this footage by RNZ’s Checkpoint, all said it was not an acceptable way to treat animals. Within hours of the footage being released on SAFE’s social media, rodeo sponsors reported receiving hundreds of emails from concerned animal lovers.

During rodeo events, animals are grabbed, ridden, and wrestled aggressively as part of the ‘entertainment’. The animals can sustain serious injuries such as fractures and bruising. Rodeos deliberately subject animals to fear, stress and torment. They are a cruel and outdated spectacle where each event compromises animal welfare.

SAFE points out that by sponsoring rodeo, companies are associating themselves with the abuse of animals for entertainment – something that can be damaging to their brand and be viewed negatively by their customers. Whilst appreciating that companies want to be involved with the local community, SAFE says there are many alternative activities they can choose to sponsor that do not involve cruelty.

SAFE encourages people who want an end to the cruelty of rodeo to contact sponsors asking them to withdraw their support.