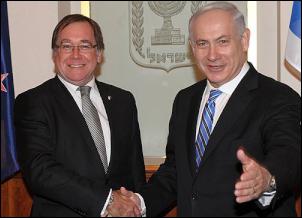 The assertion by Juliet Moses on 6 January in the New Zealand Herald article, Israel vote was an affront to all New Zealanders, echoes the arrogance of Zionism’s unjustifiable claim to speak and act on behalf of all Jews. What is offensive, is to assert that all New Zealanders would be affronted by the passing of a Security Council Resolution that upholds the tragically hard-won provisions of the Fourth Geneva Convention.

Moses writes that Resolution 2334 “deems” all settlements beyond the 1949 armistice lines to be a flagrant violation of international law. The resolution doesn’t merely ‘deem’ them to be – it is a reminder to the world of an undeniable fact of international law. Her article refers to “Israel’s policy of trading land for peace”. Israel needs to be told that to attempt to trade stolen land is a criminal act. On 3 July 1969, UN Security Council Resolution 267 recalled that, since the adoption of earlier resolutions, “Israel has taken further measures tending to change the status of the City of Jerusalem” and reminded Israel, yet again, of “the established principle that acquisition of territory by military conquest is inadmissible”. The UNSC confirmed that “all legislative and administrative measures and actions taken by Israel which purport to alter the status of Jerusalem, including expropriation of land and properties thereon, are invalid and cannot change that status”. These principles of international law are non-negotiable.

Israel and the United Nations
At the time of Israel’s ‘Declaration of Independence’ there was no United Nations ceremony and no welcoming speeches by world leaders at the unfurling of the new Israeli state’s flag. The United Nations Partition Plan, with good reason, had still not been implemented. Instead, on 14 May 1948, David Ben-Gurion (Israel’s first Prime Minister) pre-empted the Partition Plan by unilaterally asserting the existence of the state of Israel in Palestine.

There was disagreement in Washington over the ‘Declaration of Independence’, especially between President Harry Truman and Secretary of State, George C. Marshall, and the majority of the US foreign policy establishment. In March 1948 The Washington Post columnist Richard Holbrook wrote that Truman had already promised the future President of Israel, Chaim Weizmann, that he would support the Jewish Agency’s proposal to partition Palestine and split it apart. That promise had been made in confidence. According to Holbrook, “With only a few hours left until midnight in Tel Aviv”, Clark Clifford, Truman’s aide, “told the Jewish Agency to request immediate recognition of the new state, which still lacked a name.” Just eleven minutes after the Tel Aviv declaration, at 6:11pm on May 14, Truman announced US recognition. According to Holbrooke, this was done so rapidly that in the official announcement, the typed words “Jewish State” are crossed out and replaced with the words “State of Israel”. The President of the United States created the precedent for recognition of Israel and other world leaders quickly fell into line.

Facts on the ground
Following the adoption of UN Resolution 181, there came the destruction of Palestinian homes, either blown up or bulldozed, as Israel violently forced three-quarters of a million Palestinians to become refugees. From 9 to 11 April, a month before the ‘Declaration of Independence’ and confident of US support, Israeli forces set about the ethnic cleansing of the village of Deir Yassin and the implementation of Israel’s own version of the UN Partition Plan. The massacre exemplified the malevolence that Zionism harbours towards the indigenous people of the land it covets. Today, Israel’s expanding West Bank settlement programme continues to push the Zionist project ever forward, and Palestinian homes continue to be bulldozed and blown up.

UN General Assembly Resolution 181
The UN Special Committee on Palestine (UNSCOP) was established on 15 May (Resolution 106), charged with the task of investigating further and to “submit such proposals as it may consider appropriate for the solution of the problem of Palestine”. The UNSCOP report concluded that Palestine was being denied the same right to self-determination that was adhered to with regard to other Arab territories. This denial of Palestinian independence was due to support by powerful interests for the goal of establishing a Jewish state in Palestine.

While UN General Assembly Resolution 181 recommended that the UNSCOP partition plan be accepted and implemented by the concerned parties, that did not, of itself, confer upon the Zionist leadership any legal authority to unilaterally declare a state. For there to be any legal basis for such an outcome, both sides would have had to have formally agreed to it. That they clearly did not.

Zionist discrimination within the Israeli state
The blight of Zionist discrimination asserts itself both within Israel and in the Occupied West Bank. For example, Rabbi Arik Ascherman, founder of Jews and Arabs for Defence of Human Rights, reports that on 15 January this year, yet more residents of the Bedouin village of Umm Al-Hiran will be forced from their homes. Israel aims to remove these people in order to establish the Jewish-only town of Hiran. Ascherman notes that a 100-year-old Israeli Bedouin citizen, Musa Hussein Abu Al Qian, is among those to be evicted, along with his family “simply because they aren’t Jewish.”

Juliet Moses calls for the co-existence of a “secure” Jewish state alongside a Palestinian state that she envisages as merely “viable”. Israel’s founding ideology, it seems, simply cannot acknowledge the Palestinian people’s right to security. So while Palestinian refugees continue to be denied their right of return, the Israeli military goes on creating more Occupation facts on the ground. The Palestinian people can only look to the world community, that chose to place them in this invidious situation, for support now in requiring Israel to respect and abide by international humanitarian law.