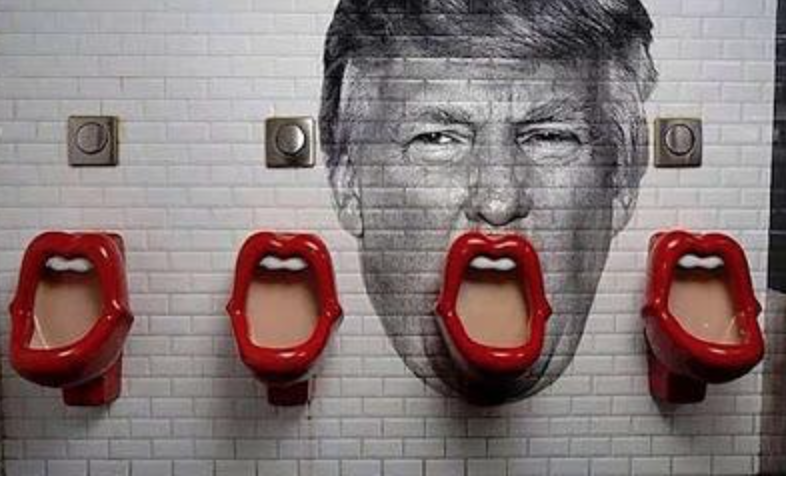 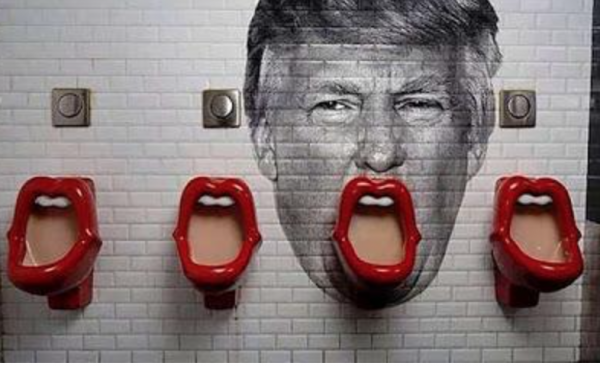 I think his offensive grossness and uncivil abuse has no place in the top job.

I think he is incompetent, I think he is malicious and I think he is ultimately wanting cultural revenge against  his peers. He is manipulative of the anger of his voters and he is a scam artist.

He also won the election.

There are plenty of reasons to be concerned about Donald Trump’s Presidency, but what is far worse than his terrible potential is what the American Military Industrial Complex are doing right now by smearing and framing Trump with unverified and false dirt from a paid political mercenary.

The Intercept spells it out best...

The serious dangers posed by a Trump presidency are numerous and manifest. There are a wide array of legitimate and effective tactics for combatting those threats: from bipartisan congressional coalitions and constitutional legal challenges to citizen uprisings and sustained and aggressive civil disobedience. All of those strategies have periodically proven themselves effective in times of political crisis or authoritarian overreach.

But cheering for the CIA and its shadowy allies to unilaterally subvert the U.S. election and impose its own policy dictates on the elected president is both warped and self-destructive. Empowering the very entities that have produced the most shameful atrocities and systemic deceit over the last six decades is desperation of the worst kind. Demanding that evidence-free, anonymous assertions be instantly venerated as Truth — despite emanating from the very precincts designed to propagandize and lie — is an assault on journalism, democracy, and basic human rationality. And casually branding domestic adversaries who refuse to go along as traitors and disloyal foreign operatives is morally bankrupt and certain to backfire on those doing it.

Beyond all that, there is no bigger favor that Trump opponents can do for him than attacking him with such lowly, shabby, obvious shams, recruiting large media outlets to lead the way. When it comes time to expose actual Trump corruption and criminality, who is going to believe the people and institutions who have demonstrated they are willing to endorse any assertions no matter how factually baseless, who deploy any journalistic tactic no matter how unreliable and removed from basic means of ensuring accuracy?

All of these toxic ingredients were on full display yesterday as the Deep State unleashed its tawdriest and most aggressive assault yet on Trump: vesting credibility in and then causing the public disclosure of a completely unvetted and unverified document, compiled by a paid, anonymous operative while he was working for both GOP and Democratic opponents of Trump, accusing Trump of a wide range of crimes, corrupt acts and salacious private conduct. The reaction to all of this illustrates that while the Trump presidency poses grave dangers, so, too, do those who are increasingly unhinged in their flailing, slapdash, and destructive attempts to undermine it.

“At every level this report is a failure,” says security researcher Robert M. Lee. “It didn’t do what it set out to do, and it didn’t provide useful data. They’re handing out bad information to the industry when good information exists.” At issue is the “Joint Analyses Report” released by DHS last Thursday as part of the Obama administration’s long-awaited response to Russia’s election hacking. The 13-page document was widely expected to lay out the government’s evidence that Russia was behind the intrusions into the Democratic National Committee’s private network, and a separate attack that exposed years of the private email belonging to Hillary Clinton campaign chair John Podesta.

Instead, the report is a gumbo of earnest security advice mixed with random information from a broad range of hacking activity. One piece of well-known malware used by criminal hackers, the PAS webshell, is singled out for special attention, while the sophisticated Russian “SeaDuke” code used in the DNC hack barely rates a mention. A full page of the report is dedicated to listing names that computer security companies have assigned to Russian malware and hacking groups over the years, information that nobody is asking for.

Rather than focusing on the Russian intelligence services, the U.S. seemingly opted to gather all Russia-sourced hacking under a single rubric, code named “Grizzly Steppe,” putting everything from online bank heists to identity theft in the same bucket as the Kremlin-linked intrusions into the White House, State Department, and the DNC.

Though the written report is confusing, it’s the raw data released along with it that truly exasperates security professionals. The department released 876 internet IP addresses it says is linked to Grizzly Steppe hacking, and urged network administrators everywhere to add the list to their networking monitoring.

Lists of IP addresses used by hackers can be useful “indicators of compromise” in network security—admins can check the list against access logs, or program an intrusion detection system to sound the alarm when it sees traffic from a suspect address. But that assumes that the list is good: carefully culled, and surrounded with enough context that administrators know what to do when they get a hit.

The DHS list is none of these things, as Lee, founder of the cyber security firm Dragos, discovered when he ran the list against a stored cache of known clean traffic his company keeps around for testing. The results stunned him. “We had thousands of hits,” he says. “We had an extraordinary high amount of false positives on this dataset… Six of them were Yahoo e-mail servers.”

It turns out that some, perhaps most, of the watchlisted addresses have a decidedly weak connection to the Kremlin, if any. In addition to the Yahoo servers, about 44 percent of the addresses are exit nodes in the Tor anonymity network, The Intercept’s Micah Lee reported Wednesday. Tor is free software used primarily for anonymous web browsing. Russian hackers use Tor, but so do plenty of other people.

“If you just create a list of all the IP addresses that could deliver you a virus or an attack, Tor exit nodes belong there—that’s true,” says security expert and blogger Robert Graham. “But it’s not useful. If it’s Yahoo, it’s not useful. It’s not something that you can blacklist or watchlist.” Yahoo servers, the Tor network, and other targets of the DHS list generate reams of legitimate traffic, and an alarm system that’s always ringing is no alarm system at all.

The consequences of the over inclusive list became apparent last week, when a Vermont utility company, Burlington Electric Department, followed DHS’s advice and added the addresses to its network monitoring setup. It got an alert within a day. The utility called the feds, and The Washington Post soon broke the distressing news that “Russian hackers penetrated [the] U.S. electricity grid through a utility in Vermont.”

The story was wrong. Not only was the laptop in question isolated from the utility’s control systems, the IP address that triggered the alert wasn’t dangerous after all: It was one of the Yahoo servers on the DHS list, and the alert had been generated by a Burlington Electric employee checking email. The Post article was later corrected, but not before Vermont Senator Patrick Leahy issued a statement condemning the putative Russian attack.

The incident illustrates why the DHS watchlist—with a high false-positive rate, and no explanation of why a particular address made the list—is useless to network administrators already fighting “alert fatigue,” says Lee. “When they alert you, you have no context, you don’t know what to do,” he says. “Your only course of action then is to call the government.”

The allegations against Trump couldn’t be substantiated by any news organization—including The Daily Beast—after months of investigation, so that’s why we resisted publishing them, even after CNN reported on their existence Tuesday evening.

Claiming the allegations were newsworthy because they are “circulated at the highest levels of the U.S. government” gives anyone in power permission to slime his opponents, anonymously, through the press. CNN did it the right way by reporting on the dossier’s existence and doubts about its veracity, without exposing specific allegations.

We have seen what happens when claims are raised to the level of facts, without vetting, because they are touted by the powerful: The weak are destroyed.

Senator Joe McCarthy did this to great effect while he hunted imaginary communists everywhere from the U.S. Army to CBS News. At his side was attorney Roy Cohn, who became the Trump family consigliere and taught young Donald how to fight, with the admonition to “never apologize, always attack.”

…we are witnessing the Military Industrial Complex stepping in and attempting to subvert the President. This is unprecedented and major corporate news organisations simply repeating false claims play right into Trump’s ‘Fake News’ narrative.

More from the Intercept…

It is not hard to understand why the CIA preferred Clinton over Trump. Clinton was critical of Obama for restraining the CIA’s proxy war in Syria and was eager to expand that war, while Trump denounced it. Clinton clearly wanted a harder line than Obama took against the CIA’s long-standing foes in Moscow, while Trump wanted improved relations and greater cooperation. In general, Clinton defended and intended to extend the decadeslong international military order on which the CIA and Pentagon’s preeminence depends, while Trump — through a still-uncertain mix of instability and extremist conviction — posed a threat to it.

Whatever one’s views are on those debates, it is the democratic framework — the presidential election, the confirmation process, congressional leaders, judicial proceedings, citizen activism and protest, civil disobedience — that should determine how they are resolved. All of those policy disputes were debated out in the open; the public heard them; and Trump won. Nobody should crave the rule of Deep State overlords.

Yet craving Deep State rule is exactly what prominent Democratic operatives and media figures are doing. Any doubt about that is now dispelled. Just last week, Chuck Schumer issued a warning to Trump, telling Rachel Maddow that Trump was being “really dumb” by challenging the unelected intelligence community because of all the ways they possess to destroy those who dare to stand up to them.

And last night, many Democrats openly embraced and celebrated what was, so plainly, an attempt by the Deep State to sabotage an elected official who had defied it: ironically, its own form of blackmail.

…in our rage against Trump, progressives and the Left are unintentionally helping the Military Industrial Complex by jumping onto unsubstantiated smears.

Allegation & counter allegation in real time is creating a hyper reality where only a tiny fraction of the electorate ever know what is true.