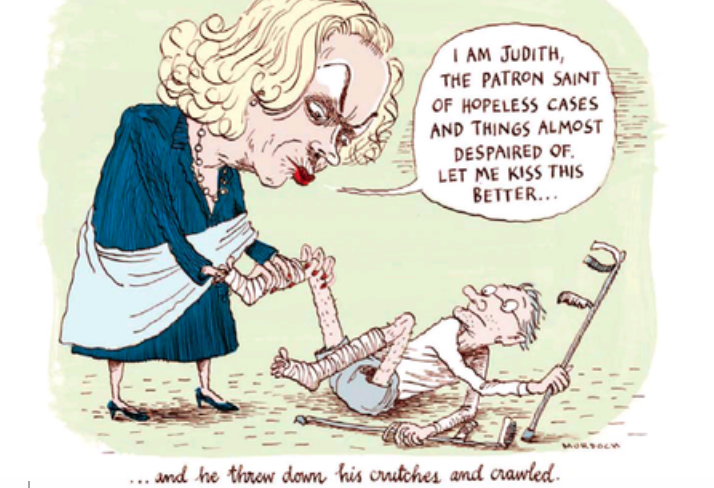 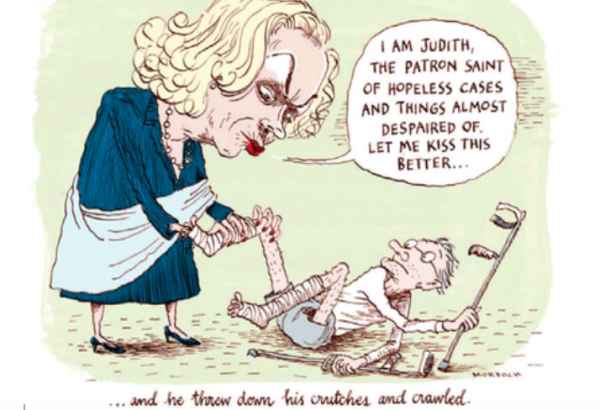 A year ago, the force that is Judith Collins was looming upon us like the sort of saw-toothed smile with a fin on top you might see in a crashing wave just before it breaks. She’d come howling back from the political wilderness to find herself once again promoted back to Cabinet. Two weeks ago, she was in (upset) contention for the National Party’s top job – and the leadership of the nation.

Today, by contrast, she languishes (relatively speaking) in low-profile portfolios (although not quite out *just* yet); and with a hefty demotion to number 16 on her party’s list. One of the highest-profile casualties of Bill English’s first stamping of authority upon the National Government’s Cabinet.

So what was her crime? It’s too easy to say that, in the tradition of Shakespeare’s Julius Caesar, that it was simply because she was “ambitious”. Jonathan Coleman (despite suffering a so-minor-as-to-be-almost-purely-cosmetic demotion) still has his Health and Sport and Recreation portfolios (although some might view the Health area as being a sort of shackled-punishment of responsibility and negative press, itself – it is, after all, an effective exercise in telling people the government’s too miserly to bother properly helping them out). And in any case – what politician doesn’t, on some level or other, harbour at least *some* pretensions to ambition and greater office. It would almost be a character flaw or personality defect if they didn’t.

Instead, Collins’ sin is a decidedly more intractable one. She has become a “problem”.

And, (regrettably or otherwise) not one with an obvious, easy “solution”.

She’s far too popular for the National Party to just simply get rid of her – as they did with other figures who’ve caused issues (consider Katrina Shanks in Ohariu). And yet their previous efforts at marginalizing her through demotion to the back benches only caused further issues.

In specia, because she stubbornly refused to truly become “irrelevant”, no matter what they did to her. Placed among what amounts to an “outgroup” inside National’s Parliamentary Wing (i.e. the disgruntled-and-passed-over backbenchers who’re often bored with rather little to do other than constituency work and putting forward bills to track down people’s luggage), she found herself in a leadership position. The fear presumably was that she’d have turned that into some sort of simmering back-bench revolt against the leadership if left to fester there for too much longer. Further, she used the relative freedom a Backbencher has to speak their mind – to criticize (obliquely) her own Government. It may have won her few friends in the Upper Echelons, but her points found easy purchase amidst the lower-middle class voters whose prejudices and proclivities National had seemingly passed over in recent policy.

In short, the National Party found itself dealing with a dangerous outsider who appeared to be (rather successfully) building up a personal following both inside and outside the Party – done in no small measure using tools they themselves had given her. Neither politician will thank me for making this comparison, but one could almost say that this seemed a vaguely similar situation to that of Winston Peters in the early-1990s.

Faced with this challenge, the Nats did what they always do: they attempted to buy her off.


Shortly after her latest bout of media salience (triggered by criticizing her own Government’s perceived enthusiasm for ‘unelected Maori everything’ in both local governance and resource management), she received news that she’d been once again elevated to Cabinet – and had even been given back pretty plum portfolios where she’d previously (somewhat) excelled, in the form of Policing and Corrections.

Collins thrives in a ‘law and order’ environment for a number of reasons – it plays into her ‘strong’ image, and the issues she can raise in these portfolios chime in most strongly with the fears and priorities of those aforementioned middle-class voters (once you’ve got a piece of prosperity, one of your first thoughts is often what to do about people nicking it off you). Given the fact that her promotion was obviously supposed to be anything but a negative thing, I can only surmise that the high-ups doing the allocating figured that if they gave her pretty much what she wanted, then she’d quieten down and be a team player.

This doesn’t appear to have happened; and in addition to publicly attempting to disrupt with the specter of actual choice and democracy what was supposed to be an orderly and uncontroversial Leadership Transition inside National earlier this month, she also went out on a limb to once again criticize her own Government in the process. If there’s one thing you’re DEFINITELY not supposed to do while in Cabinet (as she still was during the leadership handover), then it’s probably that. Particularly when the specific subjectmatter of the criticisms (the perceived wastefulness of 2017’s targeted tax-cuts – and, more especially, the fact that the police being underresourced was actually National’s fault due to financing constraints; both elements of the Finance portfolio) was ultimately aimed fairly directly at the guy “supposed” to be taking over as Prime Minister at the end of things.

It probably didn’t help any that in the eyes of a good swathe of the electorate, she appeared to be largely “right” on all counts. I was quite interested to see the number of people around me who’d said things like “I don’t like Judith Collins – but I agree with what she’s saying she’d do differently if heading National” … and that’s among mostly non-National voters. No wonder her superiors are scared.

This brings us almost up to the present day.

It seems clear, now, that National’s two thus-far deployed measures of attempted “Collins-control” (or, if you like, ‘crushing’) haven’t worked. Putting her into exile only put her into a greater position to cause ‘trouble’. Bringing her back and attempting to ply her with the baubles (and tasers, and prison-block fight clubs) of office didn’t work, either – it simply added kerosene to the fire under the guise of manufacturing a more ‘controlled blaze’.

So a third course has had to be struck.

They know they can’t seriously demote her again – and they haven’t. Instead, they’ve kept her in Cabinet (with all the prestige – but also weighty chains of responsibility and Collective Cabinet convention which that implies); while also lumbering her with heavy-workload, minimum-visibility portfolios. Clearly, the idea is that the demands of managing the tax system and our energy sector will swamp her in details rather than media-attention headlines; with the high level of community engagement and required public appearances associated with Ethnic Affairs keeping her further busy somewhere far away from the limelight.

Meanwhile, the choice of now-Deputy Prime Minister Paula Bennett is obviously intended to simultaneously demonstrate that Collins’ raised-concerns in the portfolio are being taken seriously (by someone other than her, of course); and help to build up Bennett’s own ‘tough-on-things-disliked-by-the-aspirational-middle-class’ credentials. In other words, the Nats want an ‘anti-Collins’ going forward – and as ‘crushing’ as the despair is for many on benefits post-Bennett, ‘strong on law and order’ sounds far better in concert with ‘getting people off benefits’ than does the latter purely by itself.

But this being National, there are always several more angles to the play than are immediately apparent.

The Government has recently announced a major push to combat foreign multinational corporate tax avoidance. Collins can certainly do well out of this provided it’s executed properly (and her ‘tough’ persona will both play a role and benefit accordingly); or, if it all fails and falls over in a hum, then there’s certainly no harm in her taking the hit. Picking up Simon Bridges’ former Energy portfolio with its associated oil prospecting etc. issues will also give her ample opportunity to both annoy protesters, and potentially find herself covered in muck if something goes wrong there.

She thus has something of an opportunity for a long-term game of more fulsome redemption – as well as any number of (semi-deliberate) spiked pit-traps lining her way to get there. It will be interesting indeed to see in what shape she both sees out this Parliamentary Term, and positions herself toward the beginning of the next one. Particularly as I’m given to understand National folks in a position to be able to do so have straight-up told her that her continued open leadership ambitions will no longer be tolerated, and that she may be playing something of a dangerous game in continuing to bank upon her apparent ‘too big to fail’ status as protection against something similar to what happened to Sam Lotu-Iiga (or, for that matter, Winston) transpiring to her.

The message delivered by her recent demotion must have been a clear one: that no matter if one is popular enough to be powerful, powerful enough to be threatening, and too threatening to just simply be obviated, executed or ignored … this still does not protect one from one’s cherished (and, arguably, well-fitting) porfolios from being stripped away as an attempted exercise in political castration.

The other message from all of this: as in leadership contests, life and casinos … The House always wins.