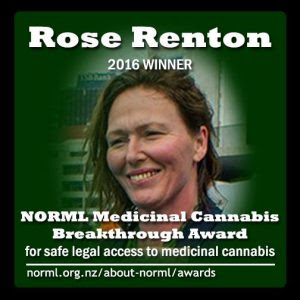 This year has seen unprecedented levels of cannabis activism nationwide, with a notable trend: women are leading New Zealand campaign for safe legal access to medicinal cannabis, and for treating cannabis as a health issue, not a crime. This is reflected in the results of NORML’s inaugural cannabis activism awards.

Much of the progress we have made over the last year can be traced back to what Rose Renton started. Rose’s son Alex Renton was the first New Zealander to use medicinal cannabis in a hospital setting. After Alex tragically passed away, Rose continued to campaign for safe legal access for all patients. This culminated in a nationwide petition recently tabled to parliament, and led Labour MP Damian O’Connor to introduce a private member’s bill for medicinal cannabis – the first ever attempt at cannabis law reform by an MP from a major party!

Rose Renton told me she was really honoured to receive the award. “I’d like to thank NZ for supporting medicinal cannabis so overwhelmingly. I’d like to see next year’s Select Health Committee listen to its people to bring access to medicinal cannabis for New Zealand inline with international movement. I believe we will achieve our goal in 2017.”

The David Reid Currie Award for a breakthrough in cannabis law, science or communication joint 2016 winners are Rebecca Reider and Sue Grey, for their work drawing attention to the exemption that allows people to enter New Zealand with one month’s supply of medicinal cannabis. Rebecca uses cannabis medicinally but was prosecuted by police. Her lawyer Sue Grey found the exemption and successfully won a discharge without conviction. Rebecca and Sue then made sure every New Zealander knew about the exemption, and to prove it Rebecca traveled to Hawaii and brought back one month’s lawfully obtained supply of medicinal cannabis. Both fronted for media interviews and did everything they could to let New Zealanders and the world know about the exemption. For that they are well deserved winners! 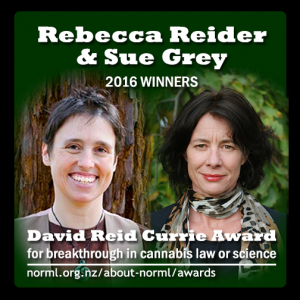 “Once I had gone through the harrowing experience of being criminally prosecuted for my medical needs, I knew I had to become an advocate to protect other cannabis users from the same fate,” Rebecca Reider told me. “As a person with health challenges, my cannabis journey this year has taken a lot of energy – so it means a lot to me to be honoured. I was so fortunate to have the brilliant Sue Grey as my attorney. I love being part of the growing tide of New Zealand women proudly speaking up for cannabis as medicine.”

NORML’s new annual cannabis activism awards are made possible thanks to a generous bequest from David Currie, a Wellington scientist, author of Marijuana Facts & The Case for Legalisation, and founder of NORML in New Zealand in 1980, who passed away earlier this year. At our recent Annual General Meeting we resolved to create an annual award in Dave’s name of $1000 for a breakthrough in cannabis law, science or communication, and to also create an annual award of $1000 for achievements in the field of medicinal cannabis or a breakthrough in furthering safe legal access for New Zealand patients. The awards will be made annually, with the public encouraged to nominate people or organisations and the winners announced at NORML’s annual conference.

With so much going on right now, there were many worthy nominees accepted for consideration:

If there is one name conspicuously absent from the list of nominees, it is Helen Kelly. We had hoped to name the medicinal cannabis award after Helen, to honour her work in the field and recognise the inspiration she gave to so many and the way she changed the conversation here in NZ. However Helen’s family have, understandably, said our request was too soon and invited us to meet with them next year. That’s fair enough – we respect their wishes and look forward to meeting when the time is right.

In the meantime, on behalf of NORML NZ Inc, I would like to extend our congratulations and sincere thanks to the winners, everyone who was nominated, and all the unsung heroes of the cannabis law reform movement. There are many, which is a good sign of the strong movement we have right now.