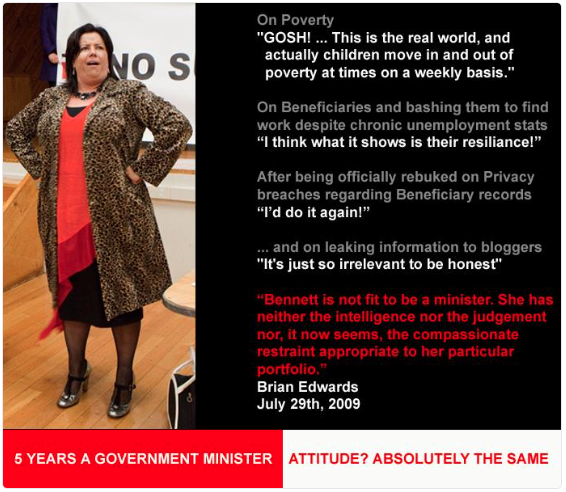 So MSD have been forcing investigation staff to get at least one prosecution a month, often for the non-crime of ‘relationship fraud’.  They have quotas to recover at least $30,000 in debt per month!

Legions of women just barely surviving financially have been prosecuted, often sent to jail, even when they have had young children. Some have become suicidal, others have had their lives and those of their children ruined.

CPAG has written endlessly about this, as well there is  Kathryn’s story. Surely, good relationships should be encouraged and sole parents who try to repartner be free from persecution?

Being a sole parent is sheer hard work, lonely and totally undervalued.  While every conceivable support should be wrapped around our vulnerable young mothers who are bringing up children on their own, instead, society demonises them and denies them enough to live on.   Harmful policies, relic of the 19th century trap them in a miserable untenable depressing existence where neither they nor their children thrive.  The children disproportionately suffer third world diseases as the 2016 Child Poverty Monitor shows.  The schools they attend are also grossly under-supported.

Any whiff of sole parents getting any support, emotional or financial from anyone especially a ‘man’ is treated like a crime.

The absurdity is that even if the man has hardly enough money to support himself  let alone her and her children, she can be  deemed to be in ‘a relationship’ with him. MSD can determine when that starts and deny her the benefit, accuse her of fraud and demand full repayment even when a jail term is served.

Imagine the outcry if we did not have tax on a purely individual basis so that two people flatting together have to pay more tax on their incomes if the IRD determines they are ‘in a relationship’. Why do we not have an outcry for what we do in the welfare system?

Suppose a sole parent on $325 a week is deemed by WINZ to be in a relationship with her flat mate (after being dobbed in by nosey neighbours who think, horrors of horrors, she might be sleeping with him).  Say he is on the single rate of jobseekers ($210 per week). They are likely to be barely surviving but as a couple ‘living in the nature of marriage’ they would be entitled to only the married rate of benefit, which is about $140 a week less.

Moreover if either of them earn extra they can have only $80 between them before each of their married rate of benefit is reduced by 35% for an extra dollar earned.   So they are trapped in poverty.

Why are ‘married’ benefits lower? The logic is very flawed.  Married people are supposed to enjoy additional economies of scale.  Instead of encouraging this, essentially MSD says “We cannot have that, any advantage must be taken away!”

So how does the MSD justify its 19th century policy?  In the latest paper for the retirement policy review 2016 they say

“Couples living together in a married, civil union or de facto relationship are paid less than double the single rate because it is considered that they can take advantage of certain economies of scale that individuals in shared accommodation cannot. “

Here’s the best they can come up with.  They say a couple could

Please, even by today’s low standards of policy making, surely a policy that entraps so many struggling sole parents is completely unacceptable?