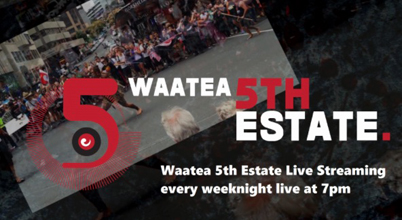 After one hell of a 7 month season where we put together an amazing show each weeknight at 7pm, Waatea 5th Estate has been turned down by NZ on Air for funding.

I want to thank Willie Jackson and the team at Waatea who managed to put together an amazing current affairs show each night that managed to out trend Story and Seven Sharp each week on Twitter and generated a huge audience of NZers who wanted intelligent current affairs and not the mindless pap served up on TVNZ and TV3.

Waatea 5th Estate did more public service broadcasting in its 7 months on air than Story and Seven Sharp combined.

It is depressing to think that we will see a 2017 election with the same current affairs gatekeepers doing the same idiocy dressed up as public debate.