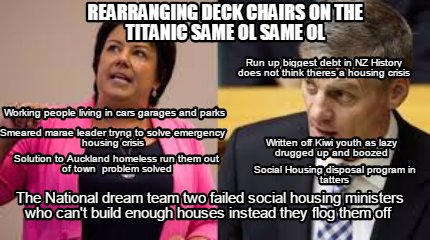 Are you trying to be funny Paula?

Kiwi’s forced to live in cars say you are wrong.

Kiwi’s forced to live in garages say you are wrong.

State tenants who are being kicked out as your privatise social housing say you are wrong.

An entire generation who have been locked out of home ownership, tell you you are wrong.

State tenants forced to live in freezing cold houses say you are wrong.

You are a lying, smug fool who has traded on her solo parenthood to then deprive anyone else of the same assistance. You are out of your depth on social housing, you are out of your depth as a Cabinet Minister and your out of depth with the true enormity of misery your polices have generated. To bare faced lie to the nation that you’ve ‘turned around’ and ‘fixed’ the very problems that your policies exacerbate is a lie too far.

It’s time we had a snap election and put these lying rats to the ballot box.

You don’t have John Key to vacantly smile and wave to obscure the true awfulness of your policies  any longer National, let’s test how many NZers are willing to follow you now shall we?