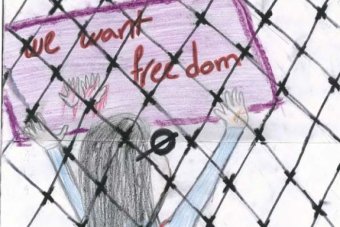 We think of human rights abuses occurring in far off places. But 4000 km to the North is a country that has been taken over as a prison. There are 1200 people held against their will. They were sent there for six months to processing their applications for refugee status. Three years later, they are trapped on Nauru in despair.

Anna Neistat is the Research Director of Amnesty International. She has travelled around the world to some of the most dangerous conflict zones around the world – places where human rights are an alien concept. She undertook an investigation into refugees trapped in Nauru and was shocked: “Having worked in most of the world’s conflict zones over the last 15 years, I thought I had learned enough about suffering, injustice and despair. But what I saw and heard on Nauru will haunt me forever.”

She was able to get insights to conditions that most  of us can’t imagine. As she said at a recent meeting in Parliament, she has never seen such mental trauma in a war zone. Adults and youth were held in limbo with no clarity about their future, suffering from physical, mental, emotional and sexual abuse. She heard from refugees who have attempted suicide, those committing self harm and many suffering from untreated illnesses and conditions such as diabetes. There have been hunger strikes and riots, but conditions in Nauru remain dire.

Their crime? They have fled war, torture and abusive governments. They braved arduous and dangerous journeys in search of a safe haven. Their mistake was that they wanted to go to Australia to build a better life for themselves and their families. Many of the detainees were sent back to dangerous conditions in Syria, Iraq, Afghanistan and other conflicts. The asylum seekers accepted as legitimate refugees are now trapped on Nauru.

How is the Australian government able to get away with such gross human rights abuses? Anna Neistat says she has never seen such a sustained – and successful – effort to hide abuse from the outside world. Nauru charges journalists A$8,000 to apply for a visa, and the costs are non-refundable. Almost all applications are declined. Staff working in Nauru have contracts requiring secrecy. Under Australian law, service providers face two years in jail if they reveal anything about the situation in Nauru

Surely New Zealand should use our political influence to demand respect for human rights, but that’s not what this government does. Their foreign policy has been reduced to asking for free trade agreements. And when it gets difficult, as in the case of McCully’s sheep deal with Saudi Arabia, a payment is made. In most cases, paying a wealthy individual $11.5 million to get an agreement with a government would be called a bribe, but not according to New Zealand’s Attorney-General.

This government doesn’t care about human rights, at home or abroad. Nor does Australia’s government. Speak out to support refugees in Nauru.