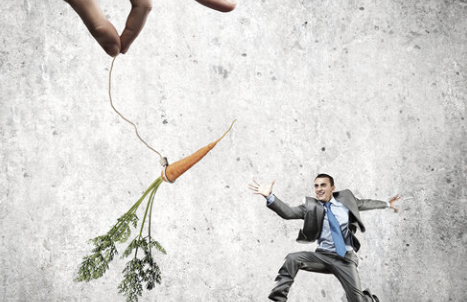 In troubled times, we are community

On 14 October, eight hours after two massive 7.8 earthquakes simultaneously rocked the entire country, our Dear Leader John Key made an impassioned (for him, it was impassioned) appeal to the people of Aotearoa on Radio NZ’s ‘Morning Report‘;

It was  an appeal to a sense of community that is rarely made by right-wing governments or their leaders. It was a tacit acknowledgement that No Man or Woman is an Island that that only by acting collectively can human beings survive  and improve their own circumstances and for their children.

On 21 November, Key announced that tax cuts were once again “on the table” and Little Leader/Finance Minister, Bill English confirmed it.

With a statement that was more convoluted than usual, Key said;

Tax could be effective higher up the income scale, but lower down it was not that effective because base rates were low or it was very expensive.

Over the fullness of time we’ll have to see whether we’ve got much capacity to move.

Making sure they can keep a little more of what they earn or get a little bit more back through a variety of mechanisms is always something we can consider. It could be a mix, yes.

In the end it’s about equity for New Zealanders and about .. having a rise in their standard of living, and there’s a number of ways you could deliver that.”

Key has once again dangled a billion-dollar carrot in front of New Zealanders as the country heads towards next year’s election.

During the 2008 General Election,  as the Global Financial Crisis was impacting on our own economy, Key was promising tax cuts. In May 2008, he said;

Questioned on whether National’s tax cuts programme of 2005 was credible today given the different economic circumstances, Mr Key said: “Well, I think it is.”

“I believe that an ongoing programme of personal tax cuts that delivers the sort of magnitude that we’ve had in the past is potentially possible.

By October 2008, as NZ Inc’s economic circumstances deteriorated, Treasury issued dire warnings that should have mitigated against any notions of affordable tax-cuts;

John Key has defended his party’s planned program of tax cuts, after Treasury numbers released today showed the economic outlook has deteriorated badly since the May budget. The numbers have seen Treasury reducing its revenue forecasts and increasing its predictions of costs such as benefits. Cash deficits – the bottom line after all infrastructure funding and payments to the New Zealand Superannuation Fund are made – is predicted to blow out from around $3 billion a year to around $6 billion a year.

Predictably, government debt – which had been paid down by the Clark-Cullen government – ballooned as the recession hit New Zealand’s economy and tax revenue fell;

Key himself estimated tax cuts to be worth between $3  or $4 billion.

Nature intervenes in National’s “cunning plan” for a Fourth Term

According to Dear Leader Key, estimates for the re-build of earthquake damage in and around Kaikoura; State Highway One, and the rest of the South Island  is likely to be at least “a couple of billion dollars“.

Finance Minister Bill English has hinted the cost may be much more;

“The combination of significant infrastructure damage in Wellington, obvious damage in Kaikoura – all roading and rail issues – this is going to add up to something fairly significant. We also know that those estimates change over time.”

No wonder Labour leader Andrew Little was less than impressed at tax cuts being mooted. Echoing Michael Cullen from eight years ago, he condemned the irresponsible nature of Key’s proposal;

“Well this is crazy stuff, I mean in addition to a government having $63 billion worth of debt it is yet to start repaying, and you’ve got a billion dollars extra each year just in the cost of superannuation.

Now we have another major civic disaster that is going to cost in terms of repairs. I do not see how John Key can say tax cuts are justified in the present circumstances.”

On top of which, English announced last month that National was planning to spend over $2.5 billion on new prison beds. He questioned whether tax cuts were affordable with such looming expenditure;

Finance Minister Bill English has warned an announcement today of plans for an extra 1,800 prison beds will reduce the room for the Government to consider tax cuts before next year’s election.

English told reporters in Parliament the extra beds would cost NZ$1 billion to build and an extra NZ$1.5 billion to run over the next five or six years.

“It will have an impact because it is a very large spend and, two or three years years ago, we probably thought this could be avoidable,” English said when asked if the extra spending would make it harder for the Government to unveil tax cuts and other spending before the next election.

“It’s all part of this rachetting up of tougher sentences, tighter remand conditions, less bail and taking less risk with people who commit serious offenses,” he added.

Asked if that meant there would be less room for tax cuts, he said: “I wouldn’t want to judge that because it is a bit early, but certainly spending this kind of money on prison capacity is going to reduce other options.”

The inevitable cost of tax-cuts

As billions more is wasted on prisons, money spent on health, education, housing, and other social services is being frozen; cut back, or not keeping pace with inflation.

This has resulted in appalling cuts to services such as recently experienced by  96-year-old Horowhenua woman, Trixie Cottingham;

Other social services have also been wound back – as previously reported by this blogger;

Cuts to the Health budget have resulted in wholly predictable – and preventable – negative outcomes; 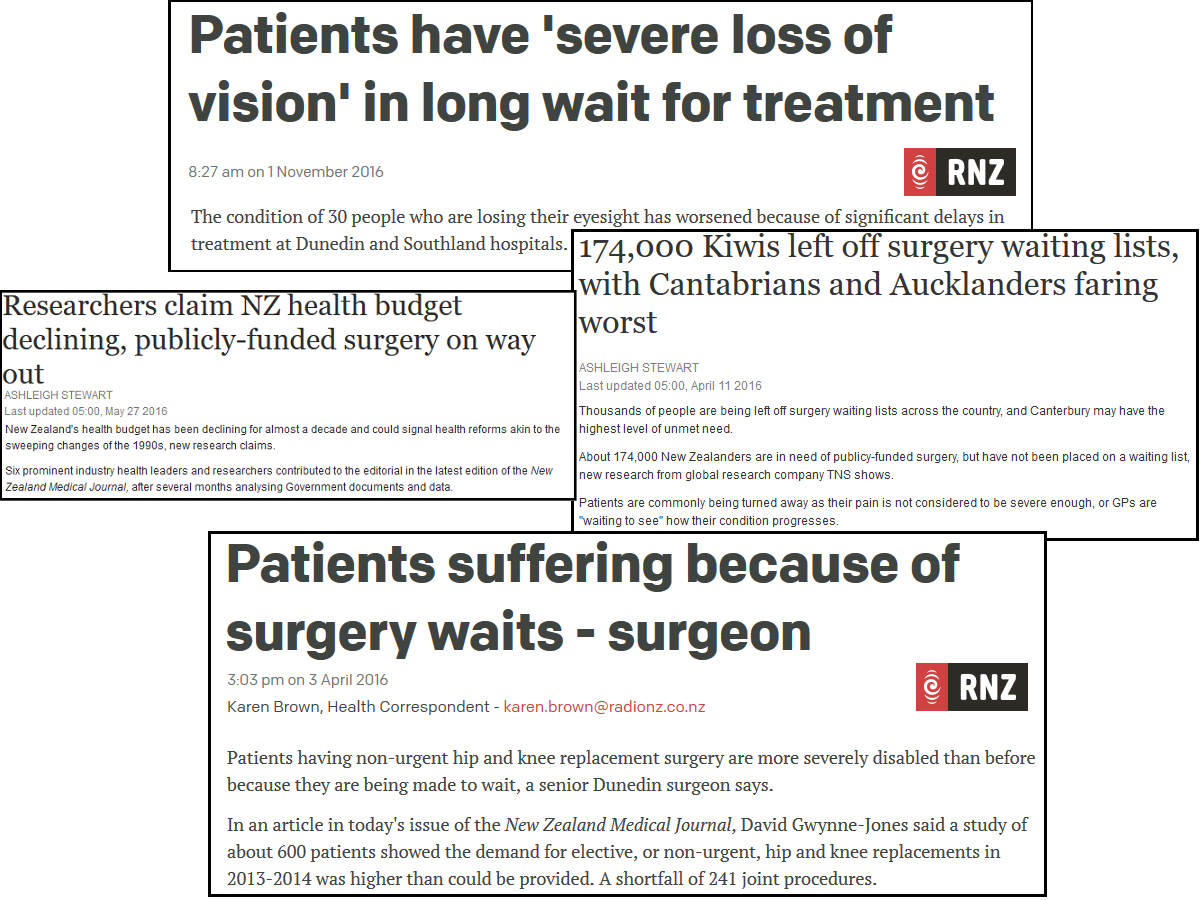 A critic of National’s under-funding of the health system, Phil Bagshaw, pointed out the covert agenda behind the cuts;

Bagshaw believed the Government was moving away from publicly-funded healthcare, and beginning to favour a model that meant everyone had to pay for their own.

“It’s very dangerous. If this continues we will slide into an American-style healthcare system.”

As the public healthcare system faces reduction in funding – more and New Zealanders will be forced into taking up  health insurance. In effect, National is covertly shifting the cost of healthcare from public to private,  funding the public/private ‘switch’ through personal tax-cuts.

Tax dollars have previously been allocated to social services such as Education or Health. By implementing tax cuts, those “Health Dollars” become “Discretionary Dollars”; Public Services for Citizens becomes Private Choice for Consumers.

And we all know how “well” that model has worked out in the United States;

(Yet another) Broken promise by Key

But equally important is that, in promising to spend the government surplus on tax-cuts, Dear Leader Key has broken yet another of his promises to the people of New Zealand.

In July 2009, National suspended all contribution to the NZ Superannuation Fund. At the time  Bill English explained;

“The Government is committed to maintaining National Superannuation entitlements at 66 per cent of the average wage, to be paid from age 65.

The suspension of automatic contributions will remain until there are budget surpluses sufficient to fund contributions. Under current projections, the Government is not expected to have sufficient surpluses for the next 11 years.

Once surpluses sufficient to cover automatic contributions return, the Government intends to contribute the amount required by the Fund formula.”

“We’re managing government spending carefully, the economy is improving a bit faster than we expected, and that means it’s six years instead of 10 years until we start making contributions to the fund. If the economy picks up a bit faster again, we’ll get to that point sooner.”

“Once we’re back to running healthy surpluses, we’ll be able to auto-enrol workers who are not members of KiwiSaver, pay down debt and resume contributions to the Super Fund.”

“The Government’s target is to return to surplus by 2014-15 so that we will then have choices about repaying debt, resuming contributions to the New Zealand Superannuation Fund, or targeting more investment in priority public services.”

“It remains our intention that contributions will resume once net debt has reduced to 20 percent of GDP, which is forecast for 2020.”

“… In this Budget we will have a paper-thin surplus , I mean we’ll just have a surplus but that’s the beginning of a series of surpluses and that means we have choices. And there’s a lot of choices. We’ve got the New Zealand Super Fund to resume contributions, an auto-enrolment for KiwiSaver, paying off debt more quickly, something for households to help them along. Those are choices that New Zealand fortunately will have if we have a growing economy and we stick to being pretty careful about our spending.”

In 2015, Key and English issued a joint  statement saying;

“Through Budget 2015, the National-led Government will…

Reduce government debt to less than 20 per cent of GDP by 2020/21 when we can resume contributions to the NZ Super Fund.”

In October this year, English said;

“There has not been any broken commitment regarding the Superannuation Fund. We have said for some time that when the Government returns to a sufficient budget surplus and can contribute genuine savings rather than borrowing, National will resume contributions to the New Zealand Superannuation Fund. The straightforward issue is that even when the Government shows surpluses under the operating balance before gains and losses measure, it does not always have cash surpluses until those accounting surpluses get reasonably big.

I remember that Sunday in 2009 in vivid detail, in fact, and constantly go back to it. The Government has outlined its position many, many times since 2009, and when there are sufficient surpluses and when we have debt down to the levels we think are prudent, which is 20 percent of GDP by 2020, then we will resume contributions, which we would like to do.”

In every year since National ceased contributing to the NZ Super (“Cullen”) Fund, both Key and English have reiterated their committment to resume payments when government books returned to surplus.

By hinting at tax cuts instead, Key and English have broken their promises, made over a seven year period.

Even their “qualifyer” of resuming contributions “when we have debt down to the levels we think are prudent, which is 20 percent of GDP by 2020” becomes untenable with their hints of an election-year tax-cut bribe.

By cutting taxes instead of paying down debt, resuming contributions to the NZ Super Fund is pushed further out into the dim, distant future.

The very suggestion of tax cuts is another potential broken promise.  What’s one more to add to his growing list of promises not kept?

After all, there is an election to be fought next year.

Since National has not thought twice at under-funding the Health Budget, it certainly does not seem troubled at using tax-cuts as an election bribe, and undermining this country’s future superannuation savings-fund for selfish political gain.

NZ Treasury:  Financial Statements of the Government of New Zealand for the Year Ended 30 June 2010 – Debt

NZ Treasury:  Financial Statements of the Government of New Zealand for the Year Ended 30 June 2016

Fairfax media: Compulsory super ‘would be worth $278 billion’

The Standard: The eternal tax-cut mirage