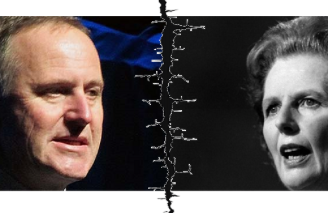 Twenty-nine years later, as much of New Zealand is ravaged by a 7.5 earthquake, John Key makes an appeal to the people of Aotearoa on Radio NZ’s ‘Morning Report‘;

Far from decrying Key’s sound advice, I would applaud him for giving it at a time when the country is rattled by ongoing,  severe,  seismic activity.

But it illustrates one fact with crystal-clarity;  Thatcher was wrong. There is such a thing as ‘society’.  We are our Brothers and Sisters Keepers; and functioning solely and purely  for our own Individualistic and immediate Familial benefit is not to our  advantage.

For without it, we are very much alone and left vulnerable to the immense, implacable, forces of nature.

Because at the end of the day, when this country is hit by earthquakes that tear apart our roads, bridges, offices, community facilities, factories, ports, schools, and our own homes – I don’t see the “Invisible Hand of the Free Market” coming to our assistance, “invisible” or not.

Only people, working collectively for the greater good, can achieve mutual support – quite often for no personal benefit or gain.

Defenders of the neo-liberal/free market/globalisation ideology should stop and consider; we cannot have the Primacy of the Individual in good times, and then seek sanctuary within the strength of society in bad. People acting together as a community is either within us all the time, or not at all.

It is time for the leader of New Zealand’s free-market, pro-neo-liberal, political party to understand this simple truth.