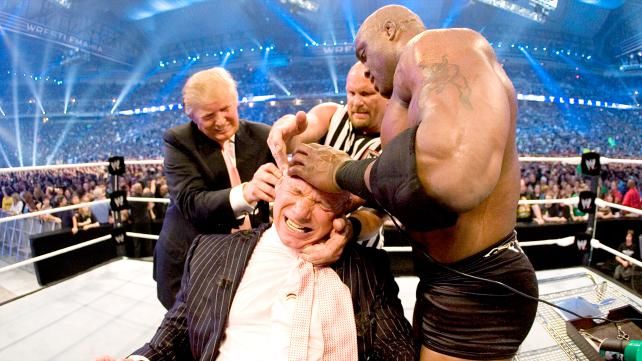 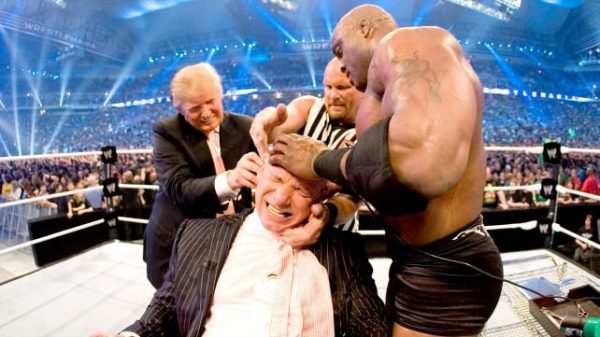 Dubbed as “the show of shows” and “the greatest sport event in the world”, WrestleMania is based entirely on showmanship and fakery.

A sexy and violent version of ham theatre, WrestleMania gives its fans, heroes to love and villains to hate. Highly scripted and with pre-determined results, WrestleMania is all about drama, spectacle, and crucially about suspended disbelief- that is the willingness of audiences to sacrifice realism and logic for the sake of entertainment.

The storylines are normally about treachery and old rivalries and contain characters like the evil communist, the effeminate narcissist and the pretend patriot, etc.

Donald Trump is the 2013 WWE Hall of Fame inductee and one of WrestleMania’s biggest supporters since 1980s.

In 2007, Trump’s own WrestleMania performance before and during a match billed as “The Battle of the Billionaires” caused a media frenzy in front of a then record-selling 80,000 fans.

Raucous crowds held up placards and cheered loudly as the hubris Trump, standing in the middle of the ring, sneered, mocked and belittled his opponent; it was all scripted fakery of course.

Watching Trump’s performance during the 2007 WrestleMania, I couldn’t help but think of its uncanny similarities to Trump’s style of campaigning during the 2016 US elections.

Like good WrestleMania audiences, the supporters at Trump’s rallies played their part in creating drama and hype; they chanted “we hate Muslims, we hate blacks” and “lock her up, lock her up”.

Trump played his part by being outrageous and shocking: he promised to build a giant wall, to throw out illegal immigrants and to stop Muslims from entering United States of America.

The media and political establishment became the main villains, while Trump posited himself as the new anti-establishment hero.

The media gobbled up the fake garbage willingly and brought in massive television viewers that gave TrumpMania its much-needed oxygen.

Unlike WrestleMania’s pay-per-view format, TrumpMania was free to watch and audiences around America, and the wider world, loved the show.

Meanwhile, another decent anti-establishment movement went largely unnoticed because its protagonist, Bernie Sanders, refused to give in to fakery and sensationalism and preferred to deal with reality and decency.

This is not to say that Bernie’s movement was not compelling or without its own dramas.

The presidential campaign of Vermont Senator Bernie Sanders raised $234.3 million dollars from small individual donations and energized young voters to flock to the Democratic candidate’s side.

They were other highlights and dramas too.

For instance, no pre-scripted storyline could have ever matched the almost holy moment a bird landed on Bernie’s podium during a campaign rally in Portland, Oregon.

The crowd went wild and cheered as Bernie shook his head and said while smiling “I think there maybe some symbolism here”, “ I know it doesn’t look like it but that bird was really a dove asking us for world peace”, “no more war”.

In my own Persian culture, legend has it that, at times when a suitable king cannot be found, a bird called Homa will land on a person’s shoulder to signify his suitability to become the next king.

Writers, artists and journalists all failed to capitalize on the story behind a modern Western version of Homa; to captivate their audiences by telling them an inspirational story of Bernie and the bird.

The media blackout of Sanders’ campaign continued while Trump dominated the television screens.

A study by the Harvard Kennedy School’s Shorenstein Center confirmed that Sanders received far less media exposure than any other major political candidate in the presidential race.  The study concluded that the media blackout badly hurt Sanders’ campaign.

But the success of Sanders’ movement did not go unnoticed by Donald Trump who leveraged on its anti-elitist and anti-establishment language to draw Sanders’ supporters to his side.

A Trump ad released a few days before the election is a clear example of this.

Capitalizing on the awareness created by the work of the Occupy Wall Street and Sanders’ movement, the ad lambasted the global power structure that Trump said, had “robbed our working class, stripped our country of its wealth, and put that money into the pockets of a handful of large corporations and political entities”.

Many would be Sanders’ supporters held their noses and voted for Trump as a Brexit-style expression of their disdain for both the media and political establishments.

As Trump’s campaign gathered momentum, the panic at newsrooms around the world came too late. In fact, as the media’s attacks on Trump intensified so did people’s suspicion of the media’s true motives.

The almost unanimous rejection of Donald Trump by the media served the opposite purpose by giving weight to Trump’s laments about media corruption.

Journalists failed to understand the TrumpMania effect and the suspended disbelief that fueled it.

This year, according to WWE, WrestleMania set multiple records for the company; including grossing $17.3 million and an official attendance record of 101,763.

According to Forbes, WWE stock jumped 5% after Trump won the presidency.

Evidently, there is a healthy appetite for entertainment in both sport and politics. Remember how Boris Johnston’s buffoonish and entertaining character contributed to Brexit’s success.

What surprised me the most about the US election night was not the final result but my 14-year’s obsessive interest in it; such is the TrumpMania’s global appeal and the pulling power of political entertainment .

One thing is for sure: the path to political entertainment has been paved.

It appears the demise of literacy and the rise of spectacle is here to stay.