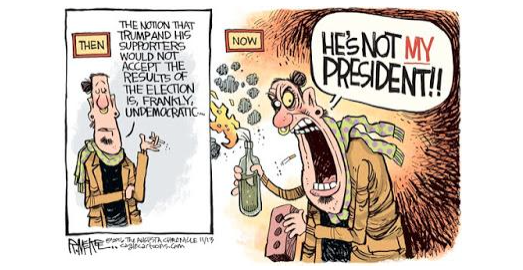 I’m now old enough to properly remember three Presidents (Bush, Obama, and Trump. I have vague, hazy memories of Bill Clinton – but that’s mostly just bombing Yugoslavia and a sex scandal). And you know what I’ve realized? There’s some remarkable consistencies in how EVERY SINGLE ONE OF THEM gets reacted to in office.

Each one of these men has been called Hitler. Every one of them’s been talked about as some sort of irascible warmonger who’s inching us closer to the broad-spanning extinction of the Human Race. They were all #NotMyPresident. All of these Presidencies either have or will preside over a fundamentally racist justice system, and repugnant foreign & trade policies. The only main difference between Trump advocating for targeted killings of terrorists’ families … and Obama’s drone-strike program, or Bush’s invade-an-entire-country program, is that Trump was straight-up and honest about what he was trying to achieve (and also isn’t talking about ‘regime change’ enforced at bayonet-point) – a theme which presumably applies to pretty much every other area of core contention that most people have against a Trump Presidency based upon what he’s said on the campaign trail.

Hell, even the broad, sweeping reactions to a President people don’t like are overtly similar. For the last few days, we’ve had Californians talking about secession from the Union – and, more darkly, outraged arch-liberals suggesting somebody ought to go John Hinckley and assassinate Trump (apparently heedless of the fact that the man who’d replace him as President – Mike Pence – is inarguably worse on EVERY front, being an anti-gay and pro-TPPA classic modern Republican). This is nothing new. Under Obama, it was Texas that was allegedly going to secede, and Tea Partiers and militiamen talking about assassination. Under Bush … well, it was the “People’s Republic of Vermont” [maybe THEY’D have had the good sense to make Bernie Sanders President], and any number of fantasizing books, comics, movies and polemic pieces arguing that the world’d be better off with one less President Bush.

Well, for one thing, this much outrage, this quickly is pretty striking. I don’t even think after Bush Jr. got re-elected in 2004 (amidst allegations of *actual stealing of the election* via rigged e-voting machines, systematic disenfranchisement etc.) that there was seemingly this much heat on the street. We’re less than FOUR DAYS into President-Elect Donald Trump, and it already looks from afar as if America’s starting to unravel (it isn’t – starting, that is – but these things often look so much more dramatic from far away).

There’s also probably an easy distinction to be made between that outrage and this. In the former case, there was something really big, really abhorrent and really reified which that President had *already* done (namely, invading a foreign country under a false pretext while top officials *lied* about it) to galvanize public support for his popular opposition.

In this case, nothing like that has yet eventuated.

The only thing people can seem to object to is the mere fact of his election itself. (something which, to be honest – albeit from entirely different reasons – was pretty much what the Tea Party people were doing in 2008 with Obama)

There is, of course, a counter-argument – that this Presidential outcome is so singularly sui-generis in sadness and in suicidality that some radical actions are more called for now than they were previously. In that light, I don’t think I’ve ever before seen outright demands for the Electoral College *not* to represent the votes of the people of the states before in order to pick and anoint a preferred candidate.

But in any case, I can’t help but wonder whether the scale and the vitriol of the liberal/leftist/democratic-malcontent response to the looming and increasingly corporeal specter of President Trump is actually motivated by this.

Or, instead, whether so many are so bitter precisely because this is a decidedly unexpected turn of events; and because they were all geared up to think that they, Clinton, “had it in the bag” – and that we’d all be ganging up to ridicule and vituperate those silly Trump supporters with their Orange-Meme Nominee for being stupid enough to lose.

Well, we sure aren’t laughing now.

And because we can’t deal with it – whether rightly or wrongly – we’re lashing out in anger and in protest (at just about anybody who fits the bill of “might have helped Trump get elected”, into the bargain).

It will certainly be interesting to see whether this wave of semi-popular discontent simmers down or sizzles up with increasing verbosity over the coming days and weeks.

But one thing’s for sure: no matter whom the next President is – and whether we see them first in 2020 or 2024 … they’ll presumably face EXACTLY the same wave of Reductio-Ad-Godwinning, street-protests, and pre-emptive criticisms as the last one.

Truly, as that Bible verse goes, “there is nothing new under the sun”.