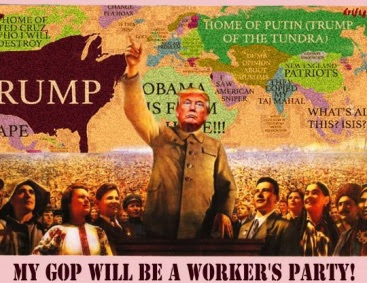 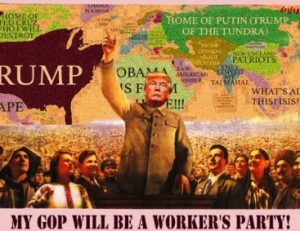 [Author’s Note: This piece originally appeared as the sixteenth installment of my Sex, Drugs & Electoral Rolls column for Craccum Magazine, in early August. However, events unfolding later this week – and their potential ramifications – have once more pushed this topic to the forefront of my mind. Also, I noted with some interest and amusement that noted postmodern ‘superstar’ political philosopher Slavoj Zizek appeared to reason himself to pretty much the same conclusion last week in his ‘endorsement’ of Trump. I’ve therefore chosen to republish my column here for a broader audience.]

At the time of writing, we’ve just had a week of absolute and utter chaos at each and both of the Republican and Democratic National Conventions. Predictably, this has lead to the usual profusion of armchair pundits and paid political “experts” pontificating en-masse as to what’s about to happen – and, perhaps more importantly, what should happen next in the long run. Obviously, Trump’s sensational and salacious dangling of the threat of an onslaught of Russian hackers in the general direction of Hillary Clinton makes for stimulating reading – but this is a sideshow, and we all know it.

The REAL issue of serious importance for us to be debating is the future nature of the Democratic Party, and left-wing politics in general in the U.S. of A, for both the rest of this electoral cycle – and for the foreseeable future.

Hunter S. Thompson, in the book I spent a goodly portion of my early twenties straight-out living, Fear And Loathing In Las Vegas, penned a beautiful paean to the lost promise of the counter-cultural revolution of the 1960s. It’s often called “the Wave Speech”, and I thoroughly encourage you to look it up. In it, he eulogizes the way that a tumultuous series of crises and catastrophes conspired to bring about the end of that particular political dream (and in other of his writings, points a particular finger at another controversial Democratic National Convention – in this case, the 1968 one held in Chicago).

“We had all the momentum, we were riding the crest of a high and beautiful wave. So now, less than five years later, you can go up on a steep hill in Las Vegas and look West, and with the right kind of eyes you can almost see the high-water mark – that place where the wave finally broke and rolled back.”

Sound familiar? For Bernie supporters, it certainly should.

For many of us here in 2016, that elegiac high-water mark is probably Senator Sanders himself nominating Hillary Clinton for the Democratic Candidacy in this year’s Presidential election. Certainly, it will be some point scattered around the Democratic Convention itself, if not that precise moment.

Up until then – up until that Convention – it had somehow still seemed possible that Sanders might still, inconceivably either take the Nomination himself … or nevertheless force the inevitable Clintonite juggernaut to accept such humbling, crippling concessions that the post-Bern beast which thusly arose might bear nothing but a passingly vague resemblance to the pro-TPPA ultra-Hawk candidate that had terrorized our television screens for much of the preceding electoral cycle.

But it wasn’t to be.

Whether by the combined might of DNC corruption to ‘tip the scales’ against Sanders when it came to the delegate-count; the sheer overwhelmingly confounding institutionalized paranoia about what a Trump presidency might bring; or simply, as some have darkly joked, the semi-literal threats of what Clinton et. co might have done to Sanders if he’d held out … the old man finally decided in the interests of party unity for a party he’d only just joined to sit this one out and apparently adopt a sinecure position as Clinton’s cheerleader-in-chief.

And while this was arguably a minor tragedy in and of itself – especially in an emotive sense – I guess a moment like this might still require some sort of justification in order to substantiate the “high-water mark” labeling.

So it’s this. The #FeelTheBern campaign represented something fairly unique in the annals of recent Western politics (particularly in the Anglosphere). A genuine attempt to not just put strongly and ardently anti-Neoliberal politics at the direct heart of a modern electoral contest … but also to engage in what you might term an ‘Institutional Revolution’, and take back a party of the nominal ‘center-left’ (which nevertheless, as they are wont to do, frequently seems to behave more as a creature of the ‘center-right’). Call it creating a ‘safe space for Socialism’.

Whatever. The point is, it didn’t work. And for any number of reasons – mostly because the institution true-lefties and young people were seeking to take over … turned out to be about as hostile to this sort of outside interventionism as one of the Middle Eastern countries so thoughtlessly ‘democratized’ under Mrs. Clinton’s watch as Secretary of State.

This doesn’t necessarily mean that such an effort might not work out in the future – but for the moment, just like the Egyptian Deep State rolling Mohamed Morsi in favour of yet another in a long line of more American-amenable dictators, the Powers That Be within the DNC have conspired to head off Hope & Change in favour of going back to the status-quo ante-bellum. A good example of this is the selection of ardently pro-Wall St and TPPA, Tim Kaine as Hillary’s VP pick. “Where’s your ‘Revolution’ now?!”, indeed.

All of this leads up to some fairly uncomfortable choices for Democrats-left-of-center and more proper Social Democrats going forward.

It would be a bitter pill, indeed, to vote for Hillary Clinton come November. But, so the argument goes, there is no choice. (And I’m sure we all remember that “T.I.N.A.” – There Is No Alternative – is a favoured Neoliberal rallying-call to get the skeptical to accept the unpalatable everywhere from Thatcher’s England to Douglas’s Aotearoa) Trump is apparently too terrifying to risk doing anything other than granting total, blind and unqualified loyalty to Clinton at the ballot. Weathering the four or eight years worth of bad Presidency which Clinton may bring is thought to be far superior an option to taking a gamble on what a Trump-era might entail. “And don’t you DARE vote for Jill Stein!”

But here’s a thought, and a probably highly controversial opinion.

What if Trump winning made it more likely rather than less for leftists to get organized, field candidates, and win seats in the American political system. What if the stultifying and suffocating influence of the Clinton-machine Democrats had exactly the opposite effect (certainly seems to be working like that already). What if, in short, it was actually desirable from a long-term left-wing perspective that Clinton lost in November?

There’s already some precedent for this internationally. Here in New Zealand, for instance, one reason why the true-left wing resistance was so slow and inefficient at organizing and mobilizing against Rogernomics was precisely because it was the nominally left-of-center party carrying out the reforms and the dastardly right-wing economic agenda. Just like Clinton. It took the evils of Ruthanasia carried out under National for parties like The Alliance and New Zealand First to properly coagulate and start winning serious electoral victories.

I don’t begrudge people who’ve made their own personal judgement-call that Trump’s over-the-top and abhorrent rhetoric means that he’s a bete-noir who absolutely must be beaten at many costs (although I DO most strongly sneer at those who seek to pretend that Hillary is an actually-objectively straight-up Good Option on her own terms and merits).

But if Americans (in whole or most likely in part) were serious about challenging the prevailing conditions of neoliberalism and globalism which have so perniciously ensnared their country – and thus the world at large – for so long, then perhaps a different conversation is needed.

Instead of ringing in the Apocalypse with manic doomsaying about the Republican option … or celebrating a decidedly false-Messiah (for the purposes of this metaphalagy, perhaps a proper functional Anti-Christ) in the form of the current Democratic nominee … how about thinking of and discussing the serious business of building up a genuine left-wing alternative option and what might be required for this in the immediate years to come.

That’s how we get The Wave to roll back. In, this time.

Ensuring, in other words, that the tide doesn’t stay out forever – and that the much-mythologized wave of history one day does in fact roll in up the beach again.