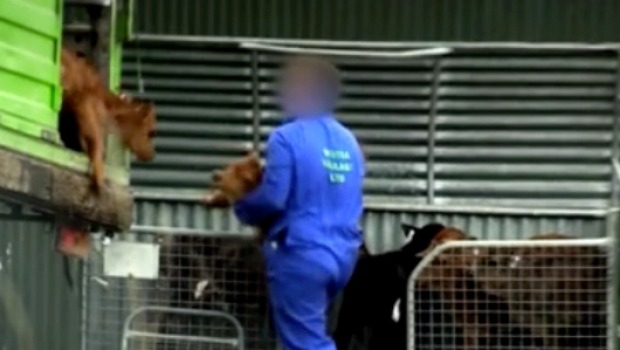 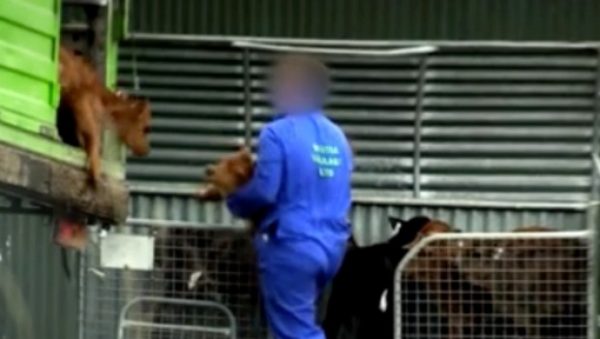 Dairy industry representatives, academics and the Minister for Primary Industries were full of denials this week as they all sought to explain, excuse, diminish or justify animal cruelty on dairy farms, exposed again by FarmWatch.

Of ten apparently random dairy farms surreptiously filmed by FarmWatch, nine showed mistreatment of ‘bobby’ calves. Newborn calves unwanted for breeding or meat were shown aggressively separated from their concerned mothers, one calf at least was dragged across the paddock by a hind leg, some were left dead in wooden bins, discarded. Many were callously thrown into crates on the back of tractors, kept waiting for collection in basic cages on the side of the road, hurled, brutally, into the back of the trucks used to cart them off to death in the meat works.
No one should reasonably deny the video footage shows the mistreatment and cruelty to innocent young animals – and their suffering mothers, but dairy industry advocates do, and their defences ring hollow.

Nathan Guy, Minister for Primary Industries, said “a few laggards” are responsible for these instances – as if it was just by chance that nine of the ten farms filmed showed brutal behaviour toward the calves. He said such farmers and animal handlers ‘need to pull their socks up”, as if they’re schoolyard miscreants – not actually breaking the law, damaging dairying’s reputation, hurting and killing innocent and confused, newborn animals. Mr Guy claimed there are ‘hard hitting’ regulations in place against animal cruelty, that infringement notices can be applied, that improvements are on their way…. All the while dismissing and demeaning the severity of the treatment shown and the systemically exploitative and cruel practices to animals and the environment, on every day farms.

There are two million unwanted dairy calves sent to the meat works each year. And an unknown quantity that don’t make it that far. For the 12,000 farms in New Zealand there are only 17 dedicated welfare officers and 31 compliance officers. That’s about 100,000 calves per inspector. FarmWatch say new rules brought in last year after their expose of widespread brutality to calves, have done little to address animal abuse. Behaviour as shown in their videos was illegal then, as it is illegal now, but little compliance action is taken and abuse is still the norm.

Federated Farmers representatives admitted that such practices are part of everyday farm life. Lifting and dragging calves from a hind leg, or forcefully hurling them backwards into trucks, is not cruelty they said, despite the evidence. “It’s common farming practice”, “typical farm life”. Andrew Hoggard, Federated Farmers’ Dairy Chair, admitted ‘It did look rough” however. “It wouldn’t look great to someone who isn’t used to farming”. But he also sought to pass the buck, saying “it’s not farming that’s the issue but truck driver handling”. As if the truck drivers throwing the animals into the truck didn’t follow the forced forced breeding and milking of cows, separation of calves from mothers, and as if it didn’t precede the transportation of said calves jammed in trucks to the slaughter house – where of course FarmWatch have also revealed atrocious treatment of these placid animals.

Federated Farmers say farmers ‘treat their animals like their babies’. I’d like to believe that there are kind and loving farmers out there. But the whole process is one based on disrespect, mistreatment and exploitation of animals.

Andrew Hoggard said public outrage shows people’s disconnect with farming life”. In that case, FarmWatch is doing us all a favour for exposing what would be appalling treatment for any animal. If this treatment was inflicted upon a dog or a cat, there’d be hell to pay. The public certainly shouldn’t support it.

The dairy industry and its marketing gurus would have us believe dairying is all happy cud-chewing cows in flowery meadows, not captive and milk producing ‘machines’ and ‘discarded’ calves thrown about like inanimate objects. FarmWatch have exposed a landscape of heartache, maternal loss, brutality. Dead calves lie disregarded, piled on top of each other like holocaust victims. Live calves are treated like the nearly dead. Add to that Mike Joy and others’ revelations about wider environmental impacts of dairy and it’s clear this isn’t just an isolated issue, but strikes to the heart of farming as an economic model where animals, earth and water (and some employees) are treated like things; commodified, economic units. Worthless only except in terms of potential earning.
Meanwhile Professor of Agribusness at Waikato University, Jaqueline Rowarth attempts to say separating babies from their mothers at a few days old is best practice. Throwing them around even though they’re unsteady enough on their feet, hurling them into trucks and taking them to the meat works to be killed, ‘it’s not cruelty, it’s not like waterboarding, or pulling the wings off flies (??), it’s not ‘torturing for pleasure’’’.

Professor Rowarth says that the videos, and campaign to expose animal mistreatment on dairy farms is driven by a vegan agenda. But if the poor treatment didn’t occur, there would be nothing to expose. And for many, such practices are what drive the vegan agenda, not the other way round.
Dairying is an industry where mistreatment of animals and the land and water, are the norm, where animal cruelty and despoliation of nature are defended by the government. As ‘common farming practices’ such as these are exposed, for whatever reason, it’s legitimate that they should be rejected by consumers, and changed by farmers and governments alike. Until the regulators and the producers recognise there’s a problem that needs to end, increasing numbers of consumers like me, will pledge to be dairy free, and refuse to buy into the dirty dairy model and its products. That will be better for the animals themselves, our own health, and the planet.