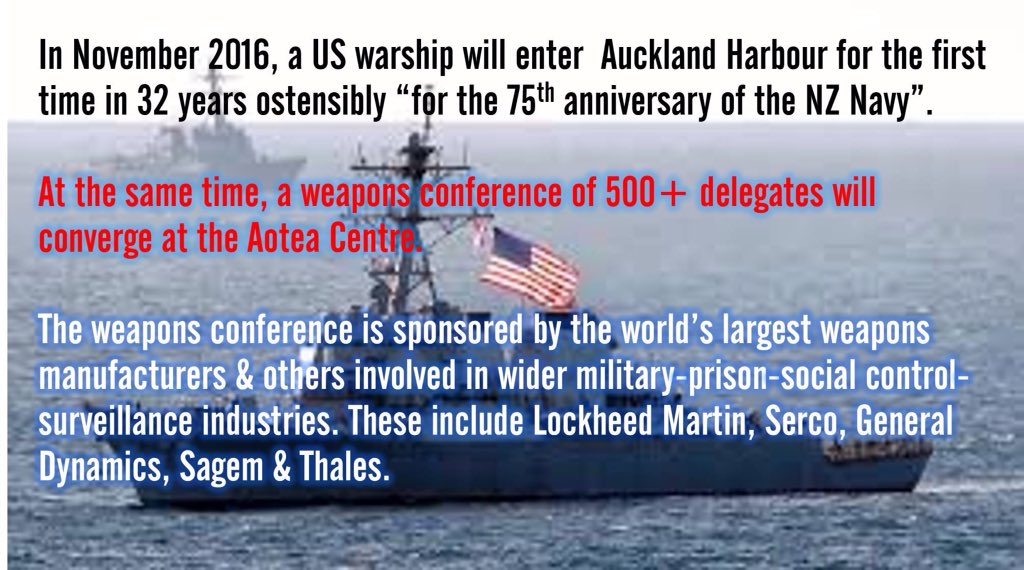 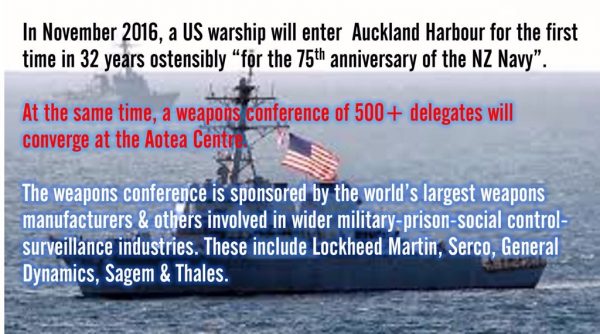 In 2011 Auckland was declared a ‘City of Peace’ by the council. This is a declaration taken quite seriously by other international cities of peace, but perhaps not by our own. The CEO of Auckland’s regional facilities defensively claimed, after a request for information regarding the council’s decision to host the upcoming weapons expo, that its focus is on economising and reducing the cost of military spending to the taxpayer… and protecting us… and not all the exhibitors are weapons manufacturers, some of them make clothes. So there.

Then there is the question of the visiting naval representatives of 17 different countries, many of whom are bringing warships to Auckland’s harbour for a friendly ‘celebration’ of our navy’s 75th birthday. Regardless of whether the visit of the first US warship to New Zealand in 32 years is a victory or a betrayal, it’s still hypocrisy. John Key has assured us that according to publicly available information, the US ships that are visiting are not nuclear-powered nor do they carry nuclear weapons. Oh, that’s alright then, except that the US are still sticking by their ‘neither confirm nor deny’ policy, which has been a sticking point for 32 years stipulated by New Zealand’s nuclear free policy, and as far as I know Key’s government hasn’t secretly rewritten this policy without anyone knowing, so I’m not convinced.

I am told that by objecting to the naval celebrations and all that has been tacked on to them, I am dishonouring our brave servicemen and women who have risked their lives to keep us safe and uphold our nation’s values. On the contrary, I have the utmost respect for people who are willing to die for their ideals and who fight for those that cannot defend themselves. We should treat them better when they return with PTSD. Families of soldiers slain in Southeast Asia in the 1950s and 60s have for decades petitioned the government to bring their bodies home. Last year the government reiterated its standing refusal. Just this month they changed their tune, saying they will ‘investigate’ the possibility, after Australia recently brought back the bodies of its own soldiers. A number of soldiers seeking compensation for injuries and health problems incurred in overseas wars and passed on to subsequent generations – including exposure to Agent Orange in Vietnam and radiation from Nagasaki – have been forced to do this through the Waitangi Tribunal, in 2014, after failing for years to get any traction in parliament.

Those who fought in the World Wars thought they were doing it to end war. We dishonour them by perpetuating it.

The argument of course is that we are all about ‘defence’. Oh and don’t forget that other favourite euphemism: ‘peace-keeping-and-disaster-relief’. Why do peacekeepers need to be armed? Peace-keepers have never been neutral. Ours are no exception. The emperor has been prancing about in the nude for decades now, but we still let this shit happen under our noses.

As New Zealanders we like to think of ourselves as neutral or peace-keepers, and this is a national self-image that’s worth preserving, but first we have to make it true. New Zealand has blood on its hands. Already this century our military have been eagerly involved in the USA’s dirty wars in the Middle East. Even those wars that we haven’t been directly involved in, our government has condoned with its silence.

The naval training exercises are nothing more than a chance for the boys to show each other their toys. There is an inherent dishonesty and double standard when we can, as a nation, simultaneously celebrate war and bemoan the death and suffering that result from it. The wars that our supposed allies are currently engaged in are not necessary, they are pecuniary. All of us were cut to the quick when the now-famous picture of the drowned refugee child on a Turkish beach went viral. Yet we seem to be okay with the fact that our government is supporting (or turning a blind eye to) the very policies and aggression that cause the wars the refugees were fleeing from in the first place.

New Zealand is not under threat. We should declare ourselves neutral. Kissing US military arse is only going to further prove our lack of neutrality or, at least, alienate other potential allies. Imagine what else we could do with the $20 billion that the government has just committed to military spending over the next 15 years. We could easily sort the housing crisis, with a bit left over for our underfunded education and health sectors.

New Zealanders’ attitudes are generally anti-war and peace-loving. Next month a large number of citizens, from all over the country, will convene in Auckland city to express this in the face of a pretty grotesque celebration of war profiteering. A blockade of the weapons conference, coupled with a flotilla to meet the entry of the warships, and a series of other events will make up a ‘Week of Peace’ organised by non-profit group Auckland Peace Action in response to the government’s week of wargames and weapons trading. If you’ve read to the end of this blog, I hope you will join us.