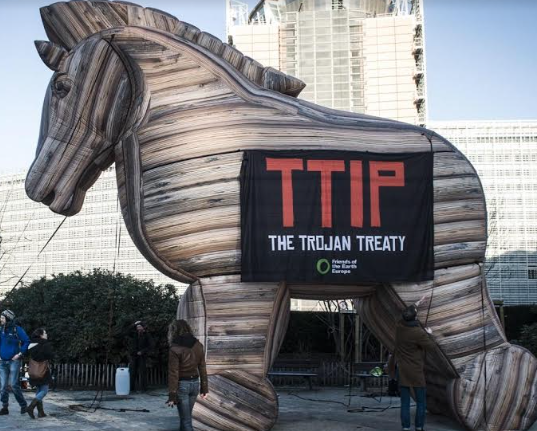 If you’re concerned about the TPPA, there is even worse to come. TiSA is a new trade deal that would leave citizens powerless to set the rules about what big multinational corporations can do in our communities and workplaces.

Governments and corporate lobbyists are desperately trying to lock in new treaties that would prevent future governments from rolling back pro-corporate policies. They recognise that there has been a fundamental swing in public opinion against treaties like the Trans-Pacific Partnership Agreement (TPPA), and they are mounting a last ditch push for new treaties, particularly the dangerous Trade in Services Agreement (TiSA).

They should not be allowed to do so. It is not only national sovereignty that is under threat – it is also the political space for democratically elected governments to reverse the failed liberalisation policies of the past.

US ratification of the TPPA hangs in the balance. It would be unprecedented for such a major treaty as the TPPA to be forced through in the ‘lame-duck’ period between the US Presidential election and the new President taking office, especially since it is opposed by both candidates. But corporate lobbyists are lining up with their chequebooks to offer a lucrative send off to departing Congress and Senate representatives. Whatever happens, the TPPA will not come into force before the next New Zealand election. In government, our plan as the Green Party will be to withdraw New Zealand from the TPPA.

But we also need to be aware of other dangers. There is also a huge push for the Trade in Services Agreement (TiSA) to be concluded before the end of this year. Like other treaties, the word ‘trade’ masks the reality. This is another Trojan horse treaty that hides dangerous restrictions on the rights of governments to regulate business. TiSA is huge, encompassing 50 governments, two thirds of the NZ economy, and 70 percent of all jobs.

As with the TPPA, the details have been kept secret. Cover sheets to leaked chapters suggest the negotiating documents, aside from the final text, will not be released until five years after the negotiations finish, too far into the future to hold government to account. Trade agreements do not have to be so secret. The EU, Switzerland, and Norway are now releasing details of their negotiating proposals, as have previous New Zealand governments. But not this Government. The Trade Minister, Todd McClay, pretends to consult, but there is no sign that he is listening.

We know some of the TiSA dangers from a number of chapters of the negotiations text that have ended up on Wikileaks (https://wikileaks.org/tisa/).

TiSA would further liberalise financial services, even though the Stiglitz Commission warned that these kinds of treaties contributed to the Global Financial Crisis. The lessons have not been learned. TiSA would restrict the powers of government to control speculative flows of money or limit ‘innovative’ financial products or limit the size of financial institutions. Instead of regulating the corporations that are ‘too big to fail’, TiSA would add steroids to their diet.

Proposals in the TiSA energy chapter would remove the rights of government to differentiate between fossil fuel energy and renewable energy, undermining action on climate change. E-commerce proposals would prevent governments from regulating new technologies, even though we have no idea what rules and protections may be required. Agreements like Maritime Services would lead to a race to the bottom for workers’ rights. Walmart and others are seeking through TiSA to prevent local governments and communities from deciding where new supermarkets can locate and how big they can be.

The US Chamber of Commerce supports its dominant IT corporations and cloud-based storage by removing the right of governments to require data to be held locally – this would undermine the right of privacy and data protection, while opening up our own personal data to US surveillance.

In addition, there are parts of the agreement that apply across all service sectors. New Zealand trade negotiators have proposed a radical new test so that regulation would have to be “no more burdensome than necessary”. This means no more burdensome to foreign corporations, rather than no more burdensome to citizens or small business or vulnerable people. Such a test that could potentially be used to overturn virtually any regulation, except where corporations are subsidised to accept regulation. This proposal would create the conditions for many more regulatory failures like the Pike River disaster, finance company collapses, and leaky homes.

We need governments to have the right to protect the environment and take action on climate change, uphold the rights of workers and rights under te Tiriti o Waitangi, protect public health, regulate financial speculation and support small and local businesses. TiSA represents a major threat to sound regulation in the public interest. As usual, there is a phrase that says governments retain the right to regulate, but as the WTO Panel in 2004 put it, “regulatory sovereignty ends when the rights of other Members under the GATS are impaired.”

New Zealand has been pushing these negotiations, as part of a group called “The Really Good Friends of Services” (sic). Behind them is a group of corporations that have been driving these negotiations in their own interests. In the initial negotiations, the WTO Director of Services said that, without the tremendous pressure exerted by financial services companies like Citicorp and American Express, there would have been no WTO agreement on services. Now Citicorp is the Chair of the powerful Coalition of Services Industries pushing TiSA.

There is a growing international movement against these Trojan horse treaties.  After opposition from France and Germany, and actions by over two million EU citizens, the Trans-Atlantic Trade and Investment Partnership (TTIP) will not go ahead. There are substantial and growing movements against treaties for corporate rights, including leading trade, economics and legal experts, as well as civil society groups.

Todd McClay has called for a trade policy “refresh”. That would be like putting on a band aid when major surgery is needed. It is time for a fundamental change towards treaties that respect sovereignty, environmental limits, greater equality, human rights, and local economies.