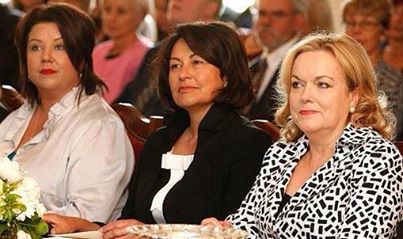 The big shake-up in education has resulted in a big shakeup for Hekia Parata. She drew a line and refused to proceed in the manner set by John Key, Bill English, and Stephen Joyce. These three will be the drivers in whoever replaces her – that person will be a cypher.

Hekia couldn’t commit herself to the extreme hardline right education policies being prepared for 2017 election manifesto.

Those in education will recognise what is happening as the neoliberal tragedy-go-round: neoliberal polices imposed and of course failing because they are about meeting adult ideological needs, and of the worst kind of adults, neoliberal politicians – not about children’s needs in all their complexity – and that failure is blamed on schools which is then used to justify even more repressive neoliberal policies.

My information is she will step down over Christmas.

I gave her no quarter in my prediction of her resignation because she has, indeed, been the worst minister of education ever. She deserves no sympathy for her terrible actions; like Anne Tolley she has been used as a cover for English’s neoliberal drive and Key’s deep hostility to public education – but Hekia did some unforgivable things, and I stand by every word. A top academic said surely Lockwood Smith was worse; no I said he was a bumbler more old conservative as against someone with a vicious streak and new neoliberal or in Hekia’s case a cover for that.

Hekia knows, except for some academic and principal cronies, she won’t be missed, and that she will go down in education as the worst minister of education ever, unparalleled in never allowing a fact go by without seriously interfering with it.

Deep down she knows history will condemn her, the most chilling condemnation, in particular, will be her betrayal of Maori children with her pernicious 18% rhetoric; and the mayhem created by her leadership style; locked as she was into an inability, because of her personality, to introduce education change, even in the rare circumstance where it meant good, without revelling in the power of imposition and thereby tattering the possibility of that good.

Nevertheless, with all this, I said ‘Hah!’ things are getting beyond her, get ready for the profile spin; she will be contemplative of her job.

And on 27 September there it was in the NZ Herald; what a strange foundling of an article it was by Nicholas Jones. He had obviously been called in by Hekia’s media team and handed the bundle.

I immediately knew with she was a goneburger. In some ways it was pathetic, she was trying to resurrect her liberal persona for her own sake and reputation.

There was a potted history of the girl from Ruatoria being marvellous scattered throughout the article, along with bits and pieces of the so-called shake-up and some comment from education spokespeople.

It had the structure of a squashed jellyfish

So there it was, ostensibly about the big shake-up but really about Parata trying to come across as the Ruatoria girl next door: we get loads of family references, for instance, crossing the Waiapu on horseback to go to the rugby, her secondary school principal father, and a lot of attention to All Blacks (even an actual tweet sending best wishes to the World Cup squad), then a reference to Waikato university days and ‘helping to get the Hamilton game called off’ (sorry Hekia I was there, and all the other weeks before, noticed Donna but not you). Also how she resigned from the Party over Don Brash.

The article in its formlessness and idiosyncrasy unprecedented surely  in newspaper history.

Something was up and that indicates Hekia was in danger of coming down.

For Hekia to use this populist, down-home stuff to distract from the way she ripped the heart out of New Zealand schools, especially primary schools, to rebuild her reputation and maintain her self-esteem has a creepy element.

With her million dollar smile and oleaginous demeanour what a cold-hearted minister of education she has been. She betrayed Maori children;  and now, once again, children with special needs. She once notoriously hinted that special needs children are a result of poor teaching and teachers should just get on with it; and here we have the miserly funded targeted provision, and even worse bulk funding, with special needs children set to suffer the most, along with other children requiring individual attention, many of them Maori. And let’s not forget Christchurch – she was at her worst, and that is saying something,

But I am drawing a line now, with her going her best moment.

Hekia could have continued, but she would have realised that going against the inevitable institutional compromises, relationships, and assurances that education tenure always involves, in combination with the awfulness of the education changes contemplated, would have been an administrative nightmare

For Hekia it was a step too far.

What are we to expect in the future? bulk funding and clusters to be imposed; clusters to be an immediate, local, and stifling way to impose conformity; principals to be state servants; opening up of principal positions to businesspeople; appointments and salaries by results (based on bulk funding); teaching and principal positions on contract; a downgrading (in effect) of boards of trustees (subject to increased direction from the centre); new types of schools – a combination of charter schools and academies; a huge emphasis on computer use; larger classes based on that computer use; schools to be vocationally organised; a rigidly laid out curriculum; more rigorous testing and immediate relaying of results to centre; the use of overseas privatised companies to advise and develop programmes of work.

All this has deep implications for the teacher organisations: it will free teacher organisations of previous assurances and commitments; they should rethink their position, role, and philosophy; NZEI needs to become a democratic organisation concentrating its work on keeping members in schools fully informed; teacher organisations should carefully maintain their independence; but they should be very wary of striking and direct action; the guiding policy should be to maintain communication with the government but to act on the understanding that the issue is one of winning hearts and minds; as part of this they need to develop internal think tanks and carefully constructed procedures for relating to the media and generating publicity.

The birds are tweeting – I’m off to at least get an hour.