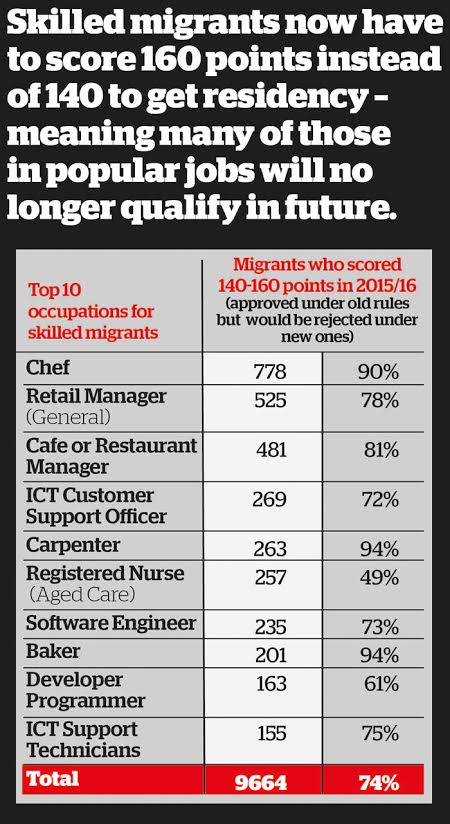 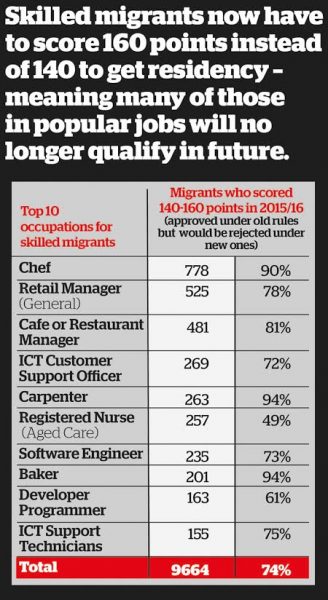 Just a few months ago Andrew Little was attacked by the government for questioning whether New Zealand actually needed so many chefs as part of the skilled migrant category.

That same government has just adopted a policy that will eliminate 90% of those who had previously qualified under that category.

The government has been caught juggling too many balls and has ended up adopting a response that is probably going to bite it in the foot.

The government has been in denial on some obvious things happening to the economy and labour market.

It is simply a fact that speculative investments (including foreign investors) are cranking up the real estate market to become a bubble that threatens to burst.

Capitalist business owners have also been caught out using the vulnerable position of some of those who have come here to work and study to exploit them without mercy. And that includes many major businesses owners and not just smaller ethnic restaurants.

Under political pressure from Winston Peters rhetoric claiming there were “too many” immigrants the government has trimmed the overall number being given permanent residence by five percent. New Zealand had a target of 90-100,000 over two years and now the target is 85,000 to 95,000.

The number of approvals has been in the 40-50,000 range for over 15 years, including when Winston Peters was in coalition with the Labour Party-led government from 1999-2008. Normally New Zealand needs that sort of number just to replace the population it is losing.

But there has been a surge in net migration gain in numbers over the last few years because of a major swing around in the number of New Zealand residents leaving the country on a permanent or long-term basis. This has cut the net loss to Australia from 40,000 in 2012 to near zero today.

From simply replacing those who have left the permanent residence approvals have contributed to a record migration gain and an overall boost to the population.

From the government’s point of view, this helped hide rather anaemic economic growth figures. It has also boosted the population significantly over a short period of time and fed the property price boom.

There have also been many scandals associated with the exploitation of migrant labour in often unskilled work categories.

The government began to appear in denial on some fundamental economic challenges and was opening its flanks to crtics like Winston Peters.

This is what prompted the reduction in overall resident permit numbers. The actual reduction is minor and its impact on total numbers moving to and from New Zealand will be negligible. But the government can claim to be seen to be doing something rather than pretend there are no issues to be dealt with.

However to achieve that reduction in the number of people being granted permanent residency the government has increased the points required from 140 to 160 in the skilled migrant’s category. They also completely suspended the right to bring parents in.

The effect of this relatively small change, however, is to radically reduce the numbers being approved from a range of job categories that had met the test for skilled migrants in the past.

New Zealand has also been marketing itself as a migrant destination to recruit hundreds of thousands of people to come here to study and work each year.

Having a chance to transition to a permanent residency is a key to attracting that pool of labour. Billions of dollars a year is being taken off students in fees and they are a source of cheap labour while they are here. Often they work unskilled or semi-skilled jobs.

After completing a year-long course the student can get a job search visa for a year then a two-year work visa. Often the work can at best described as semi-skilled.

The skilled worker category makes up around nearly 30,000 or 60% of the total residence visas in 2015/66 with the remainder being family reunification and some humanitarian categories.

Several hundred thousand temporary work visas are issued each year and a large percentage of these people are competing for that relatively small pool of skilled category visa. Desperation and exploitation are ever present. Rule bending and breaking are common.

However, radically reducing the number of people able to come to New Zealand in these categories means that thousands of students who have invested hundreds of thousands of dollars in the dream of achieving permanent residence have had the rug pulled under them part way through the process.

It will also possibly completely undermine the tertiary education sector that has depended on that dream being at least partly real to suck in fees and the businesses using and abusing cheap and vulnerable labour.

Reducing the number of those eligible for permanent residence only intensifies the competition between those already here and makes them even more vulnerable to being taken advantage of.

The government has announced it is reviewing the whole points system for permanent residency.

Whatever they do you can be sure they will keep on bringing in students and workers on temporary visas for their big business mates to use and abuse.