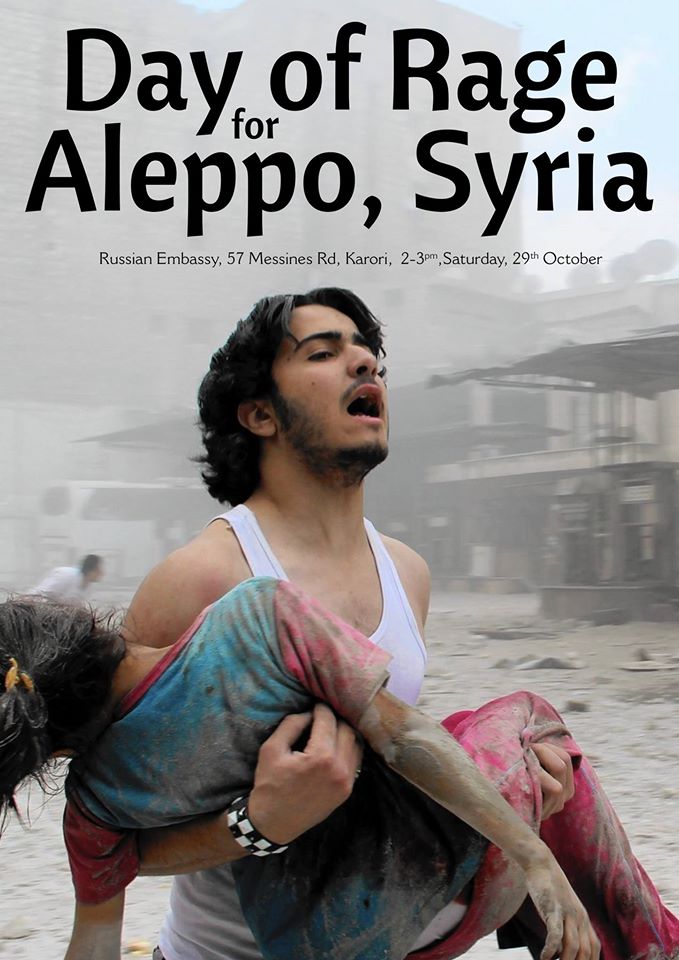 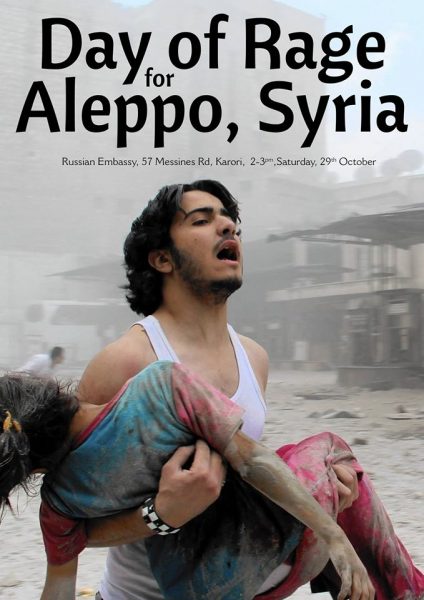 Civilians in Aleppo and across Syria are being intensively bombed by Russia with bunker bombs, phosphorous bombs, napalm, thermobaric and cluster bombs; and by the Syrian regime with chlorine containing barrel bombs; targetting homes, schools, hospitals, rescue teams, and underground shelters .

Like many Syrian cities, Aleppo has been under a starvation siege. The regime and Russian have even bombed the city’s water supply.

Despite these atrocious crimes against humanity, Aleppo’s people show tremendous solidarity and caring for each other, as they work to find the wounded under the rubble, and rush them to undergound clinics for treatment. Hundreds of democratically run community councils have been formed across Syria in the liberated areas. They have produced a tremendous amount of art, literature, music, and electronic media documenting the revolution and counter revolution in Syria.

The “peace” talks have broken down. It is clear that Russia and the Assad regime are looking for a military solution to enable the genocidal Assad regime to continue in power.

Most of the fighters killing Syrian civilians are not Syrians. They include soliders from Afghanistan, Lebanon, Iran and Iraq, many of them conscripted or desperately poor with no other options for a living.

The Assad regime and Russia have killed half a million Syrian people. The genocide has to stop! The regime regularly uses rape and torture as weapons.

The war started because people across Syria went onto the streets to demand democracy, and instead were shot, rounded up, tortured, raped and killed. So the people took up arms to defend themselves. The Assad regime has vowed to continue to obliterate the population until it accepts his rule.

Both the United States and Russia have re-defined the people’s struggle for democracy as a “war on terror” and are both responsible for killing civilians.

Isis grew in Syria with the encouragement of the Assad regime. Assad deliberately released extremists from his jails, who went on to join Isis in Syria. The regime leaves Isis alone, and Isis is continually attacking the democratic opposition groups. The democratic opposition has been forced to fight on two fronts, against the attacks from the regime and from Isis. Despite the evils perpetrated by Isis, it has killed a fraction of the number of people, that the Assad regime has. The Assad regime with its Russian and Iranian allies are the greater evil.

Stop the bombing! Troops out!
No more genocide! Solidarity with the Syrian Revolution!
Victory for Syrian people now!

Join us on Sat 29 October at 2pm at the Russian Embassy!