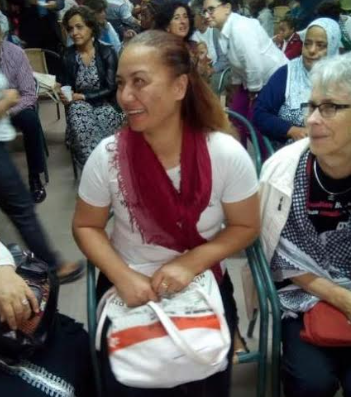 Poor Israel! A fearsome warship (well, small sailing boat really) was approaching her shores (well, the shores of Palestine under international law really). On board were dangerous terrorists armed to the teeth with all sorts of dangerous weapons. ( well, peace women actually who had, as the whole world including Israel knew,  no weapons, well they did have a guitar) But they must have had some evil intent (well, to meet Gaza Palestinians, especially the women and to hug the children. To let people know they they weren’t forgotten. Maybe even sing the song one of the women wrote while at sea)

Brave Israel! The Israelis refused to be cowed. No way! Three warships intercepted the Zaytouna and forced it into Israel.

The Zaytouna was intercepted  55 km  from Gaza, 20 km outside Israel’s so-called ‘security zone’ of 32 km.

Well then who were the 13 women on board the Zaytouna? And why did they take part ? (Probably terrorists, or to be kind, misguided, ignorant, politically naive, with no understanding of the reality of today’s world. )

Let’s meet some of the women.

But there was only one boat. So only 13 women volunteered. ( Two boats set out but one broke down, leaving many women upset, in tears even. The problem is not finding women to volunteer but finding the funds. The US gives Israel billions to expand its war machine but nothing to peace people. )

Anyway the whole effort was futile wasn’t it. Nothing was accomplished. Our newspapers ignored the whole thing. They had more important stories to write about. (Ann Wright reported that “especially on the last three days, our satellite phones rang virtually continuously with interviews with media from all over the world. Our participants described why each felt it was important to be on the voyage. The exception to media coverage of the Women’s Boat to Gaza was the U.S. media that did not call for interviews and gave very little information to the citizens of the country that most supports Israel and its policies that oppress and imprison Palestinians.” It’s true that NZ papers were more interested in the escapades of an All Black in a toilet than in an historic and courageous undertaking by a NZ MP. Maybe this says something about how  NZ media perceives its role.)

Was the effort futile? Not to  Gazans themselves, who  say they are heartened knowing that there are people of conscience around the world who have not forgotten them.  The effort showed the world, showed everyone with their eyes open, with any sense of humanity, that the siege is cruel and must be broken. Now it’s up to us to pressure our media and our polical leaders.

Lois and Martin are retired teachers who met and married in Malawi, Africa. They share an interest in international environment and justice issues. They are specially concerned about the plight of the Palestinians, having been to the Middle East and made friends with Palestinians and Israeli human rights activists too.