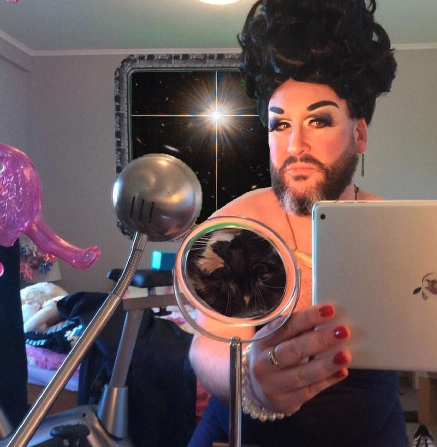 I’ve never been good with knowing what to do with my emotions. They seem to be on their own cycle, like the tides and the weather. And without revealing too much of my journey of self discovery, at times my emotions have stormed, and my life has crashed onto the jagged rocks of the psychic shoreline as the waves crash over and over.

Once upon a time miners would take a canary into the mine with them, because canaries were sensitive animals, they would succumb to poisonous gasses first, giving the miners early warning to get the hell out. In our society, our culture, our community, and my own family, I have played the part of the emotional canary. My emotional reserves running at the limit of their tolerances by the ongoing stresses caused by my inability to conform to gender norms. Then honed to exquisite sensitivity though ongoing scanning for danger in public spaces.

I was the first one in my family to be waylaid by a mental health speed wobble. Oh LaQuisha, she’s so crazy. But as the decades ticked over, the others started to fall too. This is when I realized I was the canary. The illness was in the family all along, it was just that I was that much closer to the psychic metal than the rest of them.

I tried to talk to them, well, truth be told, I blasted them. A few years ago. For my own well-being really. Because not talking about what’s going on is a sure fire way for me to get depressed. That’s how my family rolls, we don’t talk about what’s going on. One of my brothers hasn’t talked to me since.

In a way I’ve been lucky. I had a good mind and I was raised to value hard work and education. A proper little christian soldier. So I held down jobs, for a good while I was self-employed, and so could pay for all of the therapy, counseling and travel to alternative community based support groups.

At age thirty nine and a half, I can say: I’m emotionally literate. I am comfortable in my inner world, and I understand the things I need to do to stay on an even keel.

But what puzzles me is why it took nearly half my adult life, and untold therapist and counseling bills, to get to this place.

I ask: why wasn’t this taught at the state schools that I attended? I ask: how can generations of my family not have had this knowledge to impart to us?

I would dearly love to draw some conclusions here about the state of the Pākehā psyche, New Zealand’s high suicide rate, the now almost nonexistent mental health system, and a school system based on a model of mechanized pedagogy that doesn’t mind breaking a few eggs to make an industrial omelette.

I could also draw some more conclusions about a colonial mind-set that allowed my ancestors to commit atrocity after atrocity across the globe. That in gaining an empire they lost their humanity, and then beat it out of not only indigenous populations, but also out of generation after generation of their own working class.

But to do so would require more knowledge that I currently possess, and would most certainly upset me. So we shall leave it as an exercise for the reader.