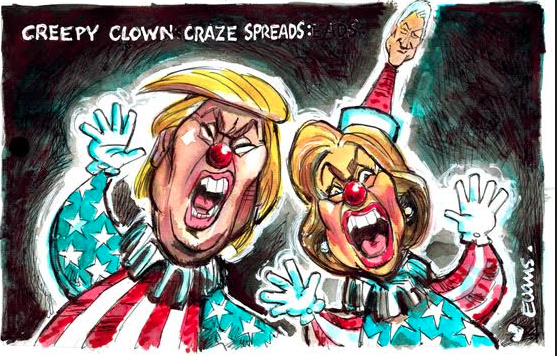 Despite noble principles, the United States’ political system makes a mockery of the promise of democracy. The Presidential contest between Donald Trump and Hillary Clinton brings the limited choice of American voters into focus and highlights just how corrupt things are in the ‘land of the free’. Either of these candidates unleashed on the world are scary prospects, but also humiliating for democracies everywhere because America wields so much weight in the world, exercising political supremacy and military dominance without the moral foundations to justify it.

Trump’s offensive and misogynistic attitudes to women, his tax avoidance, his accumulation of obscene amounts of wealth, are on one side of the ledger. On the other side, Clinton’s association with illegitimate invasions of Middle Eastern states means there’s wet blood on her hands that’s still running in the streets of Iraq, Yemen, Afghanistan, Aleppo and elsewhere in Syria.

Put that against a backdrop of historic electoral horrors that make further mockery of democracy. George W Bush’s usurpation of Al Gore – seems like ancient history- but the discrediting of hundreds of thousands of minorities’ votes in part gave rise to the mess in the Middle East and elsewhere, today; Bill Clinton’s lying about his sordid affairs while in office – and his role in bombing foreign nations in attempted distractions; Richard Nixon’s Watergate; JFK taking the world to the brink of nuclear war. Whatever way Americans vote, there’s a strong insidious and dangerous pattern in American political leadership, and no matter what the outcome of this Presidential election, no doubt we’re all in for more of the same.

And of course, economic and political freedoms in theory don’t always translate into equal outcomes. Domestically, the US has the second highest incarceration rate per capita, in the world. The States have the second highest relative poverty rates in the developed world, and 44% homeless people are workers. The 2014 US Census declared that 14.8% of the general population lived in poverty, disproportionately affecting non-whites. 2013 calculations showed one out of 30, or 2.5 million children to be homeless. There were an estimated 57,849 homeless war veterans in the United States in January 2013, and war vets apparently comprise 12 percent of all homeless adults. Sickeningly, according to Amnesty International USA, vacant houses outnumber homeless people by five times.
Given the economic alienation of many Americans, it’s no wonder political ambivalence also prevails. US voter turnout lags behind most of its peers in the OECD, at 31st among the 35 member states.

But internationally, the world’s ‘largest democracy’ exhibits other contradictory behaviour. It leads the tables in arms exports, accounting for more than 30% of global arms sales to at least 94 recipients, followed by Russia. America is also one of the world’s biggest arms importers. As long ago as 2011 they’d spent $1.3 trillion on wars in Afghanistan and Iraq. Defence spending in the latest year when figures are available, 2013, were $610 billion for that year alone, not counting ‘Homeland Security’, nuclear weapons research and other expenses.

So while actively oppressing Americans at home, abandoning those who have served in its wars overseas, it kills hundreds and thousands elsewhere, often in unarmed drone strikes, destabilising other democracies, spreading fear of destruction around the world, spying on citizens everywhere. But America does so in the name of democracy. All that is scary not just for those in the US ‘land of the free’, it’s scary for you and for me.