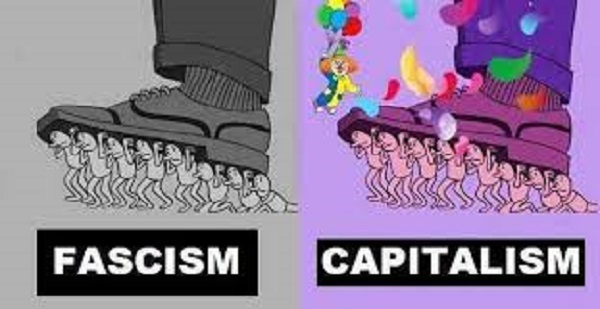 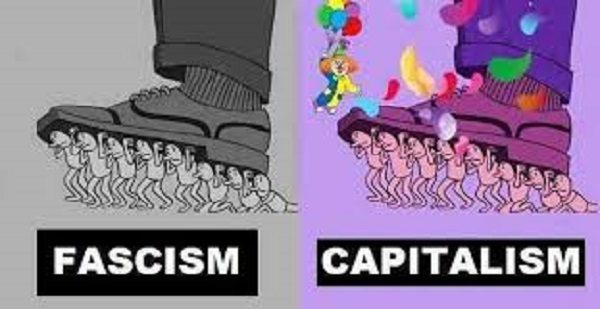 The common phrase “The World is Upside Down” reflects the widespread concern that things are not right in the world. I will argue that it is not the world that is upside down but capitalism, and that this has always been so. The catchphrase “Capitalism is not working” is closer to the truth, but likewise when has that not been true? What we face today is the decline and fall of an upside down society making way for a new society which is right way up.

Neocons (my term for all neoliberals, neocons and neo-classicals) assume that capitalism is the best society yet and anything wrong with it results from interference by monopoly interests taking control of the state. Capitalist society is seen as made up of individual citizens buying and selling commodities. The role of the state is to defend the private interests of such individuals from those who would used the state to disposses them. Spending on the police and military are a justified ‘overhead cost’ of running capitalism. This ideology of a class neutral state was always an attempt to hide the real role of the capitalist state in making capitalism work.

In fact since NZ was colonised by white settlers, the state always played the leading role in creating the market and then regulating it to manage the economic use of land, labour and capital. NZ history abounds with examples of the use of the state power to dispossess Maori, subsidize farmers, regulate unions and monopolise producer boards and so on…

This history disproves the ideology that the market rules without state intervention. There would be no market without the state. The neocons suffer from hubris and bad faith and when it become obvious that they use the state to advance their private interests. They bait and switch like crazy to deflect attention away from the key role of the state back to the dogma of market rules. For them the World is only Upside Down when the state does not work to make capitalism profitable by filling their pockets.

Liberals have always been in love with the big state because they think that the market can only work if regulated by the state. The left in government can use the power of the legislature and bureaucracy to work in the interests of social harmony, equality and welfare. Witness the First Labour Government. However, this is a faustian pact because in the process workers are turned into slaves of the state which regulates them as drones to supply the profits of the bosses e.g. the labour unions.

When they realise their dreams of social equality have fallen into the great abyss between the rich and poor, their refrain is; oh dear, The World is Upside Down, Capitalism is Not Working. For liberals to put the world right side up and make capitalism work they have to try harder. This means turning into neo-liberals and using monopoly state power to deregulate society. Workers become more productive (that is exploited) making more profits – witness the Fourth Labour Government. Scratch a liberal and you find a neocon.

In fact as the global capitalist crisis worsens and threatens to bring with it climate collapse, liberals are in a state of panic clutching as all sorts of panaceas to make capitalism work and stand the world rightside up. The problem is that it is they, the liberals, who are Upside Down. Liberals try to make society free of conflict. They get upset when they realise they can’t make capitalism work without collaborating with neocons. Labour’s great search for the middle class is running away from its working class base and the reality of class society. But the futile search for a classless state to manage a kinder, gentler society cannot overcome their cognitive dissonance.

Radicals reject both the neocon market rule mantra and the liberal delusion that social harmony and equality can by created by state reforms. The more market dementia of neocons and the cognitive dissonance of liberals cannot be solved unless the deeper cause is challenged – class struggle. Once the power of the classes are equalised then wealth can be equalised and capitalism is turned right side up and begins to work.

But what sort of classes? For radicals the problem is the unequal distribution of wealth made possible by capitalist control of the state. The bosses screw the workers by cutting their wages to increase profits. To correct this the bosses’ control of the state has to be overthrown so that workers can organise society by regulating equal exchange. For some (socialists) this means workers must take power to control the state, for others (anarchists) once state power is destroyed, there is no need for a state.

However, anti-capitalism in all of its forms fails to get to the root of capitalist exploitation and oppression. Classes formed by unqual exchange cannot be eliminated by workers replacing capitalists with workers running the state or substituting workers control over exchange. This is because capitalist exploitation does not result from unequal exchange (except as a bonus) but by the expropriation of value at the point of production. Without the expropriation of the means of production owned by the capitalist class, no amount of workers power in the state can overturn the exploitative social relations of capitalism.

Marx to the rescue

Marx’s critique of capitalism proves that neocon, liberal and radical ideas are all expressions of the ideas of the ruling class, that is bourgeois ideology. The neocons celebrate this, the liberals are ambivalent and impotent, the radicals are fooled by capitalism’s classes appearing as based on market relations. The key to understanding this is that bourgeois ideology is not invented by intellectuals but produced along with commodities as the fetishism of commodities.

Capitalism appears right side up because the unequal social relations where labour power is exploited are inverted to appear as equal exchange relations. Marx explains this inversion of reality as ‘commodity fetishism’. Instead of workers’ labour power being seen as the producer of value, value appears to be inherent in the product – commodities. Hence the struggle over the distribution of value becomes represented as one over the exchange of value in the market between workers, capitalists and landlords.

It follows that capitalism cannot be made to work by eliminating state interference in the market (neocons) reforming it (liberal) or taking it over (radicals). Capitalism as a society is created upside down to allow one class to profit from the exploitation of nature. It only works because it is upside down. So when capitalism works for neo-cons, liberals and radicals, it is still upside down. It can only be made right side up by a critique which goes to the roots of capitalist society and which drives a revolutionary transformation of capitalism into socialism.

How Marx arrived at his critique of capitalism, penetrating the fetishism of commodities and understanding of the contradiction between capitalist society and nature, stems from his critique of the German philospher Hegel, who, while standing on his head was stood right side up by the young Marx. I will deal with this in another post.