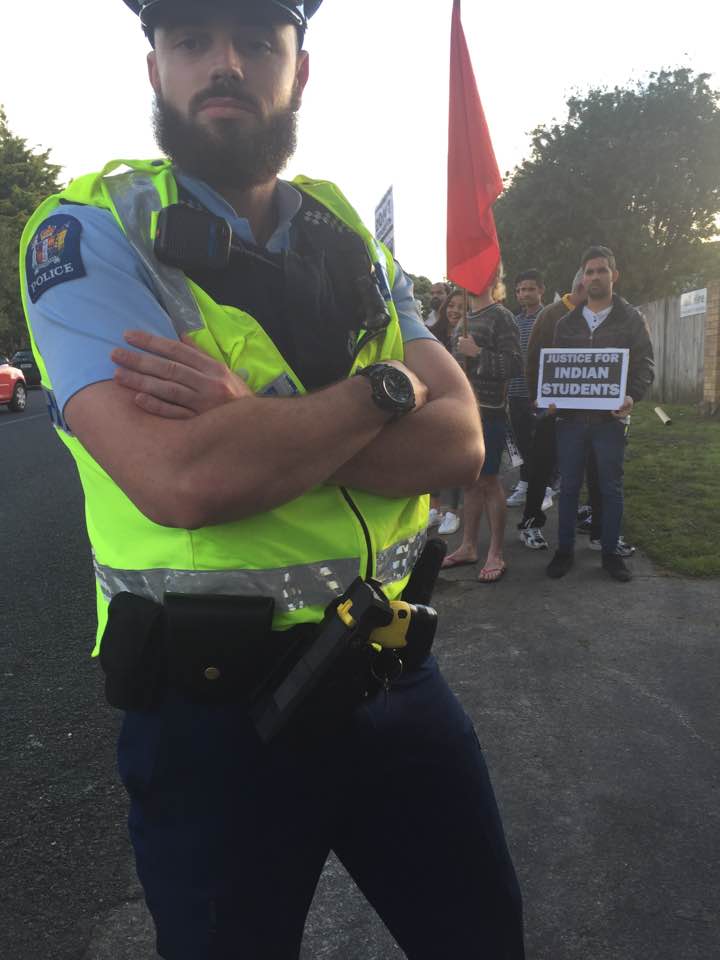 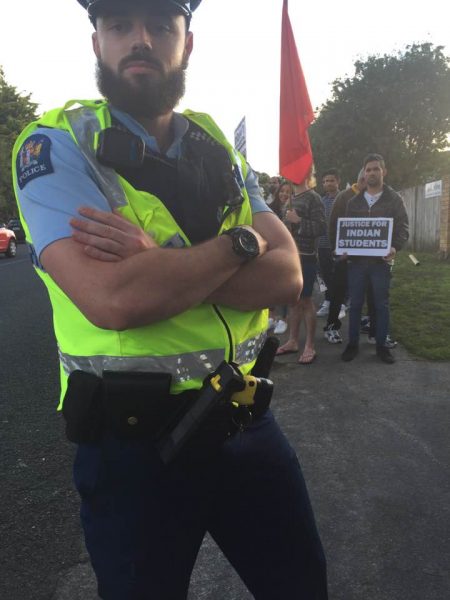 The international Indian students facing unfair deportations in New Zealand continue their fight for justice as they protest for the second time in 3 weeks.

The protest was held on Monday outside a public meeting presented by the Finance Minister Bill English and National List MP Dr Parmjeet Parmar at Lynfield Community Church, Lynfield, Auckland.

The reason for this protest was simply for the students to reach out to the New Zealand government through Mr Bill English in their plea for justice. It is to be noted that the Minister of Immigration has now completely refused to meet the students and the committee (representatives from The Catholic Church in NZ, The Anglican Church in NZ, Barrister Rodney Harrison QC, Secretary of NZ Council of Trade Unions) supporting them.

A peaceful protest by some 60-80 people outside a public meeting in support of vulnerable migrant students has been such a threat to New Zealand’s security that the police officers present had to be deployed with Tasers.

Rachel Mackintosh, Vice-President of the Council of Trade Unions, made herself known to the police sergeant who appeared to be the senior officer present. He declined to confirm whether he was in charge or to tell her his name but he did show his number. Rachel expressed concern at the presence of Tasers at a peaceful protest and asked him to explain why the police had Tasers.

The police officer’s response was along the lines of, “I don’t care, not my problem, it’s your problem”. He invited her to make a complaint. This type of response is not only unacceptable but also raises questions about why the police was present and who were they protecting. A formal complaint will be made.

The words ‘public meeting’ generally have an openness about them and very democratic and pro-people connotations attached to them. How public was National’s public meeting also demands some attention. As the Church hall partially filled up, the doors were locked from the inside for this public meeting with a row of police officers blocking the already locked doors.

Entry of public to this public meeting was carefully and selectively controlled to the extent that a media person covering the meeting from inside the Church Hall had to step out to get some equipment from their car was not allowed to re-enter to complete the coverage.

The protest lasted about 2 hours during which time the protestors remained peaceful and non-violent.

Migrant Workers Association (MWA) is deeply alarmed by the police breaking their own protocol regarding deployment of Taser weapons on democratic political demonstrations.

MWA raises concerns about this government’s activities taking place under the guise of public meetings.