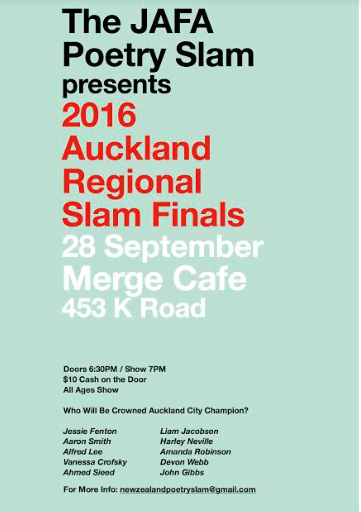 Come catch the best of the best battle it out to be crowned Auckland City Slam Champion and the chance to represent Auckland at the New Zealand National Slam Finals in Hamilton this November.

After slamming it out over the past several months for a chance to get here, the Top 10 poets will go head to head in a bloodbath of words, honesty, and brave performances in this final slam heat. The poets will compete in three knockout rounds, judged by members of the audience, to determine who the Top 2 poets going to the Nationals will be!

There will be a short open mic before the slam begins.

This is an uncensored event but hate speech will not be tolerated.

Your Top 10 Poets Battling It Out Are:

Who will be crowned Auckland City Champion? Be there to find out!
Email newzealandpoetryslam@gmail.com for more info.