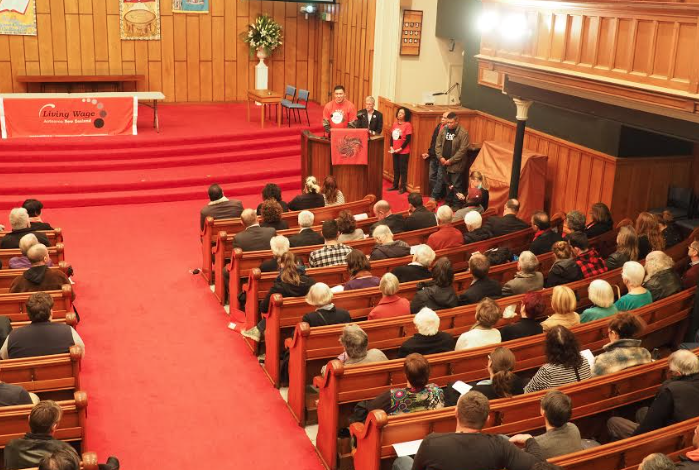 The 1st of August was a milestone day for the Living Wage movement and low paid Wellington workers. 60 security guards, noise control officers and cleaners at Wellington City Council had their pay lifted from around $15.60 to $18.55.

These E tū members were the first workers in New Zealand employed via contractors to receive substantial pay rises as a direct result of the local Living Wage campaign.

E tū has for years been campaigning to lift the pay rates of cleaners, but it has only been through adopting a broad-based organising approach with community and faith-based groups through the living wage movement that they have succeeded on this site.

Living Wage Wellington is a local alliance of faith groups and community organisations and unions.  E tū and PSA are active in the local movement and members of both unions have played activist roles.  Workers have stood over and over again to tell their stories publicly.

Workers like Angela — a single mum with 10 years of struggling on a cleaner’s rate of pay. Angela’s lived through telling her teenage daughters there’s not enough to go on school trips, buy label shoes, and sports gear. She’s a regular at the foodbank. But now her group of cleaners have got a pay rise.

Workers like Ope — a cleaner who can only afford water for lunch, although he knows he’s worth more than that. His group of workers, employed by another contractor, is still waiting.

Workers like Grace — a directly-employed young PSA member who needs special glasses and Eleanor a librarian who wants to be valued for the work she does.

These courageous workers having been telling their stories for three years. And the politicians have listened. They’ve taken significant steps forward towards becoming New Zealand’s first Living Wage council. But the job’s not finished yet.

1 September was another milestone day for the Living Wage movement in Wellington.  300 people from local faith groups, community organisations and unions packed out the Wesley Church to call on Wellington City Council candidates to commit to finishing off the job.

The atmosphere was electrifying. The big crowd sent a strong signal to candidates that Wellingtonians back this call and are prepared to keep coming back until the politicians deliver.  The roll call demonstrated the diverse range of organisations in the room — ChangeMakers Refugee Forum, health advocacy groups, Tick for Kids, a massive group of E tū members and plenty of union support and faith groups of all different hues from across the city.

Angela and Ope shared their powerful stories. Paul Barber from New Zealand Christian Council of Social Services and the Equality Network issued the challenge.  Candidates were challenged to commit to building on the significant steps taken towards Wellington City Council becoming a Living Wage employer. They were asked to commit to ensuring every Wellington City Council worker receives at least the current NZ Living Wage rate and to seek accreditation as a Living Wage employer in the next term.

Six out of eight mayoral candidates attended. Johnny Overtoun has declared himself not to be a serious contender. Jo Coughlan, who has a clear track record of voting against the Living Wage was an apology.

Mayoral candidates Nicola Young, Andy Foster and Keith Johnston were clear in their opposition. They attempted to absolve council of any responsibility for their own workforce.

Mayoral candidates Justin Lester, Nick Leggett and Helene Ritchie all backed the call 100%.   The commitments were strong and unequivocal.

Bishop Justin said: “One thing I want to say to you: don’t say it is too complex. We want leaders who are smart. This is not too complex. We want leaders who will find a way to do the right thing”. Then he told candidates not to use the excuse that the Living Wage is a government issue — that the government can legislate for it or increase the minimum wage to the Living Wage.  He told them not to make excuses that it is someone else’s responsibility, saying: “These are our workers. They work for us. We can do it”.

Finally, he committed to sending out the names of candidates who had said yes and those who had said no to thousands of Anglicans on their database. Other member organisations will be doing the same, reporting back to tens of thousands of Wellingtonians.

Wellington voters will have a clear picture of who will finish off the job of becoming New Zealand’s first Living Wage council.  The local movement will need to keep the politicians honest, but clear and specific public promises have been made.