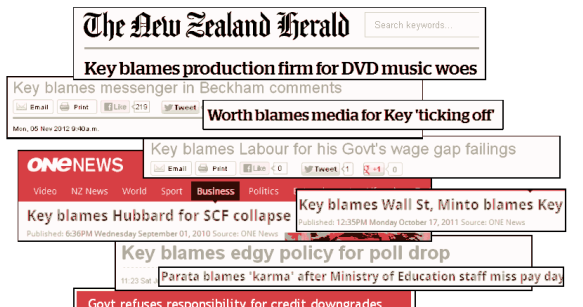 Congratulations are in order for Dr (Nick) Smith.

Not content with National’s default Blame-Game targets, Dr Smith has come up with an entire new scape-goat for National’s never-ending botch-ups; failed policies; scandals; mismanagement; under-funding; accident-prone Ministers; cronyism, and every other cluster-f*ck that a politician can conceivably come up with.

Up till now, National’s  favorite Default Deflection targets have been;

Never mind that National has been in power for nearly nine years, they can still point the finger at Labour for “the mess that they left us”. (“Mess” being record low unemployment; positive economic growth;  national debt paid down, and posting eight surpluses in a row. How many countries would love to have been bequeathed Labour’s “mess“?)

How that “mess” has survived unchanged and “fixed”,  by National,  throughout nearly a decade is never explained. Only Guyon Espiner on Radio NZ’s ‘Morning Report‘ cuts of Ministers when they attempt to resort to Deflection Number One, with an exasperation in his voice that would do the parent of a toddler proud.

The Housing crisis was a recent example of Deflecting blame to Labour;

“Under the nine years that Helen [Clark] was Prime Minister, my friend, nationally house prices went up 102 percent. Under us in eight years, they’ve gone up 43. In Auckland they went up 87 percent I think – under us it’s about the same.

Even the passing of National’s ill-fated synthetic drugs laws (later repealed as an utter legislative failure) was blamed on Labour; 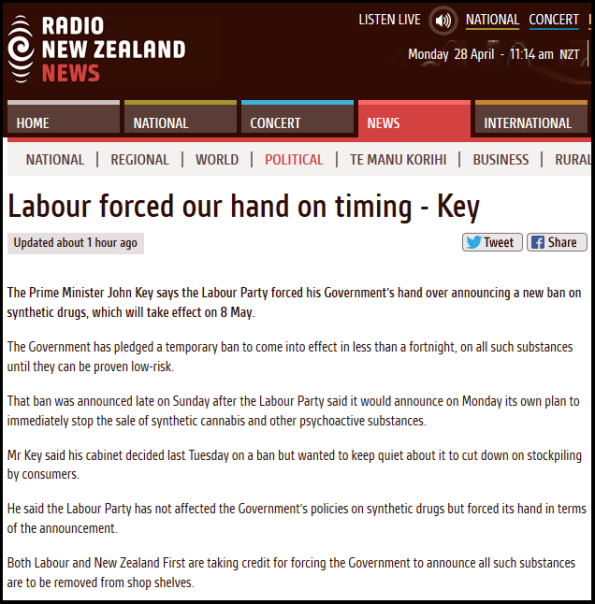 Who would have thought that after eight years in Opposition, Labour still wields such powerful influence? Who thought it possible to govern from the Opposition benches?

Which is all rather ironic, as Dear Leader is pushing Heaven, Earth, and Planet Key to support Helen Clark as the U.N.’s next Secretary General;

“There are major global challenges facing the world today and the United Nations needs a proven leader who can be pragmatic and effective.

Coming from New Zealand Helen Clark is well placed to bridge divisions and get results. She is the best person for the job.

I’ll do everything I can to get her over the line.

If Helen became the next secretary general of the UN New Zealanders would celebrate in the same way they celebrate Lorde for her singing and Lydia Ko in golf.”

Most people would say she was a very strong prime minister for nine years and she’s done a great job in the last seven years at UNDP.”

“If they’re doing that, that is everything that’s wrong with the United Nations because, for goodness sake, let’s get the best person in the job…

I still think anyway if its a drag race between Kevin Rudd and Helen Clark, New Zealanders, and I reckon a hell of a lot of Australians, know who the best candidate is.”

Wow! Is this the same Prime Minister of a previous Labour government that Key blames all New Zealand’s economic and social woes?

It’s the fault of those “lazy benes”. And/or Housing NZ tenants. It’s their fault that poverty has increased; wages have remained low; the income/wealth gap has widened; that there is over-crowding and homelessness.

Of course it’s their fault. Key said so;

“But it is also true that anyone on a benefit actually has a lifestyle choice. If one budgets properly, one can pay one’s bills. And that is true because the bulk of New Zealanders on a benefit do actually pay for food, their rent and other things. Now some make poor choices and they don’t have money left.”

Didn’t you know that government social and fiscal policy is set by  WINZ beneficiaries  and Housing NZ clients?!

Unemployment is still high (even with Statistics NZ fudging unemployment stats). It’s the GFC, stoopid, as Key pointed out;

“We did inherit a pretty bad situation with the global financial crisis. We have had three terrible earthquakes in Christchurch. We have had the collapse of finance companies. We have had to bail out what is, in terms of the earthquakes, the single biggest economic impact on a developed economy as the result of a disaster. The public don’t agree with every decision… but I think they believe on balance it’s been a tough three years and we’ve handled most things well. The second thing is it’s all relative. Yes, our unemployment went to 7 per cent and now it’s 6.5, but in America it’s 9 per cent officially and 14 per cent unofficially and in Spain it’s 20 per cent… “

“While I think we have to acknowledge that the last three years have been pretty tough with the Global Financial Crisis, on a relative basisNew Zealand’s been doing a better than a lot of other countries.”

Of course, Deflection #3 has a limited shelf-life, and sooner or later the public and media will wise-up to the fact that the Global Financial Crisis event was eight years ago.

Time for another handy international crisis?

Deflection #4: The Auckland Council/RMA done it

When it comes to Auckland-related problems such as housing unaffordability; homelessness, and over-crowding, the Nats have a geographic-specific Deflection solely set aside for that contingency; 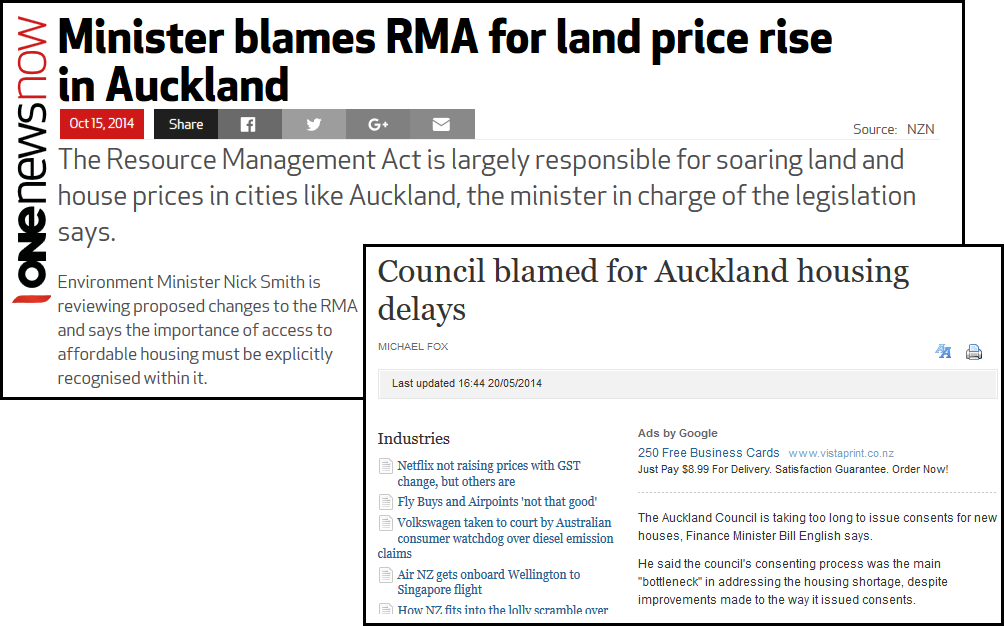 Deflection #4 is better than ‘Persil‘ at removing embarrassing and unsightly, Auckland-issue credibility stains…

But now, in a masterful, brilliant stroke of creative political bullshit-artistry, Dr Smith has come up with a brand new Deflection category.

Deflection #5: The birds done it!

In a speech on 30 August, Dr Smith was at pains to rationalise away his government’s abject failure at cleaning up New Zealand’s heavily polluted waterways. His surrender to a future of rivers so contaminated with animal faeces and harmful micro-organisms that they can no longer be  swum in, was summed up when he lamented;

“A national requirement for all water bodies to be swimmable all of the time is impractical. Most of our rivers breach the 540 E. coli count required for swimming during heavy rainfall.”

The target to blame? Birds.

“We’ve got water bodies like the Washdyke Lagoon here in Canterbury and Lake Papaitonga in the Manawatu which are home to many birds whose E. coli make it impossible to meet the swimming standard without a massive bird cull.”

Expect to hear more of Deflection #5 in future, as the chorus of complaints about our rivers and lakes continues to grow.

Never let it be said that National cannot find a convenient target to deflect blame onto, whenever a situation demands it;

Obviously, any chance of National taking responsibility for the mis-management of our waterways is… for the birds.

But the public, the media, and environmental groups will not allow Smith to escape his responsibilities. He will be held to account and reminded of his failures at every turn. Like New Zealand’s polluted, unswimmable  waterways, his Environmental portfolio has become utterly toxic.

Reuters: NZ Prime Minister says central bank should get on with housing measures

NewstalkZB: Govt accused of blaming Auckland Council for its own failings on housing

The Daily Blog: When Nick Smith said making every river swimmable ‘was not practical’ did a little bit of you die?

The Standard: Water quality too important for bird-brained excuses