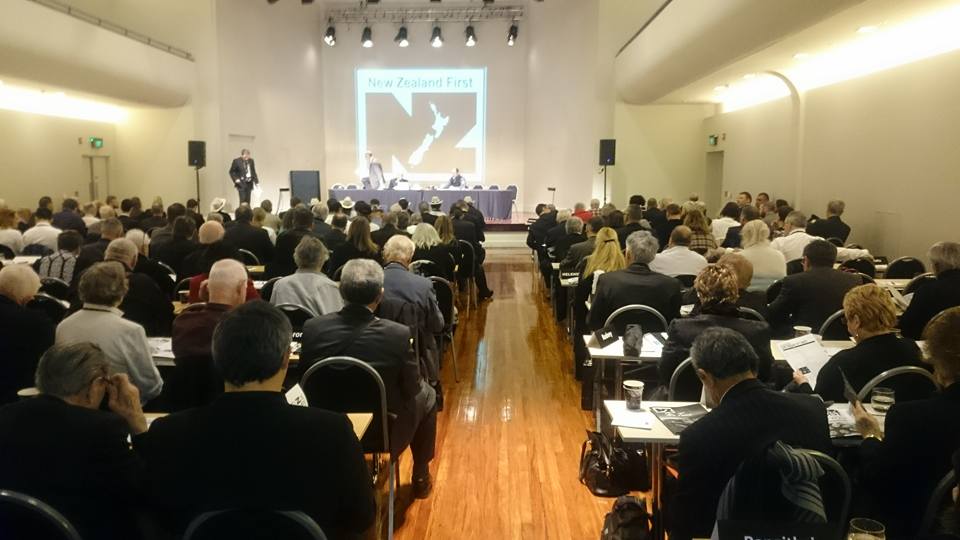 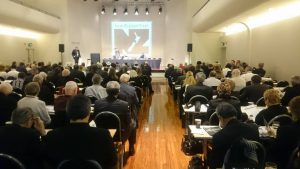 As I covered in yesterday’s part one of my NZ First Convention writeup, ours is a party often bedeviled by woeful (and frequently media-fostered) misperceptions as to who we are, what we’re about, and what we’re actually like ‘in the flesh’. We’re often presented as being a fairly hollow if not outright skeletal organizational structure that’s little more than a cob-web for Winston to perch, spider-like on top of.

Now obviously, if you’ve read my article from Saturday morning, you’ll know that that’s plainly not the truth. Winston remains an important – even integral and for now indispensable – figure in the Party. But thanks in no small part to the culture-change which has accompanied Ron Mark’s elevation to the Deputy Leadership, we now feel very much more like an actual, functional, and filling-out Party with brigades of motivated volunteers exercising individual initiative and planning.

Just as it should be.

But if that’s how I lead in to my Convention coverage, Day One on the Convention Room Floor has only served to exacerbate my perception that there’s a growing gulf between the hidebound image many people have of New Zealand First and who and what we actually are today.

We’ll start at the start and work our way through.

The day began with an opening and welcome ceremony conducted largely, if not entirely, in Te Reo. Representatives from local government and Iwi received a delegation from New Zealand First before the commencement of the opening address; which was responded to in kind by a lengthy answer (also entirely in Te Reo) from one of our own MPs – Pita Paraone. Now, in twenty first century New Zealand it’s pretty mundane for a political or civic occasion to be kicked off with Maori cultural protocol (although perhaps rather rarer for both the welcomers and welcomees to be quite happily conducting everything in the original language of this land without recourse to the de facto lingua franca). But considering the bad rap NZF often gets as a benighted home for barnacle-encrusted aging white rednecks … the fact that we have personnel who regularly and habitually communicate in fluent Te Reo front and center of our organization ought to say something.

Namely, that the stereotype is not exactly factually based. As you’d presumably expect for a Party whose Parliamentary Caucus is about 50% Maori.

Once the opening was completed, our MC for the morning noted that in his estimation, this weekend’s gathering apparently represents the largest Party Convention we’ve held in almost twenty years. I wasn’t around (politically, at least) in the mid-late ’90s, so I cannot safely verify such a claim. But in my spirit of due diligence, I counted up the number of seats and delegates laid out in the hall and arrived at a total in the low-mid two hundreds (with the number of NZF folk in attendance set to increase once more for tomorrow) – from an apparent total of fifty electorates nationwide.

The misconception I seek to highlight with the above is not simply New Zealand First-specific, but rather applies to our entire system of party-electoral democracy at large. Everywhere, we are told that common participation with our political system is … basically dying. That flagging voter-turnout rates suggest a slow slide into oblivion for our established electoral vehicles and the systems which empower them. Perhaps, macroscopically, this might be the case. But in this room this morning, I instead saw a strong counter to that trend – more people, from more backgrounds and walks of life, taking an active interest and putting in the reasonable effort to ship themselves potentially all the way to the other end of the country in service of our chosen cause.

Maybe it’s just New Zealand First who’re enjoying an energizing boom in both number and commitment of ‘ordinary’ party members. But even if that’s the case, the previous media leitmotif of NZF being “the dying party” when it came to our membership (take of that however you will) … is clearly strongly inaccurate, indeed (particularly in light of the ongoing presence of an array of younger faces in both the early-20s and early-30s/40s demographics).

Next year’s Convention up in Auckland will, undoubtedly, be larger again due to greater ease of access, greater proximity to some of our larger membership-bases etc.

Moving through the day into the Policy Remit Sessions, we kept having stuff happen which made me stop and go “well THIS doesn’t seem congruent with how we’re often painted in the popular imagination…”

Probably the first such instance was when the Whanganui Electorate’s remit covering the provision of “low THC medicinal marijuana” (and in particular, the Charlotte’s Web strain occasionally turned to in the US for the medication of serious and ongoing seizures in children). This was intriguing not just because it passed – thus showing to the world and assembled news media that New Zealand First can get in behind sensible drug policy which once, a decade ago, would have probably been the semi-exclusive preserve in Parliament of the Greens … but that there evidently exists out there in the NZF membership a group of concerned members who’ve put considerable time and effort into researching medicinal cannabis and attempting to find particular uses for it where other modern medicine is potentially lacking.

In other words, we are quite clearly no longer a Party who’ll simply bite-back against any hint or suggestion of drug law reform with a burning, knee-jerk vengeance. An impression amply and more than adequately confirmed for me when a follow-up remit from Papakura which would have sought to comprehensively prohibit in the long term even medicinal marijuana (and, for that matter, the legalization for recreational use of cannabis) … was voted down rather strongly after I rose to speak vociferously against it.

Other interesting aversions-to-type came with a slew of interrelated remits from the Rotorua electorate which fit the mold of a generic ‘tough-on-crime’ and strong ‘law-and-order’ stance party. I won’t go into the details, but suffice to say they were dedicated to calling for the constant lifetime GPS monitoring of convicted paedophiles, those with a history of domestic violence etc. There’s obviously a strong ethos of ‘keeping communities safe’ out there in the Party’s gestalt political psyche which is responsible for remits such as these coming forward in the first place … but the rational, reasonable – and even compassionate – series of debates and remarks which ensued amongst Party members before these remits were eventually failed serves to indicate rather tellingly that even on a core issue-set such as law and order or justice policy … we are not exactly as we have been imagined. (Oh, and don’t believe Nicholas Jones’ sub-article over at the NZ Herald about the remit-process. The GPS monitoring of those with a history of domestic violence remit, contra to his assertion, didn’t pass)

Most other remits were about what you’d expect from an economically nationalist party, and included innovative proposals to help out primary industries, use Post-War style housing bonds to finance the construction of new state housing en-masse, and alterations in taxation policy designed to directly assist some of our most vulnerable citizens.

But there were, again, a few which bucked the mould. One of these was what worked out to be a proposal to steadily phase out and eventually abolish battery hen farming. It turns out New Zealand First people really do care about animal welfare – and that we don’t mind potentially taking a bit on the chin from some farming interests in order to do so. I can’t give it full marks for compassionate policy-making because it’s not a straight-up and fairly immediate ban – but once again, perhaps something other than what you might expect.

Further surprises were to be had in connection to a pair of policy-remits from the Wairarapa. Now admittedly, New Zealand First has long had a philosophical enthusiasm for protection of the environment – as evinced by the commitment to same in our foundational principles. So remits talking about reducing pollution would be fairly ordinarily explicable. However, considering some previous positions held by certain MPs not five years ago concerning the reality or otherwise of climate change, it could come as a bit of a surprise to hear Ron Mark talking positively about transitioning energy away from coal, and the desirability of combating climate change.

It was also interesting, towards the end of the day, to hear a remit objected to by one of our MPs on grounds that the proposal would have been “disrespectful to the Treaty of Waitangi” (this from a Party which ten years ago put forward a Treaty of Waitangi Principles Deletion Bill in Parliament), and roundly rebuffed by the Floor for acting as a perceived attack upon the rights and heritage of Maori.

Anyway; there’s no doubt a litany of further examples I could delve into (including Tracey Martin making a very, very good speech on education policy) … but it’s presently 2 a.m, and I’m running on roughly eight hours’ sleep over the last three days. So I think we’ll call it there.

Suffice to say that today reaffirmed for me in oh so many ways that there really are *two* New Zealand Firsts:

First up, the one a lot of our critics conjure in their minds and imaginations. The irrational, reactionary, knee-jerk (or, possibly, knee-replacement) brigade of bigotish-inclined older while folks who’re slavishly devoted to the Gold Card powered hive-mind of pro-Winston idolatry …

… and second, the *actual* New Zealand First which represents a perhaps surprisingly multi-ethnic (and at the very least, very strongly biracial) grouping often seemingly prone to caring about the environment, the economy, and the New Zealanders who find themselves inhabiting both. All while operating demonstrably independently from the Chief – and having lively, vigorous internal debate as to determine our own future heading.

I certainly know which political party *I’d* rather be part of!

Good thing I already am 😉